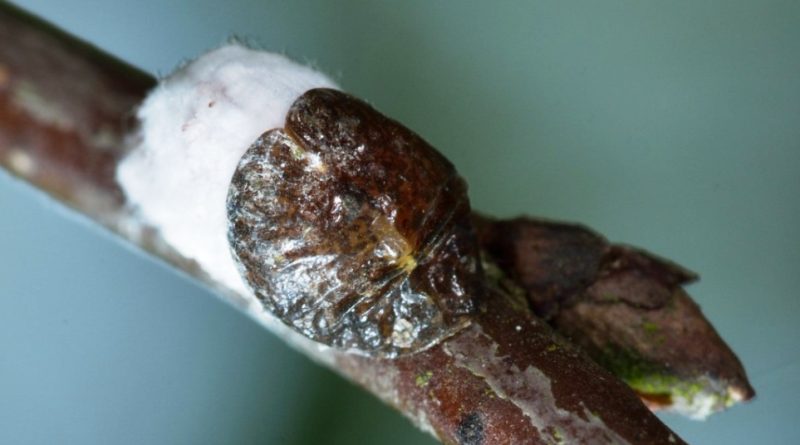 The Cottony vine scale (Pulvinaria vitis Linnaeus, 1758) is an insect belonging to the Coccidae family.

Geographic Distribution and Habitat –
The Cottony vine scale is a cochineal native to Europe and may have been introduced in North America before 1897.
It is a phytophagous insect that develops on some plants such as: Vine, Maple, Hazel, Birch, Ash, Alder, Poplar and other ornamental and forest deciduous trees.

Morphology –
Pulvinaria vitis is a Coccidae that is recognized for having a shield-like body, brownish in color, ovoid in shape and visible above all on the shoots, on the branches and on the fruits.
The adult females are about 6 mm long and produce a clear, waxy and flaky whitish ovisacco, placed between the body and the attached organ; consequently, the shield, increasing in volume, raises the ovipack in the front, highlighting the egg sac under it, which can contain thousands of wine-red eggs (up to 3000).
The masculine forms, however, less frequent, are equipped with wings and furniture.

Attitude and Life Cycle –
Pulvinaria vitis reproduces mainly by parthenogenesis; only rarely is it fertilized by the male forms.
The eggs are laid in May-June, then the freshly shelled juvenile forms are dispersed on the leaves (mainly along the ribs of the lower page), on the petioles, or along the shoots.
The insect overwinters as a young female (neanide) protected under the bark of the shoots and completes development in the following spring.
The females produce the ovisac under the body; from these eggs, at the end of summer, the nymphs are born which are carried on the leaves and then, very soon, on the twigs where they overwinter.
Therefore, the insect makes only one generation a year and overwinters.
The damage, in the case of consistent infestations, is however limited and essentially consists of the consequences of the trophic punctures carried out on the affected organs: in the rare cases of the appearance of colonies in massive form, asphyxiation can occur due to the layer of flaky colonies that envelop the affected organs and for the emission of abundant sugary honeydew which attracts the ants and on which the fumaggini develop; blackish mushrooms that stain the vegetation and the clusters. In addition, the insect takes sap from the plant with consequent weakening of the latter. It should be remembered that Pulvinaria vitis is able to transmit some harmful viruses to the vine such as the leaf curling virus.

Ecological Role –
The Cottony vine scale is a coccide, however not very widespread against which struggle programs are hardly implemented.
However, in the case of particular infestations in the past (up to 2000) it was customary to do, at the end of winter, a treatment based on DNOC or with activated white oils, or with polysulphides, wetting trunks and branches well with the insecticide.
Today it is advisable to intervene in the preventive management of crops, avoiding, as much as possible, nitrogen fertilizers (which soften the plant tissues and increase the palatability of the plants), with less specialization in crop investments, with the presence of hedges in the edges of the fields (which host parasite idi useful) and with other agroecological techniques that decrease the virulence, in general, of infestations.
It should be remembered, in fact, that an increase in the biodiversity of the fields favors the biocenosis of parasites and predators that are able to exercise a large measure of control.