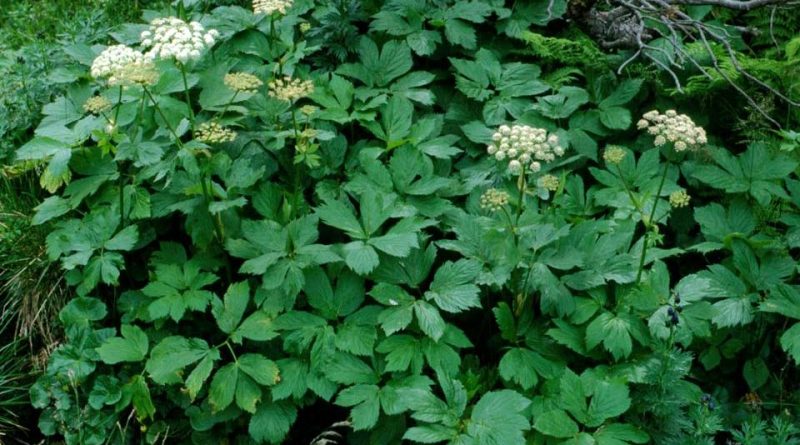 Etymology –
The term Peucedanum comes from the Greek πεύκη péuce pino and from δανός danós arid, dry, dry.
The specific epithet ostruthium is the transformation into an epithet of the genus Ostruthium, probable medieval corruption from Astrantia, which in turn comes from the Greek ἀστήρ astér astro and from ἄνϑοϛ ánthos fiore: for the inflorescence wrapped in petaloid bracts arranged in a radial pattern that make them take on the appearance of a single star-shaped flower; less certain is the derivation from the Greek στρουθός strouthós ostrich, sparrow, referring to the shape of the feathery petals (or leaves?) like the feathers of birds.

Geographic Distribution and Habitat –
The Masterwort is a plant native to central and southern Europe including the Carpathians, the Alps, the northern Apennines, the Central Massif and the isolated massifs of the Iberian Peninsula. However, it has been widely introduced and cultivated and its area of ​​origin is therefore not entirely clear.
Its habitat is that of fresh mountain meadows and woods, in the Alps or in the Apennines, it rarely grows lower but, normally, between 1300-2000 m. s.l.m .. 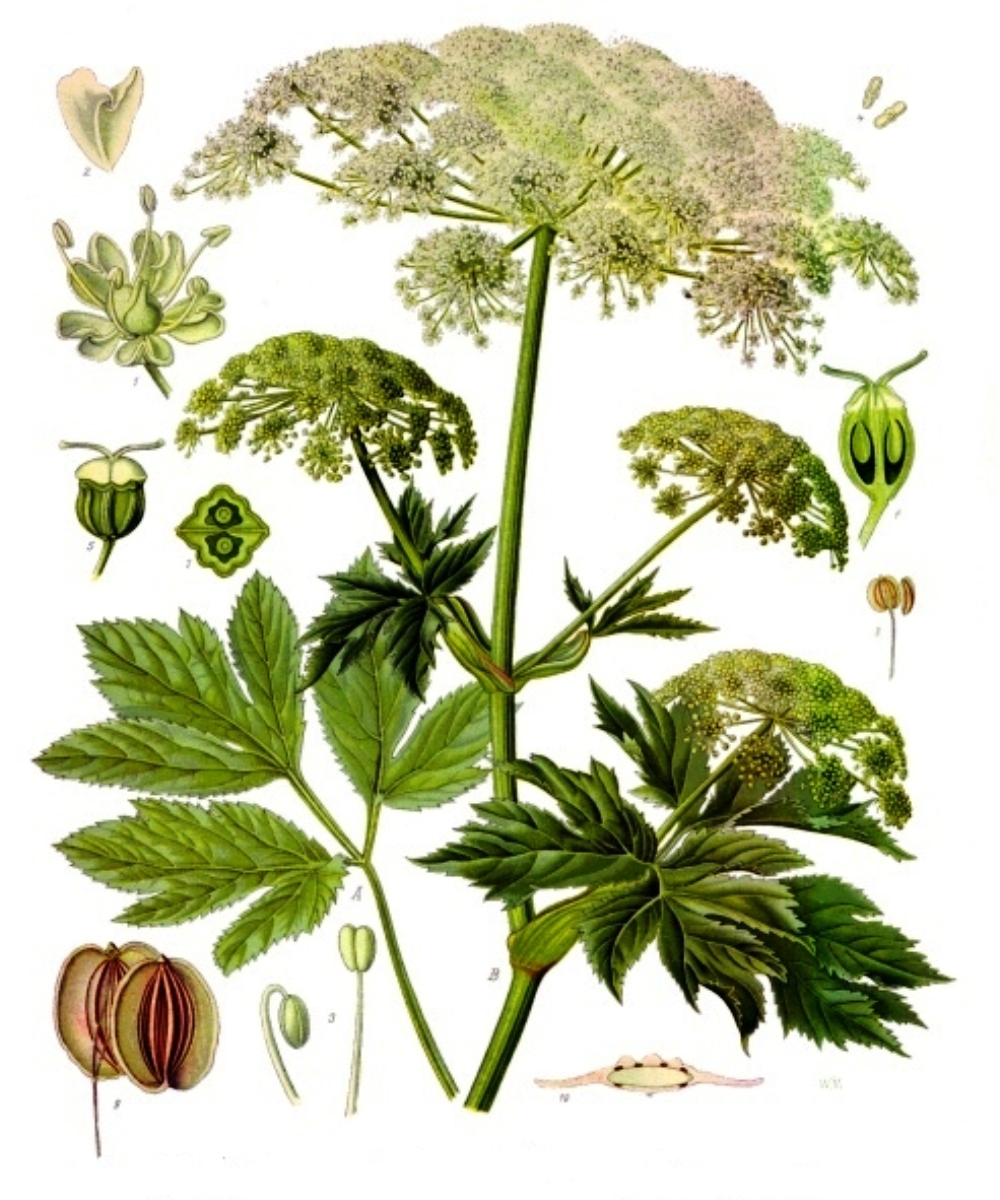 Description –
Peucedanum ostruthium is a herbaceous plant, perennial, glabrous, with tuberous root, with an erect stem 40–80 cm, fistulous, striated, cylindrical, scarcely branched on the upper part, with alternate branches and the highest opposite.
The leaves are bright green on the upper side and pale green on the underside, a little rough on the ribs, the lower ones long petiolate, compound tripennate, with oval or oblong leaflets, petiolate, often lobed, serrated, the upper ones small and sessile and carried by a swollen sheath.
The flowers are white or pink and collected in large umbels of 20-40 delicate and very unequal rays, with a null envelope and involuncles of linear and deciduous bracts. The calyx has 5 minute teeth, corolla with expanded, overturned heart-shaped petals with inflected and depressed apex. Stamens longer than the corolla, spheroidal anthers, ovary with conical stylopodium, bifid at the apex and styles initially papillary, then elongated and curved in the fruit.
The antesis is in the period of July – August.
The fruit is a polachenary (diachene) of 4-5.5 x 4-4.5 mm, clear, with a suborbicular or elliptical outline, with mericarps with 3 ribs, whitish, and wings 1.1-2 mm wide, as large as the rest of the mericarp.

Cultivation –
Peucedanum ostruthium is a perennial plant that has been harvested and used for some time for local use as a food source and in traditional medicine.
Skin contact with the sap of this plant can cause photosensitivity and / or dermatitis in some people.
It is an easy to cultivate plant that grows in any non-arid soil and in a sunny position; in fact, he does not love the shadow.
This plant was once grown as a pot plant and for medicinal purposes while now it is an almost abandoned practice.
However, it is a suitable plant for plantations in natural gardens and with recovery of biodiversity.
Propagation occurs by seed which can be sown directly in the open field or in a seedbed at the beginning of spring.

Customs and Traditions –
Peucedanum ostruthium is a plant traditionally used for both food and medicinal purposes.
For food use the cooked leaves are used but it is also used as a herb or as an aroma; the aromatic roots can in fact be used as a flavoring; they have a spicier flavor than pepper.
From the fermented roots a particularly popular drink is obtained.
For medicinal use it is a plant that is little used today in modern herbal medicine, but it could be an herb that deserves further investigation.
It was held in high esteem in the Middle Ages, where it was particularly appreciated for its ability to resolve all flatulence in the body and stimulate the flow of urine and menstruation.
It was also used in the treatment of rheumatic conditions, shortness of breath, kidney and bladder stones, water retention and wounds.
The root has the following properties: antispasmodic, aromatic, bitter, strongly carminative, diaphoretic, digestive, diuretic, emmenagogue, expectorant, febrifuge, stimulant and stomachic.
It is useful in the treatment of asthma, dyspepsia and menstrual disorders. An infusion helps relieve migraines.
An essential oil is obtained from the plant which has a euphoric and odontalgic effect; it is used externally and relieves skin irritation. When used externally, the plant or essential oil extracted can cause an allergic reaction to sunlight.
Furthermore, a homeopathic remedy is obtained from the roots.
The rhizome contains ethereal oil, terpenes, phellandrene, limonene, pinene, and ethers of isobutyric acid, isovaleric acid, formic acid, acetic acid and palmitic acid free of odor and similar to that of angelica with a bitter and aromatic taste. It also contains many lactones such as ossipeucedamina, ostrutin, ostrolo, ostruttolo, imperatonina, isoimperatorina. Finally, there are tannin substances, mucilage, gums, fatty oil.

Preparation Method –
Peucedanum ostruthium root is harvested in spring or autumn and dried for later use.
In Savoy it is chewed against migraines. The essence is also used in the preparation of some liqueurs such as Chartreuse and Benedictine.
In cooking, the leaves and roots are used as a condiment. The plant is also used to flavor some types of cheeses.
The root of the imperatoria, cooked in wine, is currently used in Switzerland. Furthermore, it has expectorant and aperitif properties which are irrefutable; chewed, it stimulates salivation.