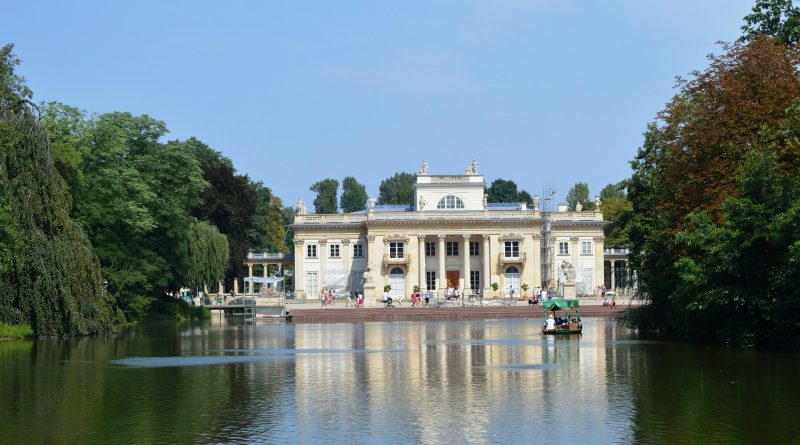 Poland is a state located in central-eastern Europe, a member of the European Union, NATO and the UN. Poland has a population of 38,485,779 (2019) and an area of ​​312,696 km².
The capital of Poland is Warsaw with 1,764. 615 inhabitants (2017).
Poland ends up with Germany to the west, the Czech Republic and Slovakia to the south, Ukraine and Belarus to the east, Lithuania and the Russian exclave of Kaliningrad to the north; to the north it is bathed by the Baltic Sea.
Poland, which is part of the Schengen Agreements, was admitted to NATO on 12 March 1999, while it entered the European Union on 1 May 2004.

Geography –
Poland is located in the contact area between the German and Sarmatic lowlands, Poland faces the Baltic Sea to the north, and borders on the north with the Russian exclave of Kaliningrad and Lithuania, to the east with Belarus and the ‘Ukraine, to the south with the Czech Republic and Slovakia, to the west with Germany.
The territory has a quadrangular shape, with an extensive plain in the north, hilly in the center and mountainous in the south. The flat section, to the north, covers almost half of the total surface, shows slight undulations on 200-300 m and is dotted with numerous small lakes of glacial origin (over 9,000). The Polish lowland, in fact, a continuation of the Germanic one, consists of the continental base entirely leveled by erosion, subsequently corrugated by the Hercynian orogeny, and then shaped by the glacial expansions of the Scandinavian shield which deposited a pebbly and sandy morainic layer. The plain overlooks the Baltic with a low coastline which, from the Gulf of Szczecin to the Bay of Gdansk, is uniformly cordoned by sand dunes that delimit ponds and brackish marshes or large lagoons.
The hilly median section constitutes a transition area and assumes the appearance of a plateau between 400 and 500 m furrowed by short and modest alignments. These are generally ancient Hercynian reliefs, worn by erosion, often covered by a deposit of loess, which in more than one case contain important mineral and coal deposits. Finally, the southern mountainous area includes the northern slopes of the Sudetes and Beskids. The former, put in place by the Hercynian orogeny, appear modeled in very soft shapes and culminate at just 1602 m with the summit of Sněžka. They are separated through the Porta Morava by the Beskids, which, belonging to the Carpathian arc corrugated by the Alpine orogeny, are higher and with more rugged shapes (Babia Góra, 1725 m).
As for hydrography, Poland has a very dense network of watercourses that flow almost entirely into the Baltic Sea, dividing into two main basins: that of the Vistula, which with its 1047 km represents the largest course of water of the country, and the Oder (780 km), which originates in Polish territory and drains the waters of the Neisse, the Warta and the Noteć.
The Vistula, which develops its course entirely in Polish territory and drains about three fifths of it, as well as the Oder and some sections of the tributaries, thanks also to a network of artificial canalizations connected to the German and Belarusian hydrographic networks, is largely navigable despite the irregularity of the flow strongly dependent on the climatic conditions.

Climate –
Poland is characterized by a climate with distinct continental features that determine strong seasonal temperature variations (17 ° C on average), with very hot summers and very cold winters characterized by snow cover that lasts for three or four months a year. . Precipitation, scarce in the lowlands and with a tendency to increase going south, reaches its highest level in the summer, while it is almost absent in the autumn. 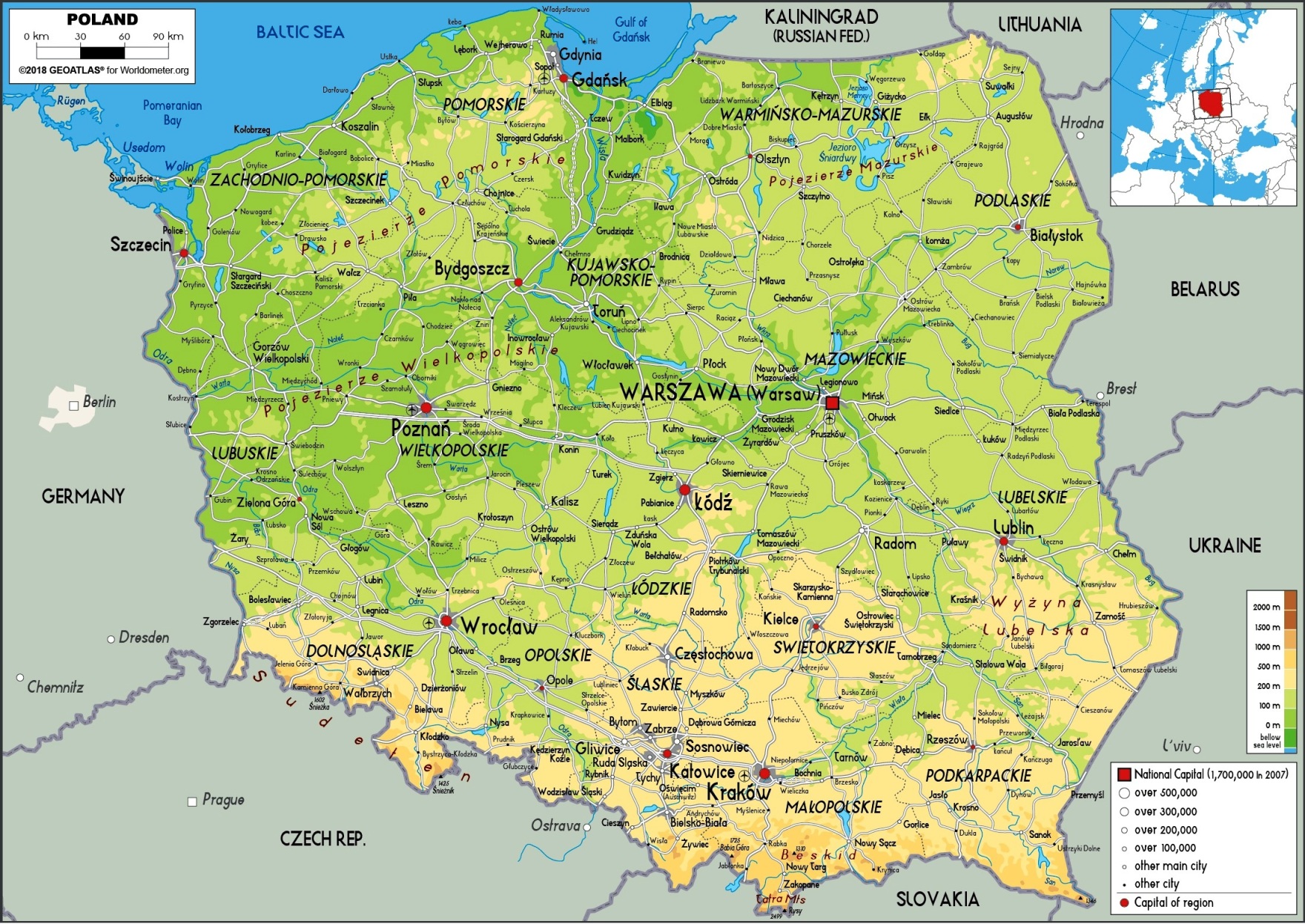 Flora –
The altimetric trend and climatic conditions reverberate on the phytogeography of the Polish territory which is affected by a considerable variety of species even if, schematically, elements of the Atlantic type prevail in the areas west of the Vistula, and elements of the Pontic steppes in those to the east. . The wooded areas, now very small, are characterized by the presence of boreal essences (pines and alders) in the coastal areas and by broad-leaved trees (beech) or mixed in the southern areas.
It is one of the European countries with a relatively rich biodiversity. There are around 28,000 species of fungi and plants.
The country also has a relatively low level of industrialization compared to other European countries, a situation which has facilitated the conservation of flora and fauna. The coast of the Baltic Sea, the Carpathian Mountains and the mixed forests of Poland are home to local flora and fauna.
The Montane Conifer Carpathian Forest ecoregion encompasses the Carpathians in Poland. The forest is characterized by coniferous trees, which thrive in the cold temperatures of the mountains. The region’s climate is moderately cold and humid on average, and rainfall and temperature change with elevation.
The mixed forest of Central Europe, on the other hand, is characterized by a mixture of deciduous and coniferous trees. Pine, oak and beech trees abound in the area. Scots pine species are the most dominant tree in the region. Annual rainfall in the region is between 500 and 700, while average annual temperatures range from 7 to 9 ° C.
The Baltic Mixed Forest ecoregion is classified as part of the temperate deciduous and mixed forest biome. The region is dominated by sub-mountain beech and mixed beech woods, alongside oak, sycamore, maple and ash trees. The forest is found in the northern regions of Europe, especially in the countries of Germany, Poland, Denmark and Sweden. The ecoregion has been listed as critically endangered primarily due to human invasion.
The Northeast Atlantic Baltic Sea is a marine ecoregion in the Baltic Sea, connecting the country to the Atlantic Ocean.
Polish ecosystems face a number of environmental threats. Pollution of the country’s water through the discharge of chemicals and the penetration of pesticides is a major threat to the country’s marine life. Habitat loss, environmental pollution through the release of toxic gases, the rapid industrialization of the country’s forests and agricultural lands continue to threaten the sustainability of Poland’s flora and fauna. The country has been actively involved in conservation efforts. Through specialized environmental agencies, national parks and reserves have been established and continue to be efficiently managed in Poland. Constant monitoring is also carried out in the country to determine the environmental status of various flora and fauna.

Fauna –
The fauna of Poland does not present particularly original characters, as the various species typical of central Europe are present, although it is worth noting, in addition to various ungulates, a numerous colony of European bison in the forest of Białowieża, the park that together with that of the Masurian lakes and the Polish Tatras, as well as numerous other reserves, mostly in the central and southern areas, protects the protection of natural environments of particular value against a particularly incident anthropogenic presence.
The Montane Conifer Carpathian Forest ecoregion encompasses the Carpathians in Poland. Wildlife in the area includes the European bison, lynx, brown bears, wolves and the wild cat. Tourism activities, deforestation and air pollution have been identified as threats to the sustainability of the ecoregion.
Central European mixed forest provides habitat for a variety of fauna, most of which are endangered. The European bison, bears, wolves, lynx and black grouse are present in the region. In the ecoregion is the Bialowieza National Park in Poland, which was established to preserve the area’s unique flora and fauna. Much of the ecoregion has however been degraded in place of agriculture and human settlements.
The Northeast Atlantic Baltic Sea of ​​the Baltic Sea is a marine ecoregion that is home to an abundance of marine life. Whale species such as the Beluga whale, Blue whale, Minke whale, Bow whale and Killer whale are found in the ecoregion. The Atlantic puffin, Porbeagle shark, Capelin, gray seal and arctic char are found among the various species of marine fauna found in the ecoregion. The ecoregion has been listed as dangerously endangered, with major environmental threats from overfishing and pollution. Several projects have been launched in the Baltic Sea to map marine biodiversity in an effort to conserve marine life.
Poland is ultimately home to nearly 35,000 animal species Of all animal species, 700 of them are vertebrates, and out of 100 of these are endangered. Small-scale agriculture characterizes much of Poland and this has contributed, in part, to supporting indigenous crops and animal species. Poland has the largest European populations of the European bison and the water warbler.