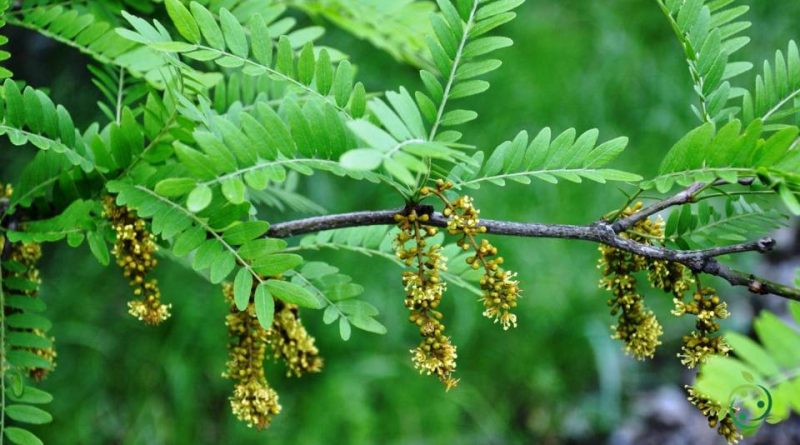 How the Honey locust is grown

Honey locust (Gleditsia triacanthos L.) is a plant of the Fabaceae family native to North America, where it forms mixed thermophilic broad-leaved woods. It was introduced in Europe in the mid-eighteenth century, it is now a widespread species in parks and also in road trees. Also in Italy, in the north and in the center, it tends to become spontaneous, forming small populations along the railway tracks and the escarpments.
This plant produces unisexual and bisexual flowers on the same tree, arranged in axillary racemes of about 10 cm, provided with a sketch of corolla from which stamens and pistils protrude for a long time.
The fruits are lomenti, a sort of indehiscent legumes that fragment into articles containing one seed each, ribbon-like and up to 40 cm long, flat and twisted, which hang on the trees for a certain time before falling and crumbling.

Cultivation –
Honey locust is a plant that should be grown, possibly in a sunny place, or in partial shade. This plant can stand the cold, even if the young specimens should preferably be planted in spring, so that they are already developed and acclimatized when the cold arrives.
However it is a plant that adapts well to the harsh climate and also to polluted areas or where there is salt. It has spread to areas reaching 500 meters above sea level.
From the pedological point of view it is a plant that prefers loose and well-drained soils, even very poor or sandy. In general it has a good rusticity and for this reason it is able to adapt to situations that are not congenial to it. However, the plant should be placed in areas where water stagnation does not form which could be harmful.
As far as irrigation is concerned, except for the first periods of life in which an adequate root system must be formed, generally the Gleditsia triacanthos is satisfied with the rains, they overcome the summer drought well.
Younger specimens may need a greater amount of water, especially during the hottest and driest periods in order to develop at their best.
Before planting and then, every year, at the beginning of spring, it is good to provide the plant with organic fertilizer, possibly well-mature manure, or with granular fertilizer in order to provide all the nutrients necessary for better development.
Remember that it resists wind and salt, so it can be planted along the roads in seaside resorts and in the city. Thanks to the rapid pace of growth and its tolerance to bad environmental conditions, it is usefully used for planting in newly created green areas (new buildings, landfills, abandoned mines).

Uses –
The Honey locust is a tree resistant to atmospheric pollution and is a very popular plant as an ornamental species, used in parks and road trees, where it stands out for its majestic appearance and unique fruits.
This plant, being resistant to atmospheric pollution, lives in any well-drained soil and in full sun; it is suitable for large gardens, however avoiding cold locations, subject to severe frosts. There is also a thornless cultivar.
The wood is very dense and resistant: in the past it was used to build wagons and for railway sleepers. It still finds some use in the construction of handcrafted furniture. It is also excellent as a fuel. The plant with its many thorns can be used to create impenetrable and defensive hedges.
From a food point of view, please note that the pods are edible: they can be used as fodder for cattle. In the past it was used as a food by American Indians and to brew beer through fermentation. The internal seed is also edible and can be used in the kitchen when ripe; the whole pod, when still green, can be cooked because it is edible.
Finally, it should be noted that the plant contains an alkaloid called triacanthin. The medical interest of this substance was studied in the years 1960-70 without however leading to its therapeutic use. In 2019, a new study shows an effect, both in vitro and in mice, against bladder cancer.
Among other substances, the plant also contains polyphenols, triterpenes, sterols and saponins.