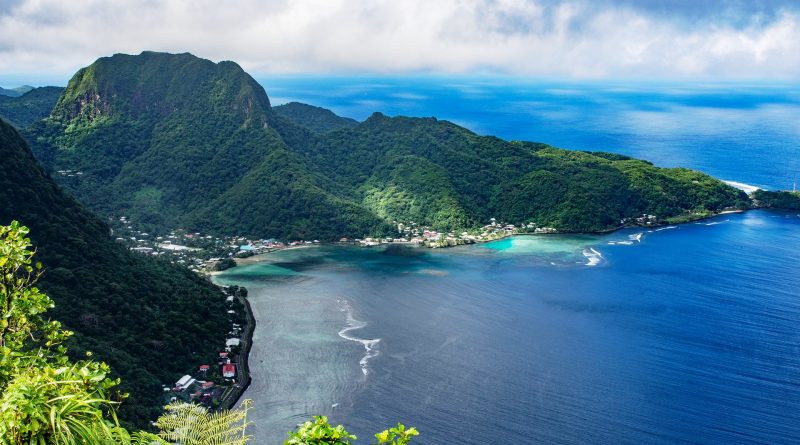 The National Park of American Samoa, whose WDPA Code is: 555556172 is a land and marine park present in American Samoa, an archipelago in the South Pacific, south-east of the State of Samoa and located in the Manu’a District.
The American Samoa National Park has a land area of ​​36 km², 10 of which are maritime areas, and is managed by the National Park Service.
American Samoa National Park is a national park spread over three different islands: Tutuila, Ofu, and Ta’u. Authorized by the Congress of the United States of America in 1988, it was effectively established on September 9, 1993 by the Department of National Parks on land leased for a period of 50 years by Samoan village councils. The main purpose of the park is the conservation of the unique natural resources of the Samoa Islands, especially coral reefs and tropical rainforests. This also allows for various physical activities such as snorkeling and scuba diving.

Geology –
The volcanic islands of Samoa that dominate the surface of the national park are composed of shield volcanoes that developed from a hot spot on the Pacific plate, sequentially emerging from west to east. Tutulia, the largest and oldest island, probably dates back to the Pliocene epoch, approximately from 1.24 to 1.4 million years ago, while the smaller islands are most likely from the Holocene age.
The islands are not made up of individual volcanoes, but are rather made up of overlapping shield volcanoes built from basaltic lava flows. Much of the lava that erupted has since broken into angular fragments known as breccias. Volcanoes emerged from the intrusion of basaltic dams from an area on the ocean floor during the Pliocene epoch and were heavily eroded during the Pliocene and early Pleistocene epochs, leaving behind trachyte plugs and exposed outcrops of volcanic tuff throughout the park. The island of Taū, the youngest of the islands included in the national park, is all that remains of the collapse of a shield volcano during the Holocene. This collapse produced sea cliffs over 900 meters high on the north side of the island, some of the highest escarpments in the world.
While the Samoa Islands have shown no evidence of volcanism for many years, the Samoa hotspot below the islands continues to give indications of activity, with an underwater eruption detected just east of American Samoa in 1973. The Vailulu’u Seamount, located east of Ta ‘ū, is a future Samoan island that develops from underwater lava flows, continuing the eastward progress of volcanic development from the hotspot below the islands. The lava flows that form the seamount have been radiometric dated between 5 and 50 years, during which time the seamount rose 4,500 meters from the ocean floor.
There is evidence of subsea and surface landslides modeled due to weathering and other forms of erosion of the rocks and soil that make up the islands. On Ta’ū Island, an inland escarpment known as Liu Bench (a mass decay feature) threatens to sink into the nearby ocean, an event that could produce a tsunami strong enough to wreak havoc on the Fiji Islands to the southeast.
Olivine basalts were extruded from a rift zone with a course of N. 70 ° E., oriented along the current Afono and Masefay bays of Tutuila, in the Pliocene or in the more ancient Pleistocene. The Masefau Dam complex and the astragalus breaches are the remnants of this fracture. The development of the shield domes of Taputapu, Pago, Alofau and Olomoana followed long parallel fissures, but when the peaks of Pago and Alofau collapsed, calderas formed. Thick tuffs were deposited in the Pag caldera and the southern edge was buried by lavas composed of picritic basalts, andesites and trachytes. Subsequent erosion in the upper-middle Pleistocene has enlarged the calderas, in particular the Pago river has carved a deep canyon, the precursor of today’s Pago Pago bay. An underwater platform formed by the erosive runoff allowed the development of coral reefs before the island was submerged from 180 to 600 meters. Sea level fluctuations continued into the Middle and Upper Pleistocene. A coral reef formed, was submerged at 61 meters, before emerging at 15 meters, leaving sea caves above sea level. The Leo volcanoes have erupted in recent times generating submarine tuff cones, such as Aunuu Island, and ash cones on the mainland. Pahoehoe streams buried the submerged coral reef, enlarging the island by nearly 13km2. Since then the island has emerged for another 1.5 meters.
Ofu and Olosega are the remains of a single basaltic volcano, 6.4 km from north to south and 9.6 km from east to west, which was formed in the Pliocene at the beginning of the Pleistocene. Remains of one half of the caldera, streams, form the north-central portion of Ofu. The steepest cliffs, over 180 meters high, are found on this northern coast. The Ofu-Olosega group of islands formed along the same trend rift N. 70 ° W. that formed Ta’ū, another single basaltic dome. The remains of the Ta’ū caldera are found on the southern coast. A cliff over 600 meters high marks the northern coast of this island.
Upolu was formed as an elongated basaltic shield volcano due to rifting from the late Tertiary to the late Pliocene along a course of S. 70 ° E. Remains of these eruptions form Mount Tafatafao, Mount Vaaifetu and Mount Spitzer. Volcanic activity renewed itself in the Middle Pleistocene along the same course as the rift, with olivines and basalt flowing north and south from a point about 13 km west of the center of the island. The Pleistocene ash cones, oriented east and west, are aligned along the central axis of the island. Savai’i lies along this same rift course, its surface marked by Quaternary lava flows. Examples include the olivine basalt cord lava that emerged from Mount Matavanu from 1905 to 1911 and the Mauga Afi chain of sketch cones from 1902. 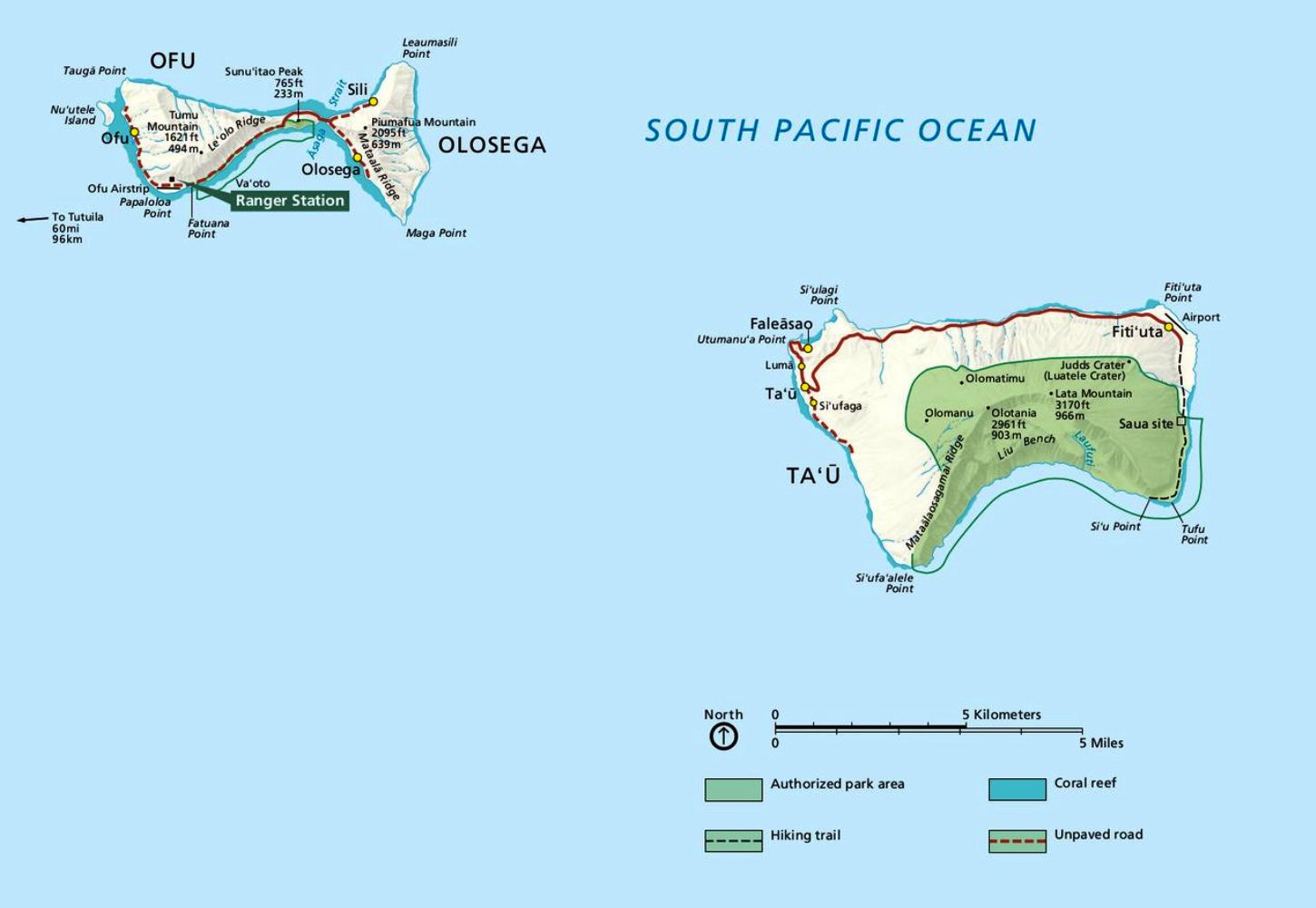 Climate –
The Samoa islands are located in the belt of the southern trade winds (mainly from the south-east), which moderate the tropical temperature, and with about 3000 mm of annual rainfall. The typhoon season runs from December to March.

Flora –
The islands are mostly covered by tropical rainforest, including rainforest in Taū and lowland forest in Tutuila. Most of the plants came by accident from Southeast Asia. There are 343 flowering plants, 135 ferns and about 30% are endemic plant species.

Fauna –
Due to its remote location, the American Samoa National Park area has a low diversity of terrestrial species. About 30% of the plants and one species of bird (the Samoan starling) are endemic to the archipelago.
The multi-colored fruit dove was found in the park.
Three species of bats are the only native mammals: two large fruit bats (Samoan flying fox and white-naped flying fox) and a small insectivore, the Pacific sheath-tailed bat. They play an important role in the pollination of island plants. The sheath-tailed bat was nearly eliminated by Cyclone Val in 1991. Native reptiles include the pelagic gecko, the Polynesian gecko, the mourning gecko, the stump gecko, the Pacific tree boa, and seven species of skinks. An important role for the park is to control and eliminate invasive animal and plant species such as wild pigs, which threaten the ecosystem of the park. There are several species of birds, the most predominant being the wattled honey eater, the Samoan starling and the Pacific pigeon.
Other unusual birds are the Tahitian petrel, the immaculate shrimp and the rare (in this locality) dove of a thousand colors.
As for marine life, the surrounding waters are filled with a variety of life, including sea turtles, humpback whales, over 950 species of fish and over 250 species of coral. Some of the largest living coral colonies (Porites) in the world are found on the island of Ta’ū.