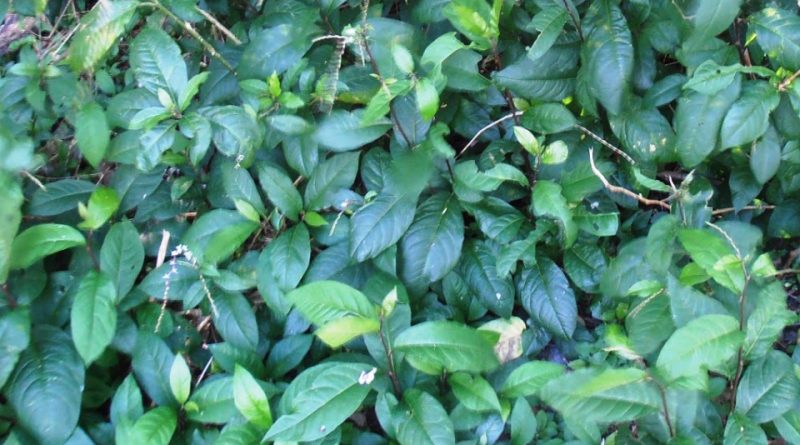 Etymology –
The term Petiveria of the genus was honored to the prelinean botanist and entomologist James Petiver (1658-1718).
The specific aliacea epithet comes from allium garlic, similar to garlic or due to the smell it emanates.

Geographic Distribution and Habitat –
Petiveria alliacea is the only species of the genus Petiveria and is a plant native to an area that includes Florida and the lower Rio Grande valley of Texas in the United States, Mexico, Central America, the Caribbean and tropical South America.
The species has been introduced in Benin and Nigeria.
Its habitat of semi-shaded roadsides and with rough, well-drained and undisturbed terrain.
In Jamaica it is present at altitudes from sea level up to 360 meters above sea level.
In South Florida it has been reported in troubled areas, marine, mesic, prairie and tropical areas, and shell mounds.
In Mexico, this plant is widely found on corn, coffee and apple plantations. 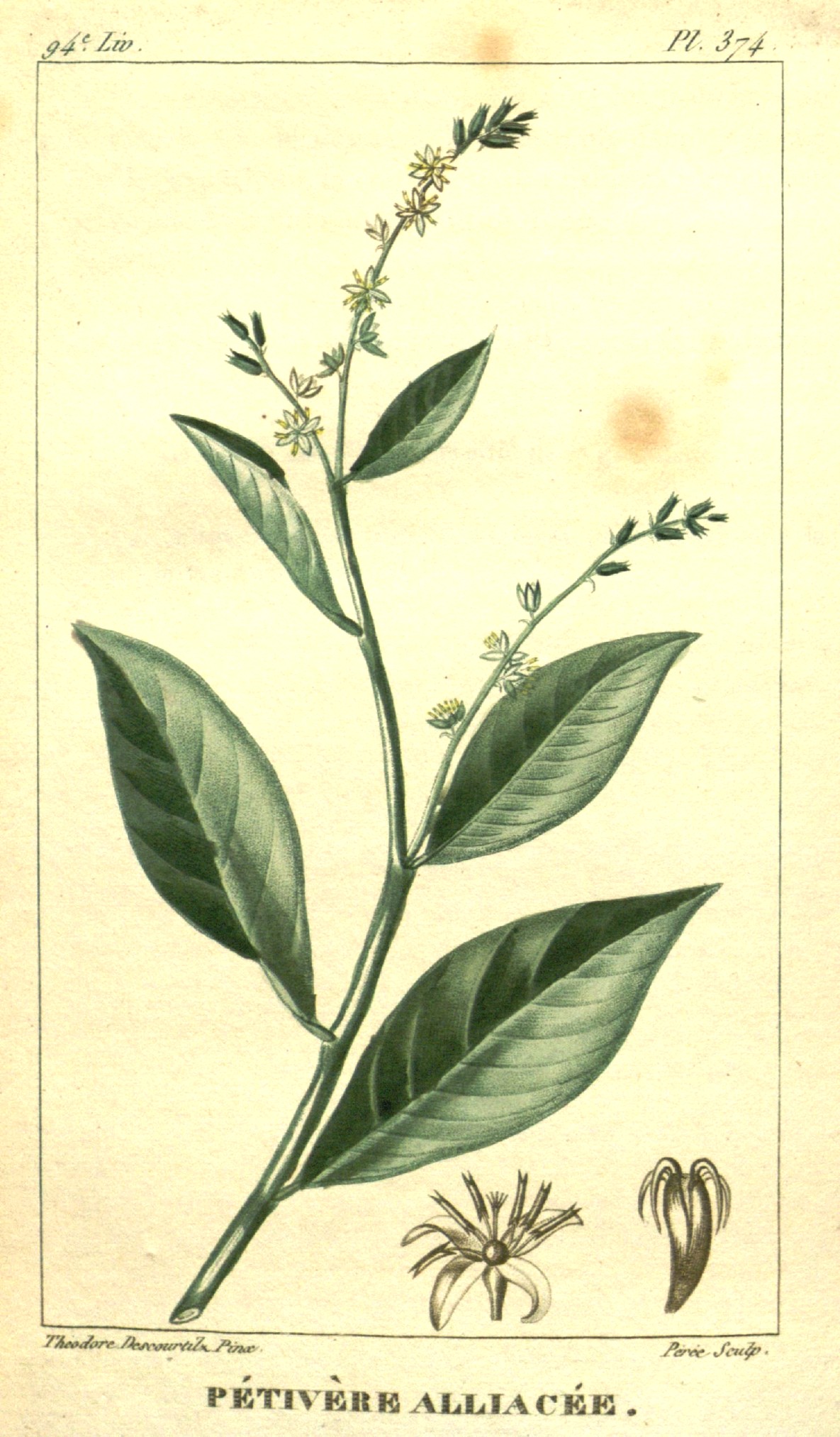 Description –
Petiveria alliacea is a herbaceous plant with a semi-shrubby, perennial habit, with deep roots that grows up to 1 m in height.
The leaves are simple, alternate, pinnate in the first order and reticulated in the second.
It has specific inflorescences composed of small greenish white flowers.
The roots and leaves have a strong acrid smell, similar to garlic that contaminates the milk and meat of the animals that graze there.
Although the plant is able to reproduce throughout the year, reproductive activity peaks during a geography-dependent part of the year. For example, in Mexico this period runs from September to October, while in Central America it runs from July to January.

Cultivation –
Petiveria alliacea is a popular medicinal herb in many parts of the tropics and is occasionally planted in gardens as an immediate source for medicinal use.
When handling this plant remember that the sharp thorns of the fruit can easily and painfully penetrate the skin.
The plant can accumulate nitrates and has caused nitrate poisoning in cattle.
For cultivation, it prefers rich, moist soil and a position in partial shade. The plant has established itself in many areas outside its original range in tropical Africa and Asia.
Propagation can take place by seed or by cuttings of semi-mature wood.

Customs and Traditions –
Petiveria alliacea is known by a large number of names, depending on the region where it grows, including: guinea henweed, guiné in Brazil, anamu in the Dominican Republic, Puerto Rico and Brazil, apacin in Guatemala, mucura in Peru and guine in many other parts of Latin America, feuilles ave, herbe aux poules, petevere a odeur ail, in Trinidad, as mapurite and gully root, in Jamaica as guinea hen weed and many other names.
Petiveria alliacea, as mentioned, is a popular medicinal herb in the tropics, its pungent, garlic-like aroma (due to the presence of sulfur compounds) explains this popularity, at least in part.
All parts are excessively acidic; chewing a small portion of the leaves is said to make the tongue dry, black and rough as it appears in cases of malignant fever.
You use the whole plant or the leaves and roots separately.
Many biologically active compounds have been isolated from all parts of the plant, the most important of which are sulfur compounds, but flavonoids, triterpenes and steroids have also been identified.
Compounds containing sulfur are similar to the odorous compounds of garlic and onion, but in the latter they have alkyl rather than benzyl parts.
Merit analyzes on Petiveria alliacea have found the presence of a large number of biologically active chemicals including benzaldehyde, benzoic acid, benzyl 2-hydroxyethyl trisulfide, coumarin, isoarborinol, isoarborinol acetate, isoarborinol cinnamate, isothiocyanates, polyphenols, senfol, tannin.
The roots of the plant have also been shown to contain cysteine ​​sulfoxide derivatives that are analogous to, but different from, those found in plants such as garlic and onion. For example, P. alliacea contains sulfoxides of S-phenylmethyl-L-cysteine ​​(petiveriins A and B) [14] and S- (2-hydroxyethyl) -L-cysteines (6-hydroxyetines A and B). These compounds serve as precursors of different thiosulfates such as S- (2-hydroxyethyl) 2-hydroxyethane) thiosulfate, S- (2-hydroxyethyl) phenylmetantiosulfate, S-benzyl 2-hydroxyethane) thiosulfate and S-benzyl phenylmethantiosulfate (petivericin). All four of these thiosulfinates were found to exhibit antimicrobial activity.
Petiveriin also acts as a precursor to phenylmetantial S-oxide, a tear agent structurally similar to the sin-propanetial-S-oxide of the onion, but the formation of which requires a new cysteine ​​sulfoxide lyase and tear factor synthase enzymes other than those found in onion .
From the point of view of applications and uses, it has been shown that the water, methanol and ethanol extracts of the whole plant slow down the growth of leukemia cells and many other cancerous tumor cell strains in vitro.
It has also been shown that the water extracts of the whole plant stimulate the immune system.
Extracts of hexane and cyclohexane from leaves and stems increased the phagocytosis index of human granulocytes. One of the active immune-modulating compounds present in the extracts was dibenzyl-trisulfide.
A crude extract of the whole plant showed a protective effect on blood cells infected with the pathogenic bacterium Listeria monocytogenes.
The root extracts showed significant anti-inflammatory effects as well as a significant pain relieving effect.
Many reports and clinical studies confirm that aerial and root extracts have significant broad-spectrum antimicrobial properties in vitro and in vivo against numerous strains of bacteria, viruses, protozoa, fungi and yeasts.
Raw water extracts behave similarly to alcohol extracts.
The whole plant is a pungent herb that, according to folk medicine, is said to be abortive, antiseptic, antispasmodic, diuretic, and febrifuge. It is believed to calm the nerves, control diarrhea and stimulate the uterus.
The plant is used in the treatment of a number of conditions. It is taken internally to treat nerve spasms, paralysis, hysteria, asthma, whooping cough, pneumonia, bronchitis, hoarseness, fever, headache, flu, cystitis, STDs and menstrual disorders.
Taken externally, the plant is used to treat earache, fever and headache.
It is said that a steam bath or fumigation of the plant can restore movement to paralyzed limbs.
The roots are used as a remedy for toothache, and it has also been used to induce abortion.
The leaf macerates are applied to the belly to induce contractions in the event of a difficult birth.
The liquid from the leaves is instilled as nasal or eye drops to treat a violent headache, and as nasal drops to treat sinusitis.
In case of edema, take a bath or a steam bath with a decoction of the leaves.
A decoction of the leaves is applied to abscesses and is used as an analgesic against muscle pain and to treat skin diseases.
An infusion of crushed bark is drunk to treat colic, rheumatism, cancer, syphilis, colds, fever, bronchitis and asthma. Colombians chew the leaves to coat their teeth and prevent tooth decay.
Among other uses it is reported that the roots are placed between wool products to protect them from insects.
The leaves are used as an insecticide.
The foliar extract, and the dibenzyl-trisulfide isolated from the roots, have shown significant acaricidal activity against the Boophilus microplus tick when applied topically, and this activity is generally superior to commercial acaricides such as dimethoate, lindane and carbaryl.
Dibenzyl-trisulfide was also highly toxic to the adult sweet potato weevil (Cylas formicarius elegantulus) and to the adult coffee beetle (Hypothenemus hampei).
The leaf extract showed significant antifeedant activity in grasshopper Zonocerus variegatus, as well as an allelopathic activity on germinating seeds.
Petiveria alliacea is used, in general, as a repellent for bats and insects.

Preparation Method –
This plant uses the whole plant or the leaves and roots separately.
It is sometimes sold for medicinal use in local markets or even via the Internet in capsule form.
For medicinal uses, aqueous extracts are prepared from the whole plant, or from the roots or leaves, depending on the type of therapy to be undertaken.
Decoctions of leaves and infusions of the crushed bark are also prepared or, as happens with Colombians, the leaves are chewed to strengthen teeth and gums.