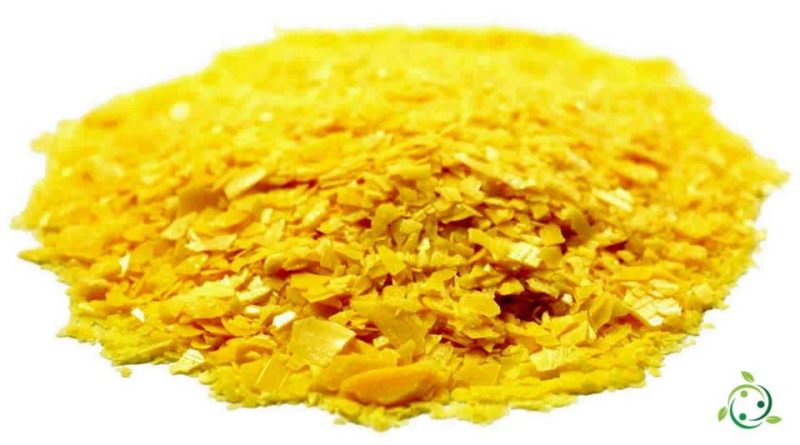 Carnauba wax is a wax obtained from the leaves of a palm (Copernicia prunifera Mill. H.E. Moore) which are collected during the dry season, when they are still closed and wrapped in a thin layer of wax.
The name derives from that of an indigenous population of the north-east region of Brazil, where this palm is particularly widespread.
However, this wax is present in other plants such as some Euphorbiacee, including Euphorbia bracteata Jacq.
The carnauba wax which is obtained by exudation from the leaves of Copernicia cerifera.
This wax comes in the form of small pale yellow flakes and is sought after for its characteristics of resistance and brilliance.
It is added to other qualities of waxes to increase the melting point, hardness and clarity.
In the wooden restoration it is used in recipes for the creation of mixtures for use in grouting and for the waxing or varnishing of furniture.

Features –
The melting point fluctuates between 82 and 87 ° C. It is hot soluble in common solvents (ethyl alcohol, turpentine, benzene, trichlorethylene).
Carnauba wax mainly contains esters of fatty acids (80-85%), fatty alcohols (10-15%), acids (3-6%) and hydrocarbons (1-3%).
The carnauba wax obtained by hand is called “wax of origin” and classified into three types: yellow, sandy and oily. The “sandy” one, of an ashy green color, contains on average 6% of water; the “greasy” wax is black with a green hue and differs from the “sandy” one in that it does not contain water in its composition. In industrial production, a better quality wax is obtained, called industrial wax and is classified into three types, respectively in order of purity, 1, 3 and 4.

Usage –
Carnauba wax is used for various uses but mainly in the preparation of car waxes, shoe polishes and floor polishes or for polishing furniture, often mixed with beeswax.
It is frequently mixed with beeswax and dyes for the creation of models to be used in the field of investment casting and artistic casting.
It is also used as a release agent in the production of fiberglass products.
It is also used in the food sector, in particular in some types of particularly shiny candies, in licorice and in some types of chocolates. Among the food additives it is classified with the abbreviation is E903. It also has an antioxidant function.
Carnauba wax is also used in the cosmetic industry where it is used as an ingredient in creams and lipsticks, while in the pharmaceutical industry it is used in the coating of tablets and capsules.
Moreover, due to its high thermal resistance, it is the wax used for polishing pipes with a wooden stove.