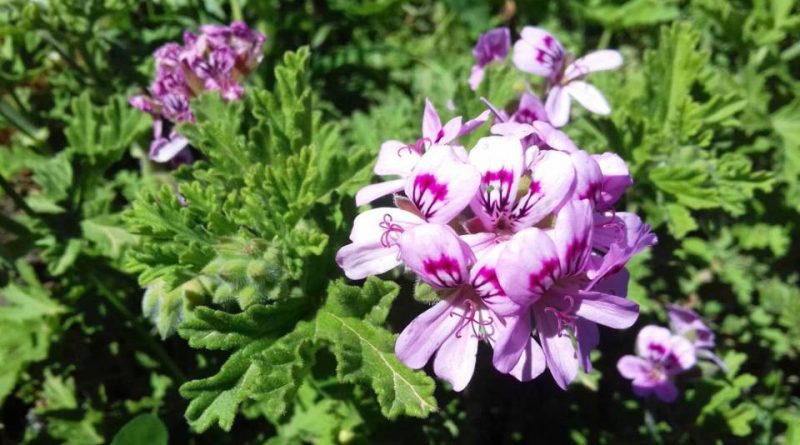 The Rose Geranium (Pelargonium graveolens, L’Hér., 1789) is a suffruticosa species belonging to the Geraniacee family.

Etymology –
The term Pelargonium comes from the Greek πελαργός pelargós stork: due to the shape of the fruits that resemble a crane’s beak.
The specific epithet graveolens comes from grávis heavy, annoying and from óleo exhale odor: which gives off an intense or unpleasant odor, due to the odor of the leaves.

Geographic Distribution and Habitat –
The Rose Geranium is a plant native to the provinces of the Cape and the northern provinces of South Africa, Zimbabwe and Mozambique.
Its natural habitat is that of mountain areas, in sheltered positions such as gorges and ravines, usually in relatively humid areas. 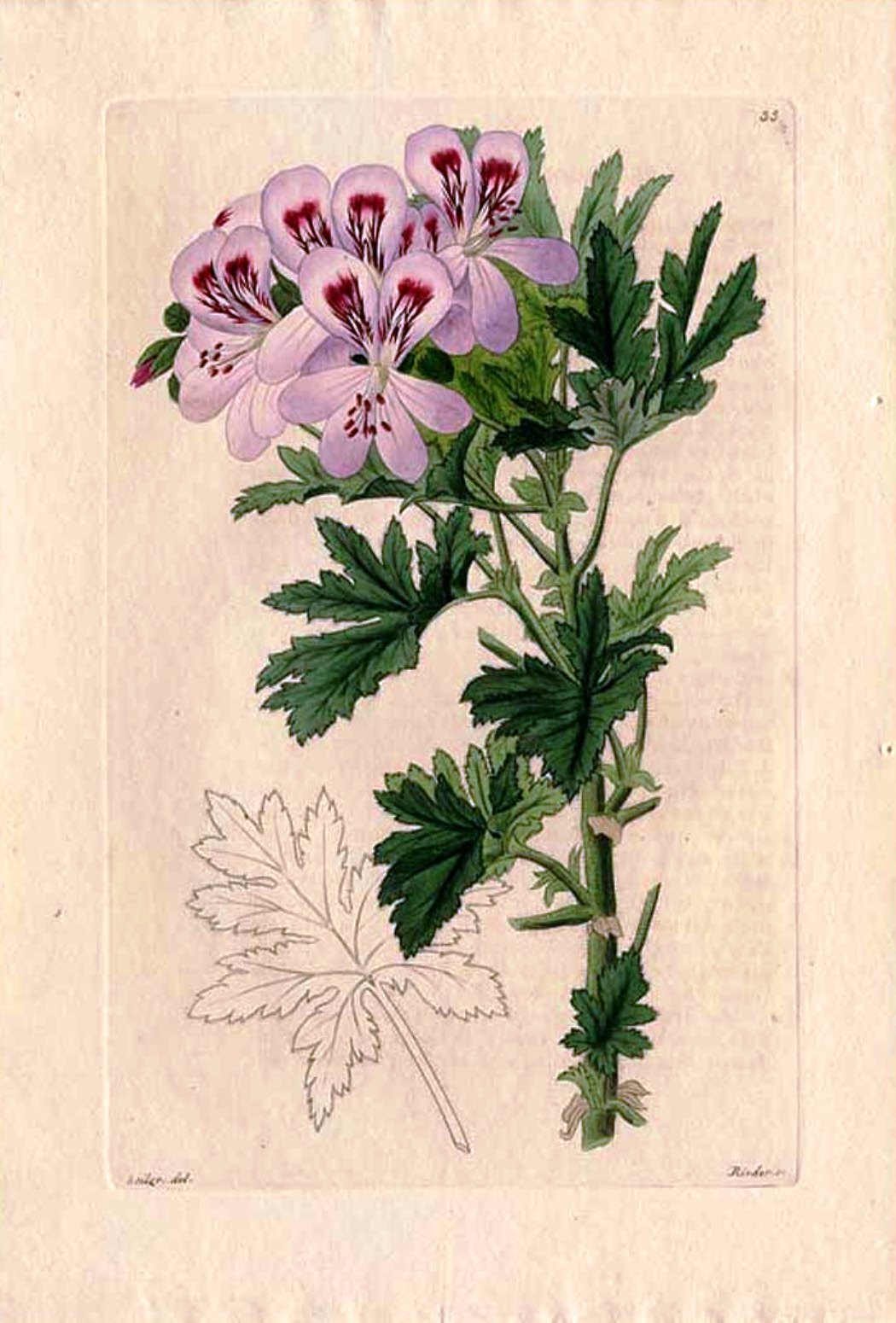 Description –
Pelargonium graveolens is an erect shrub, woody at the base, multi-branched, which grows up to 1.5 meters and has a width of 1 meter.
The leaves are deeply engraved, velvety and soft to the touch, due to the presence of glandular hairs. The leaves can have an intense pink color although the shape and scent of the leaves varies. Some plants are very fragrant and others have little or no scent.
The flowers range from pale pink to almost white and the plant blooms from August to January.
The schizocarpic fruit is a polachenarian.

Cultivation –
Pelargonium graveolens is a plant that, in addition to its natural state, is present in numerous cultivated and hybridized specimens (probably a cross between P. graveolens, P. capitatum and / or P. radens). There are many cultivars and they have a wide variety of scents, including rose, citrus, mint and cinnamon as well as various fruits.
The plant as well as growing in its natural state, in its habitats, is cultivated as an ornamental and also for its essential oil in the warm temperate to tropical regions of the world.
It is a plant that requires light, well-drained neutral to alkaline soil in a sunny location.
These are very tolerant plants to pruning, the plants can be cut down to the base to encourage the growth of new shoots.
Propagation can take place by seed which is recommended to be sown as soon as it is ripe in a greenhouse. The stored seeds should be sown in early spring in a greenhouse. The seed germinates best with a minimum temperature of 13 ° C, germination usually occurs within 2 weeks although, in colder climatic conditions, it sometimes takes a few months.
After germination it is necessary to place the new seedlings in individual pots when they are large enough to handle and grow them in the greenhouse for at least their first winter. Outdoors they should be transplanted in early summer, giving colder areas extra protection during the winter.
Cuttings succeed almost any time in the growing season, but early summer is the best time for the new plant to stabilize before winter.

Customs and Traditions –
Pelargonium graveolens is a plant that, in addition to its ornamental purpose, is of great importance in the perfume industry. It is grown on a large scale and its foliage is distilled for its scent. Pelargonium distillates and absolutes, commonly known as “geranium oil”, are sold for aromatherapy and massage therapy applications. They are also sometimes used to supplement or adulterate more expensive rose oils. As a flavoring, the flowers and leaves are used in cakes, jams, jellies, ice creams, sorbets, salads, sugars and teas. It is also used as a flavoring in some pipe tobaccos.
The green leaves of P. graveolens are strongly odorous precisely because they are covered with glandular hairs that contain very fragrant essential oils. For this the leaves are used in perfumery and also in the production of mosquito repellents.
Pelargonium graveolens is traditionally grown in southern Italy, where it is known as the hollyhock. Today the main crops for production purposes are in Egypt and on the island of Reunion, where an essential oil marketed under the name of Bourbon is extracted.
Pelargonium graveolens is used in both food and medicine.
In the food sector, flowers are added as they are to salads.
The leaves have a rose scent and are used as a flavoring in sweets, jellies, vinegars, etc.
The fresh leaves are brewed into a tea.
There are also many traditional recipes for sweets, preserves and infusions based on the leaves of Pelargonium graveolens and its varieties.
In the medicinal field it is used as an aromatic herb with a rose scent; the whole plant has relaxing, antidepressant and antiseptic effects, reduces inflammation and controls bleeding.
All parts of the plant are astringent.
It is used internally in the treatment of premenstrual and menopause problems, nausea, tonsillitis and poor circulation.
Externally, the plant is used to treat acne, hemorrhoids, eczema, bruises, ringworm and lice.
The essential oil of the leaves is used in aromatherapy and is also applied topically for cervical cancer.
An essential oil is obtained from the plant, with a scent of orange-pink.
This plant is the main constituent of geranium oil, widely used in aromatherapy, skin care and as a food flavoring.
The oil is also used as a substitute for the expensive rose attar in the perfume trade.
Analyzes carried out in some laboratories by Australian plants have identified the presence of over 50 organic compounds in the essential oil of Pelargonium graveolens.
Analyzes of Indian geranium oils indicated a similar phytochemical profile and showed that the main constituents (in terms of composition%) were citronellol + nerol and geraniol.

Preparation Method –
Pelargonium graveolens is a plant that is used both in the ornamental field but, above all for industrial purposes, in the food and medicinal fields.
The leaves can be used fresh at any time of the year.
Flowers are added to flavor and dress salads.
The leaves are used as a flavoring in sweets, jellies, vinegars, etc.
A tea is made from the fresh leaves.
With the leaves are prepared preserves and infusions that become part of many recipes.
The leaves are used in potpourri.
In the medicinal field, the whole plant is used as an aromatic herb.