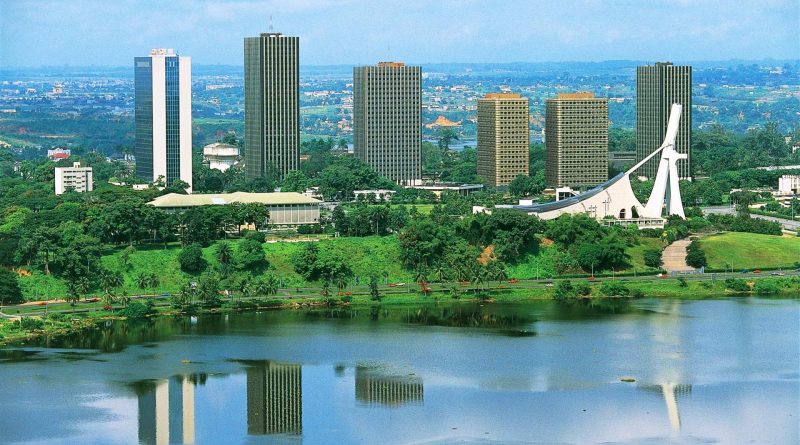 Geographical map of the Ivory Coast

Ivory Coast is a West African state and is a semi-presidential republic with a total population of 19,737,800 (as of 2012).
The capital is Yamoussoukro with (200,659 inhabitants (as of 2005) but its economic and government capital, as well as the largest and most populated city, is Abidjan, with a population of 4,707,000 inhabitants (as of 2014).
The Ivory Coast borders Liberia and Guinea to the west, Mali and Burkina Faso to the north, Ghana to the east and the Gulf of Guinea to the south.

Geography –
The Ivory Coast is a country with a west coast that is characterized by the presence of rocks, bays and rocky promontories; the eastern one is crossed by large and deep lagoons, most of which are inaccessible to the sea due to the presence of small sandy archipelagos that form a natural barrier between the coastal area and the open sea.
The hinterland is characterized by dense rainforests, home and refuge of more than 200 plant species. Forests slope down rapidly to the north, giving way to thinner vegetation typical of savannas.
The only reliefs present are found in the western regions of Man and Odienné, among which the Nimba mountains, more than 1750 m high, stand out.
As for hydrography, the main rivers are the Bandama, the Sassandra and the Comoé, none of which can be navigated as they are interrupted in several places by rapids or subject to drought during the dry season. It was not until 1950 that the first canal was built, in the Ebrié lagoon, in Abidjan.

Climate –
The climate of the Ivory Coast is hot and humid, subequatorial on the southern coast, tropical in the center and arid in the northern part.
The subequatorial climate is characterized by constant temperatures (between 25 and 30 ° C), high humidity (80-90%) and abundant rainfall (1766 mm in Abidjan, 2129 mm in Tabou). There are two dry and two wet seasons. The main dry season, hot, interspersed with some rain, runs from December to April. The shortest dry season is from August to September. The rainy seasons, on the other hand, range from May to June (the longest one) and from October to November (the shortest one).
The tropical climate of the humid savannah covers the north of the forest zone and the south of the savannah region. Temperatures range from 14 to 33 ° C with humidity between 60 and 70% and consistent rainfall (1200 mm in Bouaké). There are four seasons: two dry, from November to March and from July to August, and two rainy, from September to October and from March to June.
The climate of the savannah has more significant daily and annual temperature variations in the order of 20 ° C and a humidity rate ranging from 40 to 50%. The area is characterized by the intermittent presence, between December and February, of a cold and dry wind, the harmattan. There are two seasons: a dry one from November to June, with some sporadic rain in April, and a rainy one, from July to October. 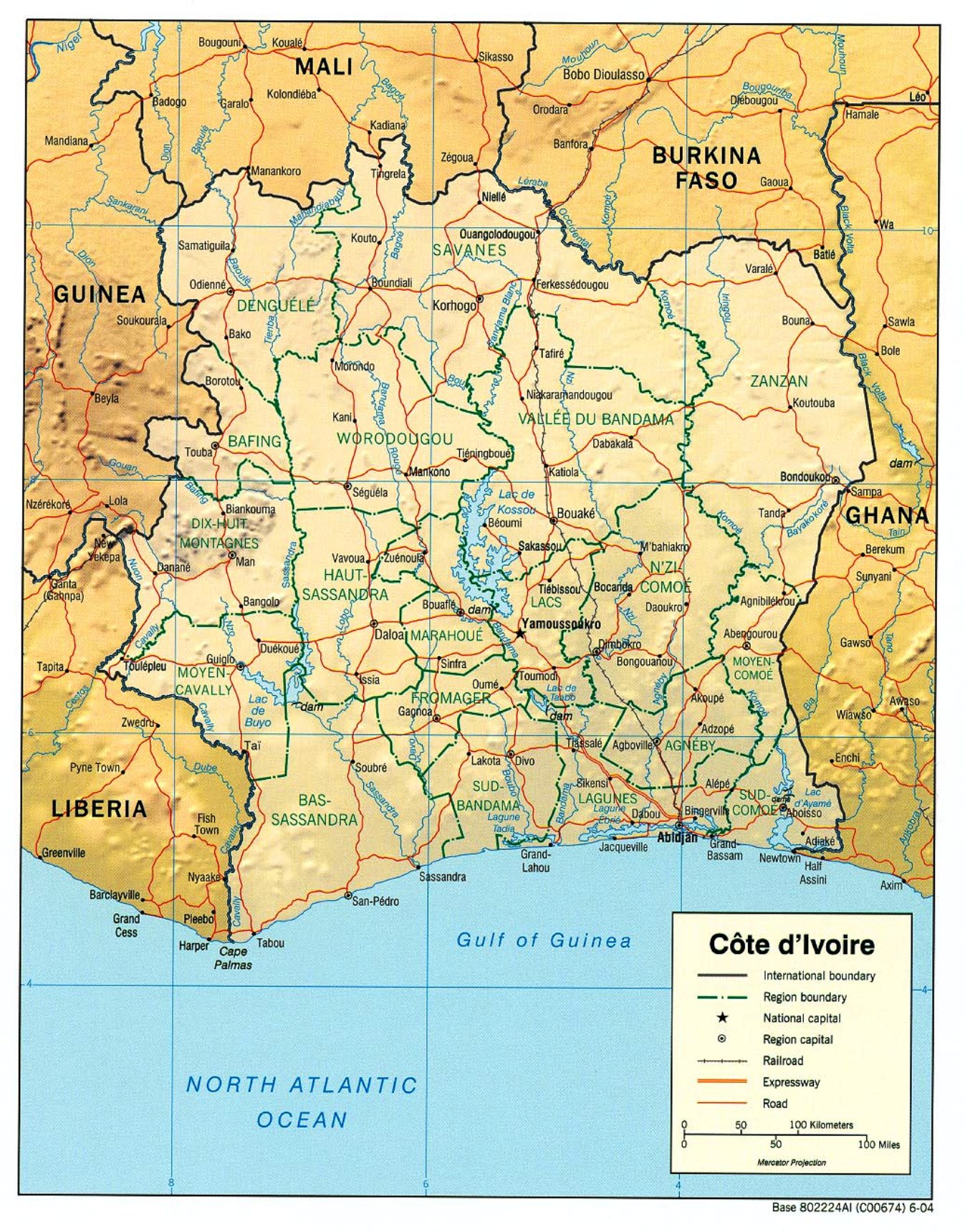 Flora –
In the Ivory Coast, a national park of scientific interest has been established that extends over an area of ​​3,500 km² in the south-western region of the country, on the border with Liberia. It represents the last intact portion of the great expanse of trees and where the Tai forest thrives.
It is a vegetation that is predominantly a dense evergreen shadowy forest with emerging trees up to 60m high, with massive trunks and large buttresses or supporting roots. This mature tropical forest includes about 1,300 species of higher plants and has been designated as a World Heritage Site and a Biosphere Reserve by UNESCO. Another protected area is the Comoé National Park, near the border with Burkina Faso. This has a variety of habitats, including gallery forests, woodlands, open savannas, and wetlands.
In 2016, 3660 species of vascular plants were registered in the Ivory Coast. The Ébrié lagoon is dominated by mangroves and herbaceous vegetation, including both rooted and floating aquatic plants. Inland there are vast swamps with larger herbaceous plants and small trees.

Fauna –
The Ivory Coast has an indigenous fauna that includes, in general, buffaloes, chimpanzees and other primates, antelopes and gazelles of various kinds, including some of the typical species of the African tropical forest such as the bongo and the various “duikers”. the rare cephalophus zebra, and various species of reptiles including poisonous snakes. Elephants, on the other hand, are almost extinct.
In 2016, around 252 mammal species, 666 bird species, 153 reptile species, 80 amphibian species and 671 fish species were recorded in Côte d’Ivoire.
In the shallow parts of the Ébrié Lagoon there are a number of invertebrates including polychaete worms, nemertei worms, oligochetes, isopods, amphipods and shrimps. Over a hundred species of fish have been recorded here, and the surrounding lagoon and marshes are home to the pygmy hippo, Nile crocodile, West African thin-nosed crocodile, dwarf crocodile and African manatee.
Population growth and civil wars, along with deforestation, increased plantation area, bushmeat hunting and other factors have led to a reduction in animal diversity in Côte d’Ivoire, so much so that many are now limited to protected areas. Among the 135 mammal species recorded in the Comoé National Park there are 11 species of primates including the olive baboon, the green monkey, the lesser spotted-nosed monkey, the Mona monkey, the black and white colobus, the olive colobus, the white-collar mangabey and the western chimpanzee. A total of 17 carnivore species have been observed here, but cheetahs, wild dogs and lions appear to be no longer present. There are also 21 species of artiodactyls present including hippo, bushpig, bongo, warthog, buffalo, kob, red-flanked duiker, bushbuck, waterbuck, roan antelope and oribi. Mammals recorded in the Taï National Park include the pygmy hippo and 11 species of monkeys, as well as African forest elephants, buffaloes, pangolins, antelopes, leopards, chimpanzees, and zebras. Reptiles include crocodiles, lizards and chameleons, as well as snakes such as horned vipers, mambas and pythons.
Among the 670 bird species that have been recorded in the country are 10 seabird species and 119 waterfowl species, while the remaining birds are terrestrial. There are no endemic species to the country, but it is visited by 197 species of migratory birds. Some noteworthy birds include 6 species of vulture, raptors, owls, 8 species of storks, African jacana, ibis, herons, plovers, parrots, 11 species of hornbill, pigeons, and many small passerines.