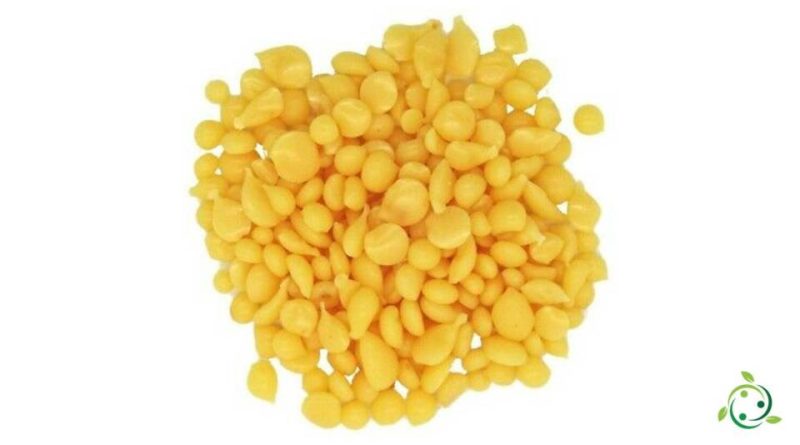 Candelilla wax is a particular type of wax of natural origin but not created by bees.
Candelilla wax derives in fact from some plants, such as: Euphorbia antisyphilitica Zucc. and Euphorbia bracteata Jacq., plants native to Central America (especially north-eastern Mexico and south-eastern United States) and which are also cultivated for this purpose.
Candelilla wax is present right inside these plants, especially inside the leaves and stems.
Candelilla wax is extracted from these plants through a complex extraction process.
The result is a product with a characteristic smell and an undefined color that incorporates many shades of yellow and brown.
It has a very high melting point (around 74 ° C). It is insoluble in water as it dissolves in common organic solvents, such as acetone, benzene and chloroform.

Uses –
Candelilla wax is widely used in cosmetics for the preparation of lip products, but also as an ingredient in hair preparations, to which it gives shine.
This wax is used in all EU member states and in many other countries around the world, such as the United States, Russia, Brazil, Canada and South Africa.
In the list of ingredients it is indicated with the following name: “Cera candelilla, sin. Euphorbia cerifera (Candelilla) Wax ”.
This wax has properties:
– Emollient – softens and smoothes the skin;
– film-forming agent – creates a continuous film on skin, nails and hair.
Due to its properties it also creates a barrier on the skin, retaining moisture, with an emollient effect, precious in balms for hands and chapped lips.
It is generally worked with beeswax; it is thus transformed above all into lip balm and other types of cosmetic sticks. The use in this kind of products makes the lipstick or lip balm rigid at the right point, shiny and above all waterproof.
Furthermore, candelilla wax is also used in other areas of industrial production. This natural extract, for example, is often used to make paints.
Finally, remember that it is also very popular in the food sector where it often becomes one of the indispensable ingredients for the preparation of chewing gum and candies.
In fact, food industries usually indicate it with the initials of E 902.

Toxicity –
Candelilla wax is a natural product that does not pose a threat to human health and is totally non-toxic.
In clinical studies, it was found that products containing beeswax or vegetable wax, in general, are practically non-irritating and no photo-toxicity or sensitizing effect on the skin was observed.