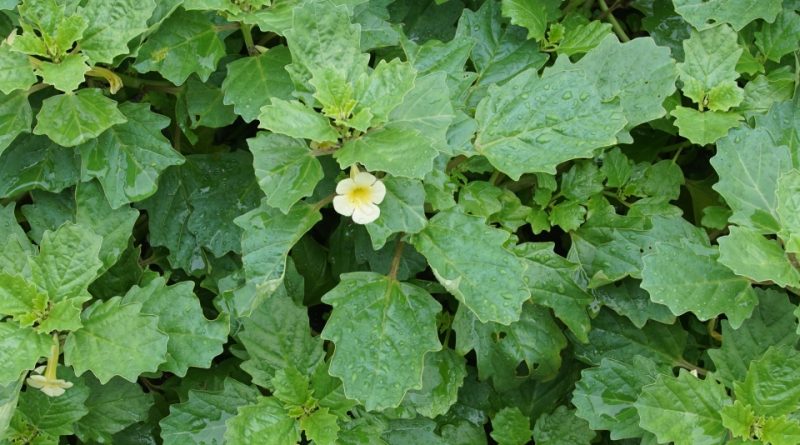 Pedalium (Pedalium murex L.) is a herbaceous species belonging to the Pedaliaceae family.

Etymology –
The term Pedalium derives from the Greek word Πηδάλιον, pedalion, which means “rudder of a ship”.
The specific epithet murex comes from murex, a shell with a thorny shell wrapped in a spiral: for thorny and spiral fruits.

Geographic Distribution and Habitat –
Pedalium murex is a herbaceous plant found in some areas of tropical Africa, from Ghana to Somalia, south of East Africa to Tanzania, Mozambique and present in East Asia, from India to Indonesia.
Its habitat is that of coastal areas on open sandy and degraded sites, in sandy places near the sea, mainly in the arid regions of Sri Lanka, where it is common between 0 and 230 m. s.l.m .. 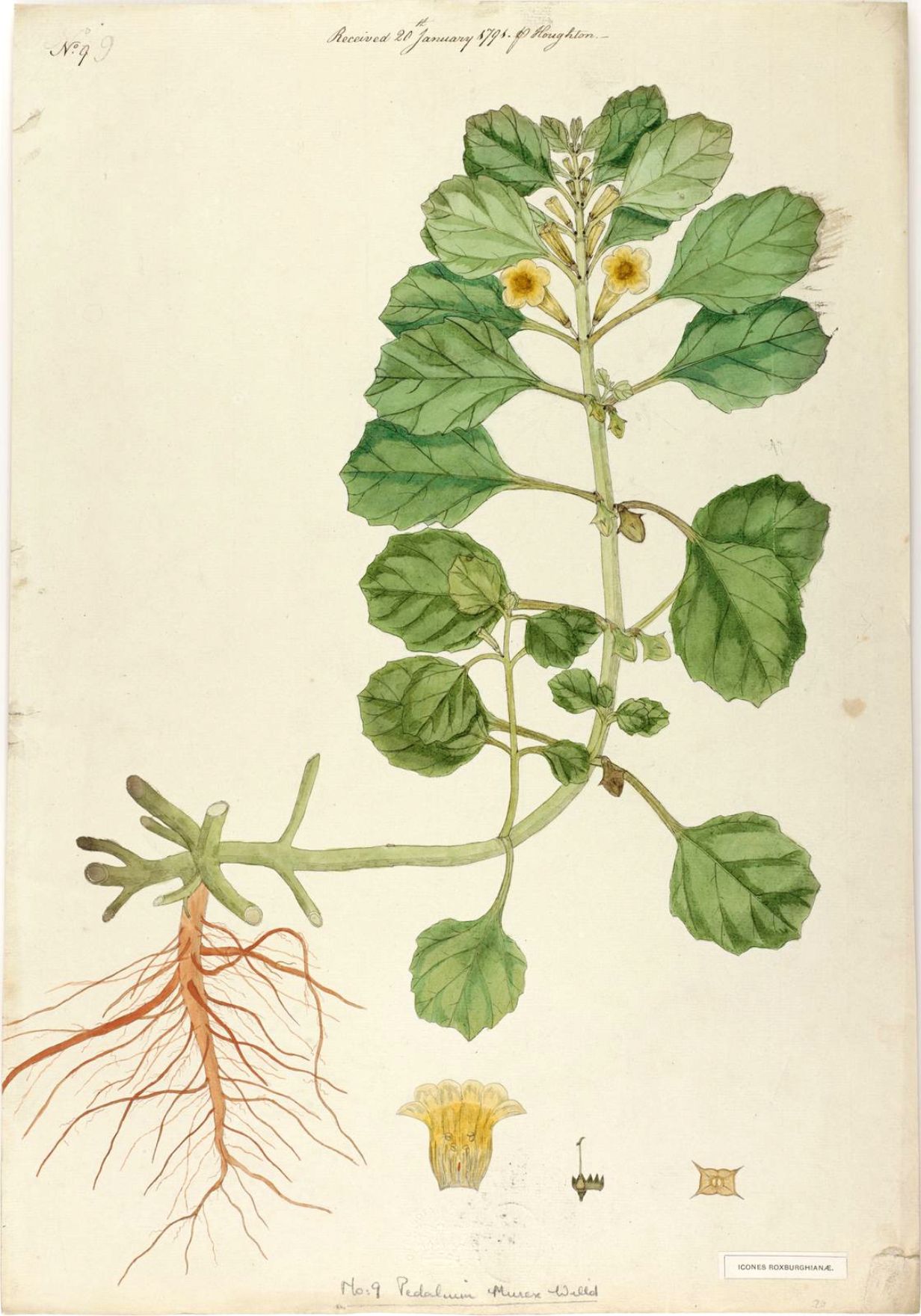 Description –
Pedalium murex is a herbaceous plant with erect to ascending stems 10–75 cm long, slightly succulent and highly branched.
The leaves are characterized by oblong to elliptical leaf lamellae, 1.5-5 x 0.8-3.5 cm, rounded or truncated at the apex; petiole 0.5–3.5 cm long.
The flowers are formed by a cream-yellow to white corolla, usually with an internal purple spot, with a tube 2-2.5 cm long and 1.5-2 cm in diameter.
The fruits are thorny and 1-2 cm long.
Pedalium murex is a plant with morphology and physiology linked to the areas where it grows.
In Somalia it is perennial, caudex and relatively small (10-20 cm tall) and erect, and the flowers usually have a purple spot. In contrast, the more or less herbaceous forms predominant in other countries, including the India type, are much larger annuals without a caudex, have prostrate shoots only ascending at the tip, and the flowers lack the purple spot in the throat. However, the fruits do not fundamentally differ, although the Somali fruits show a greater degree of variation in some minor traits. The perennial forms of Somalia may deserve taxonomic recognition, and it can be assumed that they represent the ancestor of the widespread annual weed. In this sense, further research is needed.

Cultivation –
Pedalium murex is an annual or perennial herb with a fetid odor.
The plant is harvested in nature for its edible leaves and medicinal uses. The hard, thorny fruits are sold as medicines on Indian markets.
The thorny fruits are the cause of many injuries to the feet of local populations and animals.
The plant can be grown on predominantly sandy soils and propagates by seed.

Customs and Traditions –
Pedalium murex is a plant that grows spontaneously in various parts of the world where it takes different names; in India it takes the Hindi name “Gokhru or gokhar” and in Sanskrit as “gaja-daunstraka, gokshura or tittagokshura”. Its names vary from region to region ranging from north to south and east to west of the country. It is also called in the Kannada language: doddanaggilu, in Malayalam: motha-malvi-gokharu, in Tamil: Ananerinnil, in Marathi: Gokhara, in Gujarati: Gokhura, in Oriya: Yanai nerunjil, in Arabic: Khasake kabir, in Burmese: Sulegi, in Singapore: Ati neranchi and in Persian: Khasake Kalan.
The plant is used for food as the leaves are consumed cooked as a vegetable.
Moreover, this plant is used in the traditional medicine of the territories where it grows.
From the various parts of the plant an infusion or an extract is obtained while the plant in cold water is used as an emollient, diuretic and also to be better used in the treatment of urinary problems such as gonorrhea, dysuria, urinary incontinence or retention.
The plant is also used by local populations for analgesic and antipyretic activities.
It is also interesting to note how this plant is traditionally reported to possess excellent healing activities in patients with reproductive disorders which are mainly impotence in men, nocturnal emissions, gonorrhea and leucorrhea in women.
From a phytochemical point of view, Pedalium murex is known for the presence of a considerable amount of diosgenin and vanillin which are considered an important source and useful starting materials for the synthesis of steroid contraceptive drugs and isatin alkaloids. Other phytochemicals present in the plant are: quercetin, ursolic acid, caffeic acid, amino acids (glycine, histidine, tyrosine, threonine, aspartic acid and glutamic acid) and various classes of fatty acids (triacontanoic acid, nonacosane, tritriacontane, tetratriacontanyl and eptatriacontanyl) 4-one).
Furthermore, the fruits of this plant are rich in flavonoids, sapogenin (diosgenin-0.06%) and soluble proteins (20.14 mg / g).
At the pharmacological level, in addition to its traditional ones, the plant has been studied for anti-ulcerogenic, nephroprotective, hypolipidemic, aphrodisiac, antioxidant, antimicrobial and insecticidal activity. From all these reports it can be concluded that the plant represents a potential natural source for the treatment of various types of acute or chronic diseases.
Other uses include some agroforestry uses, as the plant is an indicator of saline soils.

Preparation Method –
Both the leaves and the roots of the Pedalium murex are used. The water in which the leaves have been boiled, or a decoction of the root, is drunk to treat venereal diseases.
Although used in folk medicine, the leaves and roots have been used in a clinical trial with gonorrhea patients where they were found to have no effect.
The sticky mucilage produced by soaking the plant is used as an emollient, diuretic and tonic, to treat gonorrhea and dysuria, and to dissolve urethral stones.
The whole plant is considered emmenagogue and oxytocic and the root is considered antibiliary.