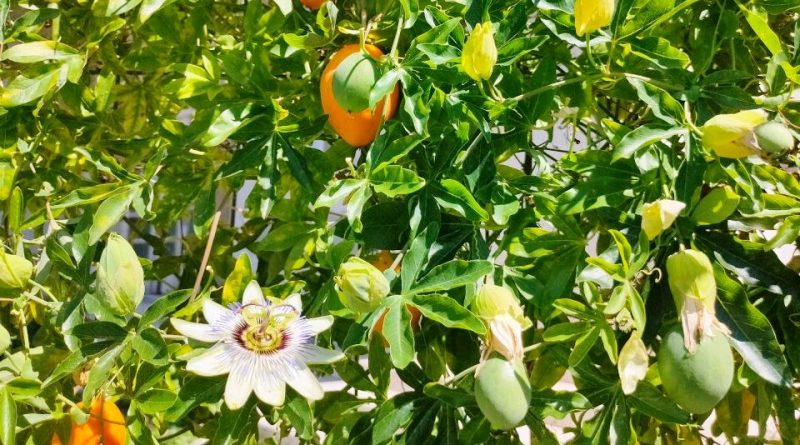 Etymology –
The term Passiflora comes from pássio passion and from flos, floris fiore: flower of the Passion, due to its appearance that recalls the symbols of the Passion of Christ.
The specific epithet embodied comes from incárno embody, take on an embodied color, due to the color of ripe fruit.

Geographic Distribution and Habitat –
Passiflora incarnata is a plant native to eastern and southern North America and present from Kansas to New Jersey, from south to Texas and Florida.
Its habitat is that of fields, roadsides, rows of fences and open woods, savannahs, prairies, dunes, cultivated land and disturbed areas, in clayey, clayey or sandy soils, from dry to mesic, and often poor; at altitudes up to 1,000 meters but usually below 400 meters. 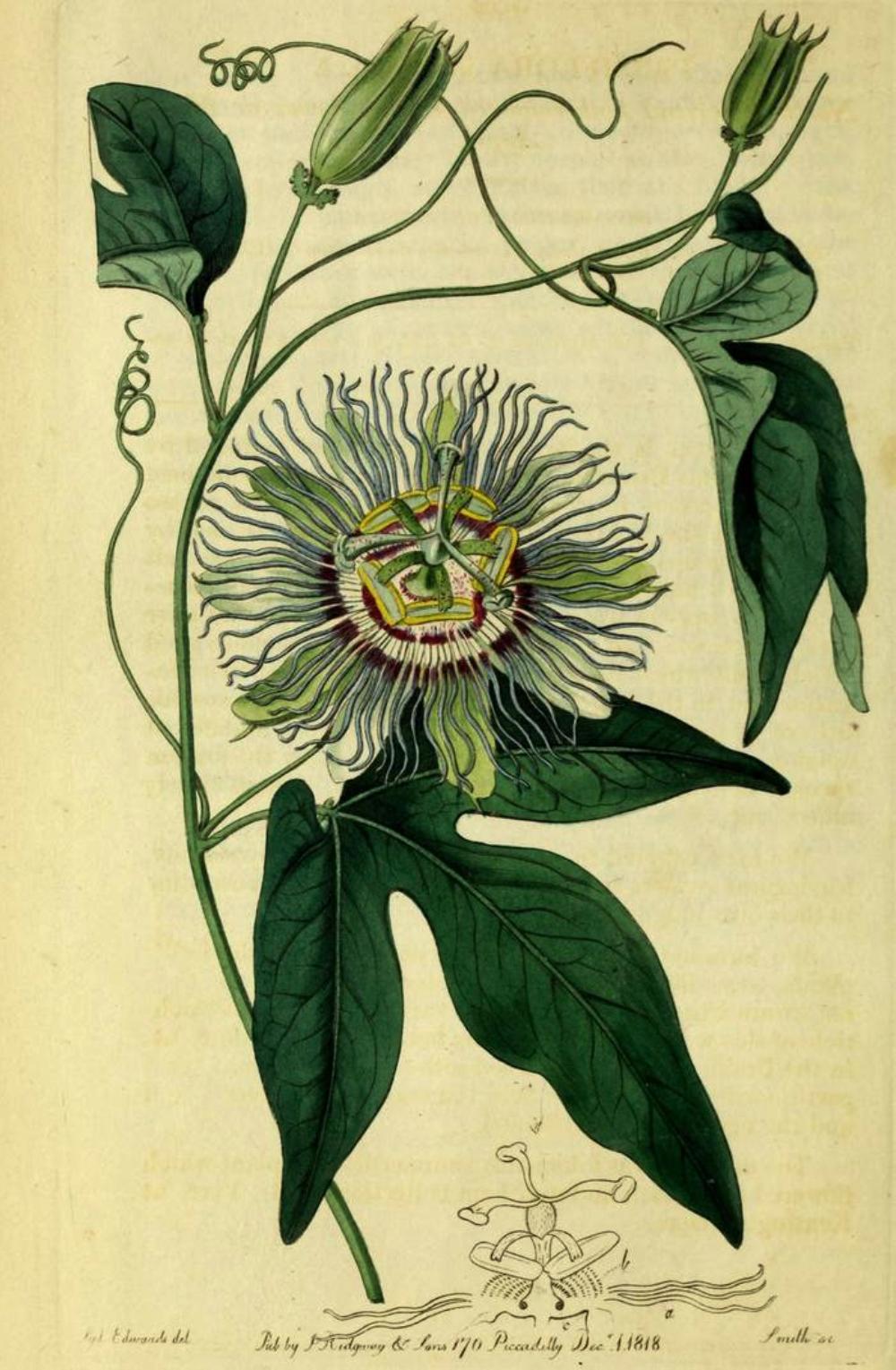 Description –
Passiflora incarnata is a herbaceous, climbing, evergreen plant with long, creeping stems with many tendrils.
The stems can be smooth or pubescent.
The leaves are alternate and palmate with 3 lobes and occasionally with 5 lobes; they measure 6-15 centimeters and have two characteristic glands at the base of the lamina on the petiole. The flowers have five bluish-white petals. They have a white and purple crown, a structure of thin appendages between the petals and stamens. The large flower is typically arranged in a ring above the petals and sepals.
The flowers are pollinated by pollinating insects and are self-sterile.
The anthesis begins in the period of July.
The fruit is fleshy and is an oval yellowish berry the size of a hen’s egg (up to 5 cm in diameter); at the beginning it is green, and then becomes yellow as it matures.
As with other passion flowers, it is the food of a number of moth larvae. In many cases, the fruit is highly valued by wildlife.
The green egg-shaped fruits “can pop” when stepped on (hence the English name).

Cultivation –
Passiflora incarnata is a plant that propagates naturally, both by gamic and agamic way, thanks to the ability to produce root suckers. The fleshy roots of this species, in addition to giving it an invasive character, allow it to overcome even the coldest winters. The aerial part dies annually and then reappears around May.
Passiflora incarnata is easy to grow in its native area where it is a common low maintenance garden plant that can be bred to adorn fences and pergolas.
In the wild it can become invasive in the southeastern United States, from the central ones to Illinois, Indiana and Ohio.
It is a plant that grows best in full sun and needs direct sunlight for at least half of the day. The best soils need to be well-drained but plants occasionally tolerate moist, acidic soils. Plants have a high drought tolerance.
P. incarnata can be planted all year round in the original areas and the space between two plants must be around 90 – 150 cm.
It takes one to two years before they start producing. Each flower has a very short life (about one day). The fruit develops in two to three months.
The yield depends on the size and age of the plant, but on average you can have 10-20 fruits per vine. The seeds can be harvested in the fall after the fruit has begun to wilt.
The plant can be subject to nematodes and caterpillars.
Remember, however, that Passiflora incarnata can potentially become a weed in cultivated areas.
In this case it is advisable to check mechanically by regularly removing the suckers to prevent the spread of the plant.
It is also recommended to keep the plant on racks and fences to limit propagation.

Customs and Traditions –
Passiflora incarnata is a plant that has long been used by Native Americans. The Cherokee of Tennessee called it ocoee; the Ocoee River and Valley are named after this plant, which is the wild flower of the state of Tennessee.
For thousands of years this plant has been a staple food and medicinal plant for the Cherokee, until today.
The plant is still harvested in nature for local use as a food and medicine and is used as an ingredient in various commercial cosmetic preparations. It was grown as a fruit crop in the past and is often grown as an ornamental plant.
For edible use the fruits are consumed, both raw and cooked in jellies, jams, etc.
They taste sweet but are better when used as a jelly.
They are high in niacin but contain relatively little edible pulp and many seeds.
Both raw and cooked leaves are also consumed. They are said to be delicious as a cooked vegetable or eaten in salads.
Flowers are also consumed both cooked as a vegetable or in syrup.
However, Passiflora incarnata is also used as a medicinal plant.
It is a valuable sedative and tranquilizer herb with a long history of use in North America.
It is frequently used in the treatment of insomnia, epilepsy, hysteria, etc.
The leaves and stems are antispasmodic, astringent, diaphoretic, hypnotic, narcotic, sedative, vasodilator and are also used in the treatment of female ailments.
The plant is used in the treatment of insomnia, nervous tension, irritability, neuralgia, irritable bowel syndrome, premenstrual tension and vaginal discharge.
An extract of the plant depresses the motor nerves of the spinal cord; it is also mildly sedative; slightly reduces blood pressure and increases respiratory rate.
The plant is not recommended for use during pregnancy.
Passiflora incarnata may have possible interactions with the following drugs:
– Sedatives;
– Anticoagulants;
– Monoamine oxidase inhibitors.
From a phytochemical point of view, the plant contains alkaloids and flavonoids which are an effective sedative that is not addictive and does not cause drowsiness.
The plant contains flavonoids and alkaloids, with the leaves containing the greatest concentration of flavonoids. Other flavonoids present in P. incarnata include chrysin, apigenin, luteolin, quercetin, kaempferol, and isovitexin.
Polyphenols belonging mainly to the C-glucoside class of flavones are present in P. incarnata and these phenols and flavonoids have high potential antioxidant properties that show a significant scavenger activity of free radicals.

Preparation Method –
Passiflora incarnata is harvested after some berries have ripened and then dried for later use.
The leaves, inflorescences and infructescences are used to make infusions and herbal teas; they have a similar effect to chamomile, thanks to the presence of the indole alkaloid passiflorine. Therefore, these teas (often associated with valerian and hops) are used to improve: anxiety states, nervous agitation, mild insomnia and gastrointestinal disorders of nervous origin.
A poultice is obtained from the roots which is applied to boils, cuts, earaches, inflammations, etc.
The dried plant is exported from America to Europe for medicinal use.
A homeopathic remedy is obtained from the plant.
An extract from the whole plant is used as an ingredient in commercial cosmetic preparations, as an astringent.
Both the extract of the flowers and the fruit are both used as ingredients in commercial cosmetic preparations such as balms and skin protectors.
The oil extracted from the seed is used as an ingredient in commercial cosmetic preparations as a skin protector.
A powder is obtained from the dried and ground seeds which is used as an ingredient in commercial cosmetic preparations as an abrasive and skin conditioner.
Passionflower is used as a natural flavoring agent in food production and is generally recognized as a safe substance (GRAS).
P. incarnata is also listed in the European Feed Additive Register.