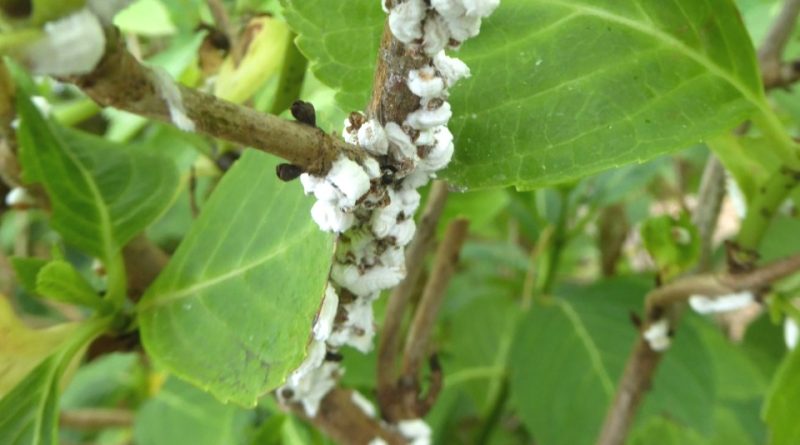 The Hydrangea Scale (Pulvinaria hydrangeae Steinweden, 1946) is a cochineal belonging to the Coccidae family.

Geographic Distribution and Habitat –
Pulvinaria Hydrangeae is an insect probably native to eastern Asia from where it spread to Europe in the 1960s.
This relatively polyphagous cochineal that prefers habitats where there are lime trees, hydrangeas, maples, ornamental rosaceae and others.

Morphology –
The Hydrangea Scale is a phytophagous insect in which the presence is made evident when the females, in the period between May and June, produce the showy white and elongated ovisacs that stand out on the green of the vegetation.
The Eupulvinaria hydrangeae, both at the nymph and adult stage, is not very mobile.
The various stages are made up of small ovoid, flat and not very evident plates.
Insects colonize the underside of the leaves, near the veins, and the shoots.
The adult females, when mature, produce a characteristic white ovisacco, elongated and longitudinally carinated; inside the ovisack, which is made up of waxy-silky material, there are several hundreds of eggs.
Eupulvinaria hydrangeae, in case of strong infestations, can cause both aesthetic (for ornamental plants) and direct damage, due to the trophic activity of the phytophages; furthermore, the asphyxiated effect caused by the colonies of insects on the vegetation, as a consequence of the deposition of the honeydew, produced by all stages of the phytophagus, should not be underestimated; the honeydew is in fact the cause of indirect damage such as burns and asphyxiation and vector of fumaggini.
In case of strong infestations, the plants can undergo defoliation and subsequent decay, which becomes a vector for the upper hand of other pathogens.

Attitude and Life Cycle –
The Hydrangea Scale overwinters at the stage of third age nymph, on the already lignified branches of arboreal plants such as the Linden tree or at the base of the plants, at the collar, or along the semi-permanent woody axes, of shrubby and bushy essences, as for the Hydrangea.
Arriving in spring, usually in April, which coincides with the beginning of the budding period of the plants, the wintering nymphs complete the cycle.
The females reach maturity in the period between May and June and thus begin to produce the ovisac and to lay eggs.
The new nymphs are born in the period of June and come out of the ovisack and scatter, walking, on the vegetation, colonizing the lower pages of the leaves throughout the summer.
As autumn approaches, which coincides with the fall of the leaves, the nymphs move to the twigs to overwinter.
The Eupulvinaria hydrangeae therefore completes only one generation per year.

Ecological Role –
Infestations by Eupulvinaria hydrangeae and subsequent control programs must be analyzed by evaluating all the possible factors that generated their dynamics: crop specializations, use of nitric fertilizers, exposures, humidity, etc.
If it is necessary to intervene against this cochineal, it should also be taken into account that it is biologically controlled by some ladybirds such as the comma ladybird (Exochomus quadripustulatus Linnaeus, 1758), therefore these biocoenoses must not be hindered by indiscriminate chemical interventions.
The intervention with chemical principles are therefore subject to general considerations that depend on the type of plant, the context in which it is inserted (park, garden, public and private urban green, size of the tree) and technical evaluations that are based on the real danger threshold of the pest.
In any case, given the previous considerations, the best time to perform chemical interventions is that of the release of the nymphs, approximately in June, when they are still not very protected; the intervention on the Lime tree could instead coincide with the flowering and therefore, in order not to interfere with the pollinators, it is advisable to anticipate or postpone it.
Another optimal moment for the intervention is the phenological phase which corresponds to the fall of the leaves, when the nymphs are preparing to winter on the woody organs; at this time it is advisable to intervene with activated white oils, well spraying all the woody organs; the intervention, based on the infestation, can be repeated at the end of winter.