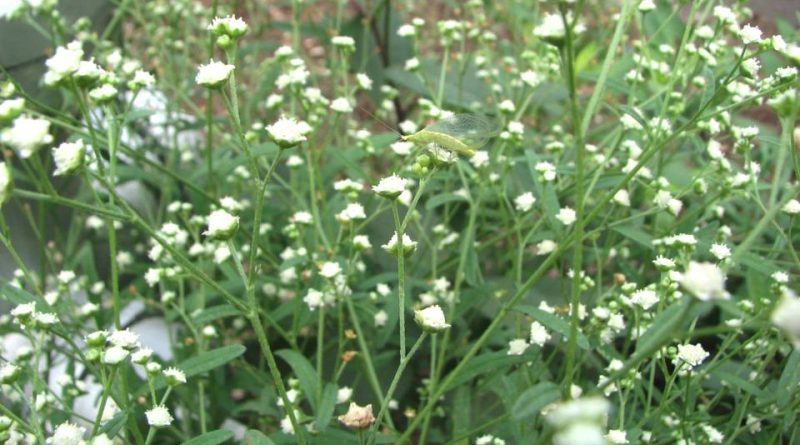 Parthenium weed or bitterweed (Parthenium hysterophorus L.) is a herbaceous species belonging to the Asteraceae family.

Etymology –
The term Parthenium comes from the Greek παρθένος virgin parthénos: reference to the particular fruiting also referred to by the specific epithet hysterophorus.
The specific epithet hysterophorus comes from the Greek ὑστέρα hystéra utero and from φορέω phoréo to carry, to have; De Theis writes: Vaillant, who instituted this genus, named it in this way as the envelope of the ovary depicts two lips separated by a cleft, which gives it the appearance of a vulva.

Geographic Distribution and Habitat –
Parthenium hysterophorus is a species of flowering plant in the aster family, Asteraceae. It is native to the American tropics.
In some environments it is an invasive species; it is present today in equatorial eastern Africa, Madagascar, India, some areas of China, eastern and northern Australia, in many oceanic islands with warm climates and in other areas of the world.
Its habitat is that of the warmer semi-arid, subtropical, tropical and temperate regions. It is found in riparian areas, along roadsides, along railways and in pastures, seasonal floodplains, grasslands, open woodlands, uncultivated areas, disturbed sites, meadows, gardens and crops. It is particularly aggressive in degraded or disturbed pastures in semi-arid environments. 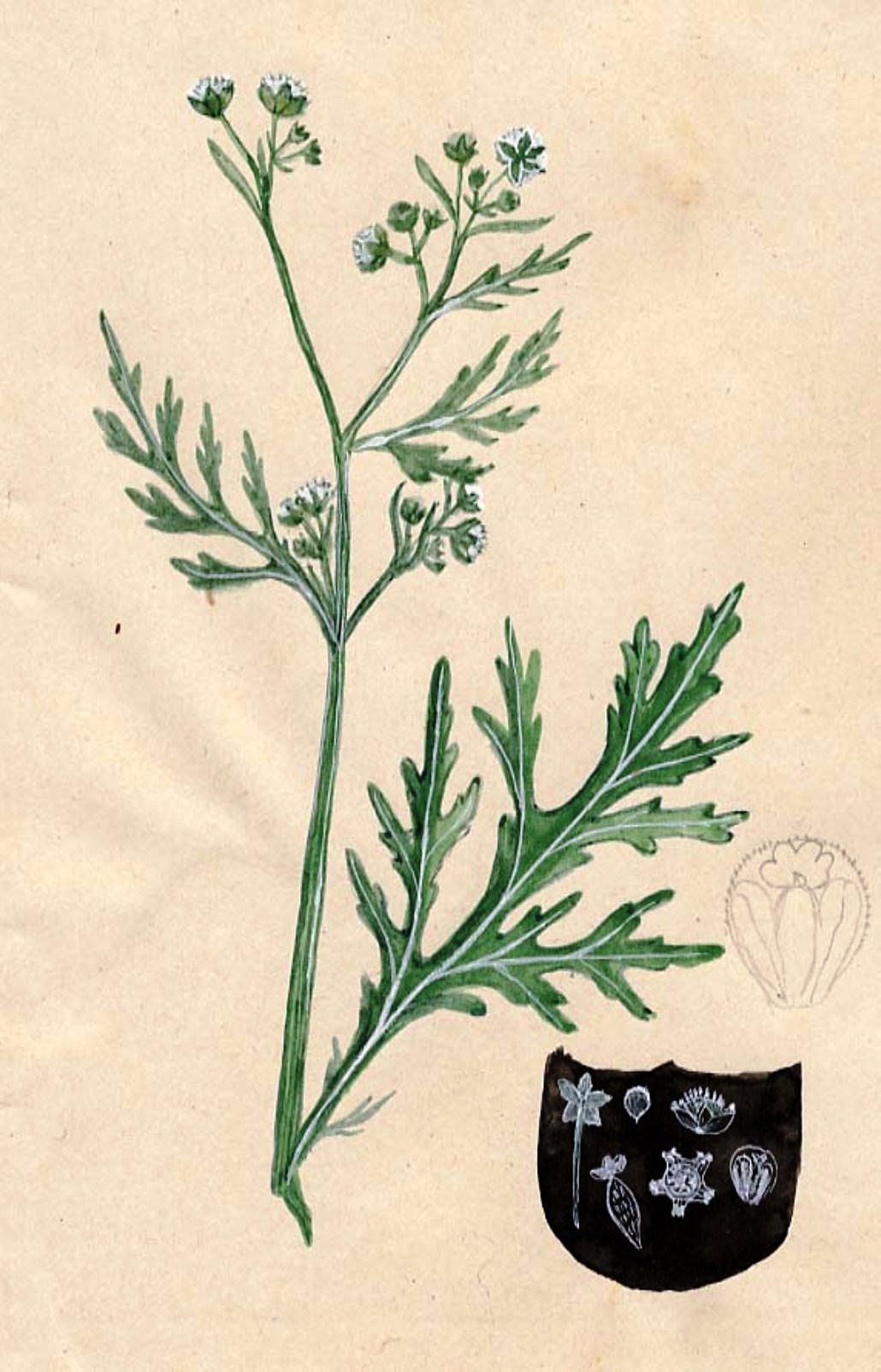 Description –
Parthenium hysterophorus is a highly branched annual herbaceous plant that usually reaches a height of 0.5-1.5m, but can occasionally reach 2m or more in height.
The plant has an upright habit and forms a basal rosette of leaves during the first phase of growth.
The mature stems are greenish and longitudinally grooved, covered with small stiff (shaggy) hairs that become very branched when ripe.
The leaves are arranged alternately and are simple with petioles up to 2 cm long and form a basal rosette during the early stages of growth. The lower leaves are relatively large (3-30cm long and 2-12cm wide) and are deeply divided. The leaves on the upper branches decrease in size and are also less divided than the lower leaves. The underside of the leaves and, to a lesser extent, their upper surface, are covered with short, stiff hairs that lie close to the surface (pubescent).
It has numerous flower heads arranged in clusters at the apex of the branches (in terminal panicles). Each flower head is supported by a 1-8 mm long stem. These flower heads (4-5 mm in diameter) are white or cream in color and have five tiny petals with a radius of 0.3-1 mm in length. They also have numerous (12-60) tiny tubular white flowers in the center and are surrounded by two rows of small green bracts. The color changes to light brown when the seeds are ripe and about to fall off. Flowering can occur at any time of the year, but is most common during the rainy seasons.
In each flower head, five small seeds (achenes) are usually produced which have a length of 1.5-2.5 mm and consist of a black seed surmounted by two or three small scales (a pappus) about 0.5-1 long mm, two straw-colored paper structures (actually dead tubular flowers), and a flat bract.

Cultivation –
Parthenium hysterophorus is a plant that spreads spontaneously in nature thanks to its large production of seeds ranging from 10,000 to 25,000 per plant.
These seeds are dispersed by wind, water, animals, vehicles, tools and machinery, and clothing. Sometimes they also spread in mud and contaminated agricultural products (e.g. forages and cereals).
This feature makes it a plant that in certain habitats can become invasive as happens in some parts of the world.
Light infestations of Parthenium hysterophorus in cultivated fields can be hoed or weeded by hand if manpower is available at acceptable costs.
Generally, the application of herbicides is expensive and often harmful; Paraquat sprays can be applied while the plants are young. Glyphosate is not effective against this species.
The most satisfactory and promising means of long-term practical control are biological. Different grass-feeding species are variously used or experimented with in various countries. The most established control organism to date is a Mexican native beetle, Zygogramma bicolorata, which was first introduced to India in 1984. It has since become widespread and well established in the subcontinent. Defoliates and often kills grass, and its damage to young flowering tops reduces seed production.
In various countries, such as Australia and South Africa, several other biocontrol agents have been released or are under evaluation. These include at least two other beetle species that have been released in South Africa, the weevil Listronotus setosipennis and the weevil Smicronyx lutulentus.
Even in South Africa, rust fungi have been of some use: winter rust Puccinia abrupta var. parteniicola plus summer rust Puccinia xanthii.
In Australia, in addition to the above, other biocontrol agents have been used or evaluated on Parthenium hysterophorus since 1980, for a total of 11 species. Of these eleven, nine appear to have settled in various regions. The two with the greatest effect appear to be the bicolor Zygogramma beetle and the Epiblema strenuana moth. However, other species that appear to have usefully established themselves include the mining moth, Bucculatrix parthenica; a weevil the Conotrachelus albocinereus and the moth Carmenta ithacae.

Customs and Traditions –
Parthenium hysterophorus is known by various names according to the places where it is widespread. These include: Parthenium weed, bitter weed, bitter-broom, bitterweed, carrot grass, congress grass, false camomile, false ragweed, feverfew, parthenium, parthenium weed, ragweed, ragweed parthenium, Santa Maria, Santa Maria feverfew, white top, whitehead, whitetop.
Parthenium hysterophorus is an invasive plant that infests uncultivated fields, roads, pastures and agricultural land, often causing disastrous crop losses.
In some areas there have been severe infestations affecting livestock and compromising agricultural production, with serious repercussions on human health.
It was first introduced as a contaminant in imported grain.
This plant produces allelopathic chemicals that suppress crop and pasture plants and allergens that affect humans and livestock.
Among the other allelopathic effects of the species, the presence of Parthenium pollen grains inhibits the setting of tomatoes, eggplant, beans and a number of other cultivated plants.
It also frequently causes pollen allergies. A study published in 2021 also showed that the plant could promote malaria by providing highly valued food and shelter for mosquitoes in East Africa.
However, there are also studies to use this plant as a means of removing heavy metals and dyes from the environment, control of aquatic weeds, commercial production of enzymes, additive in manure for the production of biogas, as a biopesticide and as a green fertilizer and compost.
Contact with the plant causes dermatitis and respiratory dysfunction in humans and dermatitis in cattle and domestic animals. The main responsible substance is parthenin, which is very toxic. It is also responsible for bitter milk disease in livestock when their forage is polluted with Parthenium leaves.
The species has been listed as an invasive alien species by Union Concern. This means that it is illegal to import or sell this species throughout the European Union.
However, Parthenium hysterophorus is also used in many medicinal treatments for skin inflammation, rheumatic pain, diarrhea, urinary tract infections, dysentery, malaria and neuralgia.
Parthenium hysterophorus decoction has been used in traditional medicine to treat fever, diarrhea, neurological disorders, urinary tract infections, dysentery, malaria and also used as an emmenagogue.
Parthenium hysterophorus was pharmacologically active as an analgesic in muscle rheumatism, as a therapeutic for neuralgia and as a vermifuge.

Preparation Method –
The entire green part of the plant is used from Parthenium hysterophorus and with this decoctions are prepared for therapeutic purposes in the traditional medicine of the areas where this plant originally grew.