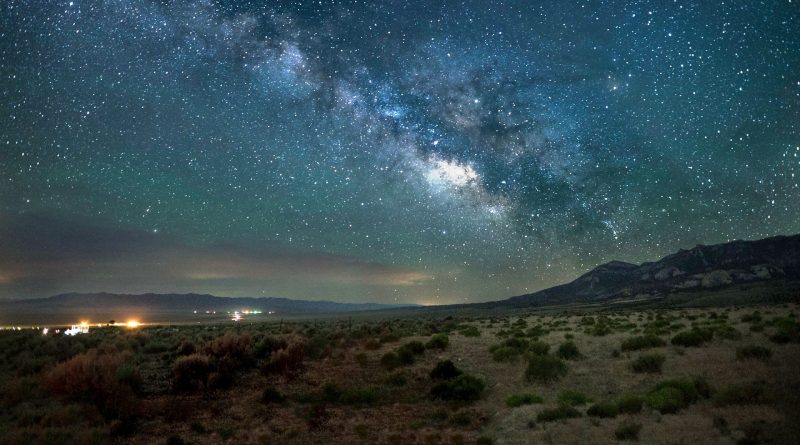 Great Basin National Park, whose WDPA Code is: 12165 is a United States National Park located in the State of Nevada.
This park has a land area of ​​312.30 km² and is managed by the National Park Service.
The park is named after the Great Basin, the dry, mountainous region between the Sierra Nevada and the Wasatch Mountains. Topographically, this area is known as the province of the basin and the chain. The park is located approximately 470 km north of Las Vegas.

Geography –
Great Basin National Park is located in White Pine County in eastern central Nevada near the Utah border and was established in 1986. The park is most commonly entered via Nevada State Route 488, which is connected to the US Route 6 and 50 from Nevada State Route 487 through the small town of Baker, the closest settlement.
The park is known for its groves of ancient bristlecone pines, the oldest known non-clonal organisms, and the Lehman Caves at the base of 3,982m Wheeler Peak, as well as the Wheeler Peak Glacier.
It was President Warren G. Harding who created the Lehman Caves National Monument with the presidential proclamation on January 24, 1922. The monument and its surroundings were designated a national park on October 27, 1986. There are a number of campsites within the park. . The Highland Ridge Wilderness is adjacent to the Great Basin National Park. These two protected areas provide contiguous natural habitat and protection of 590.0 km2 of lands in the eastern basin of Nevada.

Geology –
Within the Great Basin National Park many of the rocks were formed during the Cambrian, when the region was on the edge of a land mass called Laurentia. As the Paleozoic era progressed, several intensified geological events occurred, including repeated fault episodes and, in turn, orogenesis that resulted in the upward lifting of a metamorphic core, creating mafic and rhyolithic dams and sills.
Extensive volcanic activity occurred during the Middle and Late Cambrian, which further contributed to the uplift of the area. This also contributed to a second cycle of block faults, in which conglomerates, ash streams and tuffs accumulated in the snake chain.
Continuous and intermittent fault movements also occurred, with individual fault surfaces on both sides of the Snake Range thinning and lengthening.
Glaciation, mainly during a series of ice ages in the Pleistocene, then helped to erode the peaks of the Serpent Range, leaving canyon walls, U-shaped valleys, cirques and moraines throughout the range.
The Lehman cave system began to form around 550 million years ago (during the Cambrian), while still submerged in a relatively warm and shallow ocean. The caves are made up of a solution of marble and limestone, for the most part, which forms the many cave decorations throughout the caves.
The cave system got much deeper during the Pleistocene when a prolonged and increased water flow eroded the fractured rock of the cave. Eventually, the water level dropped, leaving dazzling rooms and cavities in the rock, creating the depths of the Lehman Caves system. 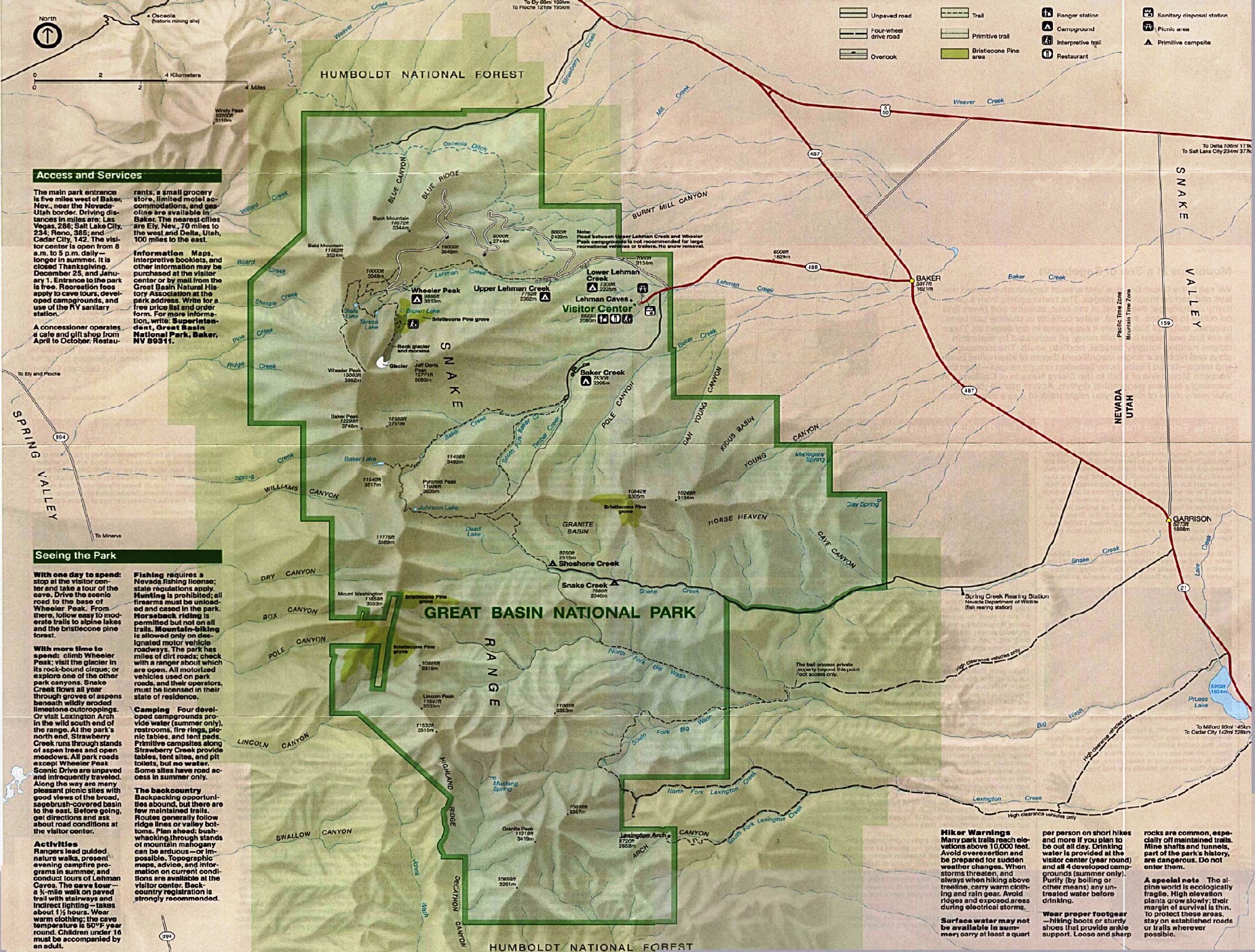 Climate –
According to the Köppen climate classification system, Great Basin National Park has a humid continental climate during hot summer (Dfb). The vegetation zone at the Lehman Caves visitor center is 6b with an average annual extreme minimum temperature of -19.9 ° C.
The park is located in an arid region and receives very little rainfall during most of the year. Most of the precipitation is winter snow or summer thunderstorms. All the precipitations in this region evaporate, sink into the subsoil or flow into the lakes, that is, they are endorheic. No water reaches the ocean.
Winters are cool and summers mild to warm. The weather can change rapidly, especially inland or on Wheeler Peak at high altitudes. The Lehman Caves maintain a fairly constant temperature of 10 ° C, with a humidity of 90% all year round. The climate varies throughout the park, depending on the altitude and location. The higher elevations are cooler and receive more rainfall, while the lower elevations are warmer and drier.

Flora –
Within the Great Basin National Park and the nearby valleys, we find eleven species of conifers and over 800 species of plants.
The area around the Visitor Center is dominated by plants such as mugwort, glasswort, single-leaf pinyon, and Utah juniper. The higher elevations are home to mountain meadows, silver fir, aspen, Englemann spruce, and large Ponderosa pine. At the edge of the wood there is an alpine area of ​​low and delicate plants on rocky outcrops.
The oldest non-clonal organism ever discovered, a Great Basin bristlecone pine that is at least 5,000 years old, grew on the treeline near Wheeler Peak in the national park. It was shot down in 1964 by a graduate student and US Forest Service staff for research purposes. He was given the nickname of Prometheus, from the name of the mythological figure who stole fire from the gods and gave it to man.

Fauna –
The park is home to sixty-one species of mammals, 18 species of reptiles, 238 species of birds, two species of amphibians and eight species of fish.
The particular habitats of the Great Basin National Park therefore host an abundance of wildlife. Hares, pygmy rabbits, mountain cottontail, ground squirrels, chipmunks, and various mice live in the low-lying mugwort desert. Antlers, coyotes, foxes and badgers are less common inhabitants.
In the more rugged areas, on the mountain slopes and in the neighboring valley floor areas, in this park you can occasionally spot pumas, bobcats, marmots, rock squirrels and bighorn sheep. Other animals that can be found here are moose, mule deer, spotted skunks, shrews, ring-tailed cats, and ermine.
As for fish, the Bonneville Merciless Trout is the only fish native to the Great Basin National Park. It arrived in mountain waters naturally and was eventually isolated from changing climatic conditions. Other trout species, such as Lahontan’s cutthroat trout, rainbow trout, brook, and brown trout, were stored in the lakes and streams of the South Snake Range until the park’s incorporation in 1986.
Bird species are also varied. In the Great Basin National Park we find Canada geese, hawks, sparrows, bald eagles, tundra swans, barn owls, snow geese, killer deer, golden eagles, woodpeckers, mallards, wrens, great roadrunners, tits, great horned owls, crows, magpies and swallows.
Finally the amphibians. Only two species of amphibians live here and have been positively identified in the southern Snake Range and adjacent portions of Snake and Spring Valley: the western toad (Spea hammondii) and the leopard frog (Rana pipiens).