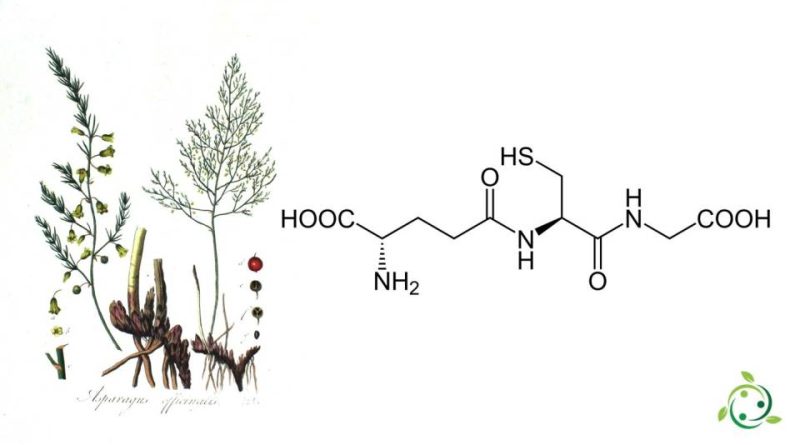 Glutathione, whose term in the official IUPAC nomenclature is: acid (2S) -2-amino-5 – [[(2R) -1- (carboxymethylamino) -1-oxo- 3-sulfanylpropan-2-yl] amino] – 5-oxopentanoic, is a tripeptide of natural origin with a brute or molecular formula: C10H17N3O6S.
Glutathione is known by the abbreviations GSH and has the alternative name of: γ-L-glutamyl-L-cysteinylglycine.
Glutathione is a substance consisting of three amino acids, namely, in the order: glutamic acid, cysteine ​​and glycine. This particular chemical composition gives glutathione a high ability to oxidize or reduce, protecting proteins and other oxidizable compounds from the deleterious action of free radicals.

Synthesis of glutathione –
Glutathione is synthesized starting from glutamate and cysteine, joined by an atypical peptide bond from the Glutamate-Cysteine ​​Ligase enzyme (consumes 1 ATP -> ADP + Pi) to form γ Glutamylcysteine. From here then the glutathione synthetase enzyme (consumes 1 ATP -> ADP + Pi) binds a glycine to the previous compound thus forming Glutathione.
Glutathione is part of the composition of a group of enzymes with an antioxidant action, called glutathione peroxidase. Many of these enzymes, whose activity is linked to the presence of selenium, catalyze the neutralization of hydrogen peroxide (a powerful free radical) and other peroxides.

Action of glutathione –
Glutathione has an important action both against free radicals or molecules such as hydrogen peroxide, nitrites, nitrates, benzoates and others; it also plays an important role in red blood cells, protecting these cells from oxidative dangers that would cause hemolysis. An important element for its functioning is NADPH. This molecule is a derivative of vitamin PP (nicotinic acid) and acts as an redox cofactor of the enzyme glutathione reductase (or GSR). The enzyme regenerates reduced glutathione (GSH) from oxidized glutathione (or GSSG) through electrons transferred from NADPH to GSSG.
Glutathione is used in medicine as a direct and “fast” antidote to paracetamol poisoning (also known as acetaminophen). This molecule is an analgesic and anti-fever whose main metabolism occurs in the liver. When in excess, paracetamol oxidizes glutathione.
The toxicity of paracetamol is therefore expressed in two mechanisms: with the depletion of glutathione and with the direct action of para-acetamido-quinone which causes necrosis of hepatic cells.
Glutathione is also used as a buffer in cases of heavy metal poisoning (such as mercury, cadmium, lead, etc.), since it displaces toxic ions forming sulphides (conjugates) that are more easily eliminated from the body.
At the human level, glutathione is only to a small extent bioavailable as its introduction into the body using external sources is poorly effective in increasing its plasma and / or intracellular concentration. The basis of its poor bioavailability are the nature of glutathione which, being a peptide, is a substrate for peptidases and proteases of the alimentary canal, and the absence of a specific carrier of glutathione at the cell membrane level.

Glutathione in food –
Glutathione is naturally contained in some plants including:
– asparagus, avocado, kale, Brussels sprouts, spinach, broccoli, garlic, chives, okra, tomatoes, cucumbers, almonds, avocados and walnuts.
However, glutathione levels tend to drop with storage and cooking.
To maintain adequate levels of glutathione, it is therefore important to consume foods that provide the building blocks necessary to increase its synthesis in a natural way.
These foods are rich in glutathione precursors, such as cysteine ​​and sulfur.

Glutathione deficiency –
Glutathione deficiency increases susceptibility to oxidative stress, which can cause or contribute to many diseases, including cancer, heart disease, Parkinson’s and Alzheimer’s.
Glutathione levels in the body can be reduced by a number of factors, including poor nutrition, environmental toxins, and stress. Furthermore, they decrease with age.
Maintaining adequate levels of glutathione is therefore important for the overall health of the body and can have benefits in certain pathological conditions characterized by increased oxidative stress.