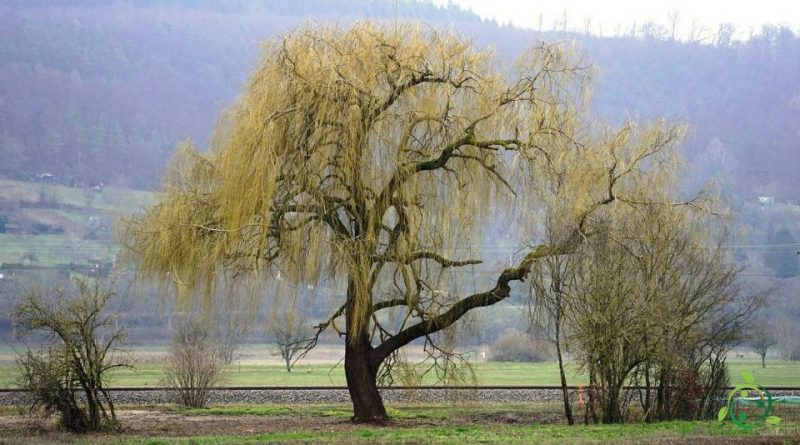 The white willow (Salix alba Linnaeus, 1753) is a plant of the Salicaceae family widespread in Europe, western Asia and North Africa. It is a typical plant of alluvial soils and is easily found in the woods bordering the great Italian lowland rivers.
It is a dioecious plant, with linear flowering spikes: the male flowers have two stamens with yellow anthers, the female ones are green with an elongated ovary. The fruit has an oblong-pear-shaped capsule, which opens in two valves to release minute stick-like seeds with long white hairs.

Cultivation –
For the cultivation of Salix alba, it should be taken into account that it is a plant that, even for the size it can reach, should be grown in sunny or semi-shady open spaces, in flat and not mountainous soils.
As for the climate, it is a species that does not tolerate cold climates, so it is convenient to plant it in places with a temperate climate.
From a pedological point of view, Although it is able to adapt to any type of soil, it prefers calcareous soils.
If grown in non-humid areas, it needs consistent and frequent irrigation; for this reason it is recommended to plant this species near water courses or lakes, in order to receive an essential water supply for its luxuriant growth. This tree does not need fertilizers because it draws the substances it needs from the fallen leaves during the autumn. Alternatively, organic fertilizers can be used.
The multiplication of Salix alba can take place by cutting or sowing. After cutting the branch from the mother plant, it must be planted in a substrate composed of peat and sand. Whether it is propagated by seed or by cuttings, it is necessary to keep the substrate moist, being careful not to exceed with irrigations, which can favor attacks by fungi and molds that are harmful to its health.

Uses –
The white willow is a plant appreciated as an ornamental essence in humid environments, it has always been widely cultivated for the production of wicker.
It is also used to consolidate bankland and landslide slopes, and its wood, light and not very valuable, is used in the paper industry. Used as a fuel it burns quickly, producing good heat for a limited time. Salix alba was once used as a support for vines as it had a fast growth; the plants in about 3/4 years were able to give the first poles, the small branches were not used to tie the vines as it has a rigid and fragile wood. While Salix viminalis (Salix viminalis L.) was and is still used to tie the vines, where the young branches (vinchi or osier) are used in agriculture to tie the vines. The plant is also rich in medicinal virtues. The salicylic acid compound at the base of the well-known aspirin was obtained from the white willow, and the bark contains tannin, used as a disinfectant and healing agent. From the wood of the white willow one of the best vegetable coals is also produced for the manufacture of black powder.