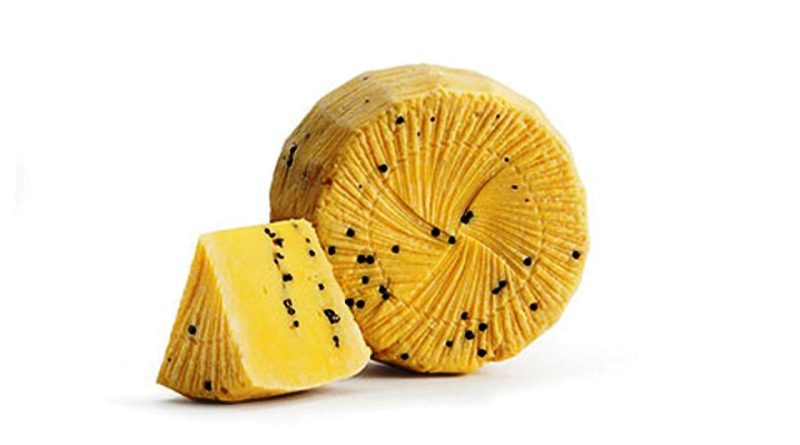 Piacentinu Ennese is a Sicilian cheese produced with whole sheep’s milk with a Protected Designation of Origin (PDO).

Origins and History –
Piacentinu ennese (in Sicilian piacintinu ennìsi) is a cheese whose etymology is not known. In this regard, various hypotheses are made:
– Piacentinu da piacente in the sense of “tasty, spicy”; it is considered the most probable etymology;
– Piacentinu from “piangentino” that is, cheese that cries, that has a tear.
Piacentinu Ennese is an aged PDO cheese with pressed paste obtained from whole and raw sheep’s milk, coming from the Sicilian Comisana, Pinzirita, Valle del Belice and their crosses, to which saffron and black pepper in grains are added which then give the cheese the intense yellow color and the characteristic flavor.
The origin of the production of Piacentinu Ennese PDO is linked both to the dairy activity of sheep’s milk, already widespread in ancient times, and to the cultivation of saffron. Legend has it that the addition of saffron to milk in the production phase is due to the period of Norman domination (11th century). The story tells that Ruggero the Norman in order to heal his wife Adelasia, suffering from a strong depression and at the same time a lover of cheeses, had a dairy product prepared with revitalizing qualities. In fact, saffron has always been famous for its stimulating and energizing properties.
The cheese has obtained the Protected Designation of Origin (D.O.P.) with EU Reg. N. 132 of 14.02.11 – OJEU L 41 of 15.02.11 – GURI n. 265 of 11/13/2015.
In addition, the Piacentinu Ennese D.O.P. is a Slow Food Presidium.
The Piacentinu Ennese, together with other peculiarities, such as the Late Fishing of Leonforte, the Broad Bean of Leonforte and the Pan del Dittaino (DOP), constitutes one of the main elements of the typical local gastronomy of the Province of Enna, in the geographical and naturalistic heart of the Sicily.

Geographic area –
The area of ​​milk production, cheese making, maturing of the “Piacentinu Ennese” is included between the territories of the Municipalities of Enna, Aidone, Assoro, Barrafranca, Calascibetta, Piazza Armerina, Pietraperzia, Valguarnera, Villarosa of the free municipal consortium of Enna.

Raw material –
Piacentinu Ennese is a Sicilian aged cheese (PDO), produced with whole sheep’s milk, with pressed paste obtained from whole and raw sheep’s milk, coming from the Sicilian Comisana, Pinzirita, Valle del Belice breeds and their crosses, to which they are added saffron and black peppercorns. The production period is between October and June and with a maturation / maturation of at least 60 days.

Description –
Piacentinu Ennese is a Sicilian cheese produced in a cylindrical shape with flat or slightly convex faces with a diameter of 20–21 cm, the sides are straight or slightly convex, 14–15 cm high.
The rind is hard, with the grooves of the baskets, and the weight varies between 3.5 and 4.5 kg and is characterized by the addition of saffron (experimentally grown in the province of Enna) and black peppercorns which , in addition to giving the piacentinu an unmistakable yellow-orange color, they give it a strong and slightly spicy flavor.

Production Method –
For the preparation of Piacentinu Ennese, sheep’s milk from one or two successive milkings is used, processed within 24 hours. The milk is brought to cooking temperature (38 ° C) and is transferred to the vat (wooden container) inside which saffron and rennet are added. We use rennet in paste from lambs and kids reared in the production area. The saffron is also locally produced and is characterized by a high content of crocin and picrocrocin, which gives an intense and characteristic final bouquet.
After coagulation, the curd is broken with a stick (patella) to obtain grains the size of a grain of rice. After the agglomeration of the granules, a cheesy mass is formed which is transferred onto a wooden or steel board and is subsequently cut and distributed in rush baskets (fascedde). Before being put into shape in the baskets, black peppercorns are also added to the curd.
A manual pressing is then carried out to facilitate the purging of the whey. The baskets containing the cheesy mass are then placed in the vat and covered with hot sheet for 3-4 hours. Subsequently, the pasta is extracted and left to cool and then uniformly sprinkled with coarse-grained salt (dry salting).
This operation is repeated twice at a distance of 10 days from each other.
In addition, a wooden vat, a wooden stick (patella), rush baskets (fascedde), wooden boards and a tin-plated copper boiler are used for the processing of this cheese.

Gastronomic use –
Piacentinu Ennese is a hard, fat cheese with a short and medium maturation, which can be eaten directly at the table or grated, if matured. It is highly appreciated when accompanied with fresh broad beans, seasonal vegetables, tomatoes, olives, even with aubergine caponata. It can be kept at the end of a meal and combined with a delicate honey, or with fruits such as pears, figs and even dried fruit. It is part of the traditional Enna cuisine and is used to stuff Ciarbiddùzzu abbuttunàtu, the stuffed kid. The flavor varies from slightly spicy to more intense depending on the seasoning, the smell is characteristic, with light notes of saffron.
It is an ingredient in the preparation of various recipes. In the first case it is possible to better appreciate the peculiar aromatic characteristics due to saffron. The Sicilian tradition also uses it in the breading of meats, in first courses (eg pasta with free-range chicken broth).