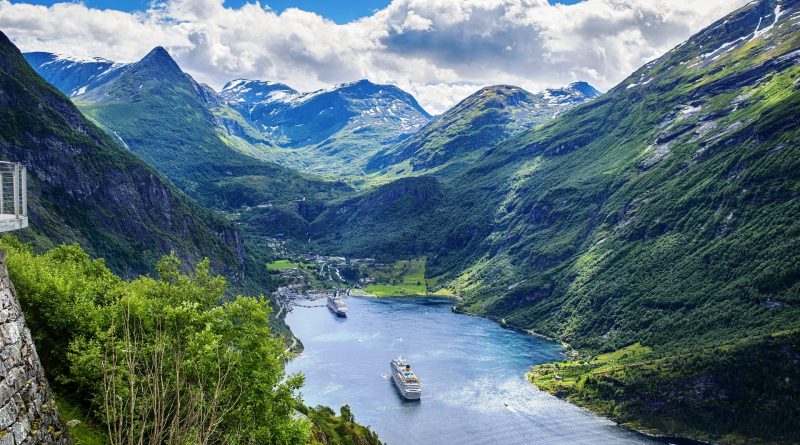 Norway is a parliamentary-type monarchical state in Northern Europe but is not part of the European Union.
It has an area of ​​385,207 km² and a population of 5,391,369 inhabitants (as of 2021).
The capital of Norway is Oslo with 669,060 inhabitants (as of 2017).
Norway has a territory that is largely included in the Scandinavian peninsula, extending to the Svalbard Islands (near the north pole), Jan Mayen Island (off the coast of Greenland) and Bouvet Island, near the North Pole. ‘Antarctica, which is not part of the Antarctic Treaty. The Antarctic territories of the Land of Queen Maud and the island of Peter I are also claimed.
Norway borders Sweden to the east and Finland and Russia to the north-east, while the Skagerrak separates it from Denmark to the south. Norway’s expansive coastline, which overlooks the Atlantic Ocean and the Barents Sea, is etched by world-famous fjords. The Svalbard and Jan Mayen islands are ranked second to last in the list of states and dependencies by population density in descending order.

Geography –
Norway is a country characterized by a morphology with indented coasts, which are interrupted by huge fjords and thousands of islands that stretch for many kilometers. The border line is shared with Sweden for 1619 km, with Finland for 727 km and finally to the east with Russia for 196 km. Norway is the northernmost point of continental Europe.
The most characteristic aspect of the Norwegian territory is the very extensive development of its coasts: over 21,000 km including all the islands. The coasts are very indented and interspersed with the deep inlets of the fjords.
Norway is the northernmost European state, reaching a latitude of 71 ° 11 ‘where the promontory of Knivskjellodden is located, located just north of the North Cape. It also occupies the westernmost part of the Scandinavian peninsula, extending for about 1700 km from north to south. It is crossed by the Arctic Circle; for this reason phenomena such as the midnight sun in summer and the northern lights in winter can be observed in the northern areas.
It is also part of the Boreal biogeographical region.
The territory of mainland Norway is mainly mountainous, being crossed from north to south by the Scandinavian Mountains. The highest point is represented by Galdhøpiggen (2,469 m), located in the Jotunheimen massif; the other highest peaks are Glittertind (2,465 m), until recently considered as the highest peak, and Store Skagastølstind (2,403 m). In the southern part there are many coastal and flat areas.
Geologically linked to the Baltic shield, the Norwegian territory has a conformation that has recently undergone the tertiary uplift and the creation of fjords, which took place in the last phase of erosion. Therefore the basic structure, which dates back to very ancient eras, is formed by a penepiano – that is an almost flat filling surface that can become plain (if at sea level) or be considered a plateau – of rocks, on which, during the he Caledonian orogeny, the mountain range that today is the backbone of the Scandinavian peninsula rose violently; the same mountain range is also the birthplace of many rivers (directed both towards the Atlantic Ocean and which therefore cross Norway and towards the Gulf of Bothnia and which therefore cross Sweden), as well as the natural and political border between the two themselves villages. Furthermore, in the Quaternary the erosion and modeling of the glaciations also began, which dug deep valleys, rounded the reliefs and consolidated the river network.
In the north we find a single vast plateau from 300 to 500 meters high, whose landscape is sporadically interrupted only by some rare and not very high hill groups. From here the mountain range develops along the coast which runs south-west and crosses the whole country. The central-southern part is the highest and also includes some glaciers over 2,000 m.
In general, the western side is steep and carved out by valleys that end on the sea forming the fjords. The inner side of the Scandinavian Mountains, on the other hand, has a gentler inclination.
In addition, at all latitudes there are well-sheltered ports and cities such as Stavanger, Bergen (so protected as to be one of the wettest and least snowy Norwegian cities ever), Trondheim, Bodø, Narvik and Tromsø. Finally, in front of the coasts, islands and archipelagos such as Senja and Kvaløya and the archipelagos of Vesterålen and the Lofoten Islands emerge everywhere, except in the extreme south-eastern part.
From the hydrographic point of view, Norway is characterized by some short watercourses. The longest is Glomma (570 km), which flows into the Oslofjord, while other important ones are Pasvikelva (145 km) and Numedalslågen (352 km).
The lakes, on the other hand, are very numerous, about 450,000, of which only 400, however, with an area greater than 5 km². The largest of these is Mjøsa (365 km²), followed by Røssvatnet (210 km²) and Femund (204 km²).
Due to its morphology this country is rich in waterfalls; the highest is Vinnufossen, located in the county Møre og Romsdal, and makes a jump of 865 m.
There are several places in the area surrounding the Sogne Fjord where majestic waterfalls can be seen cascading down the steep sides of the mountains. Some of these waterfalls are among the highest in Norway.
Also important are the glaciers, the largest of which is the Jostedalsbreen, with an area of ​​487 km². 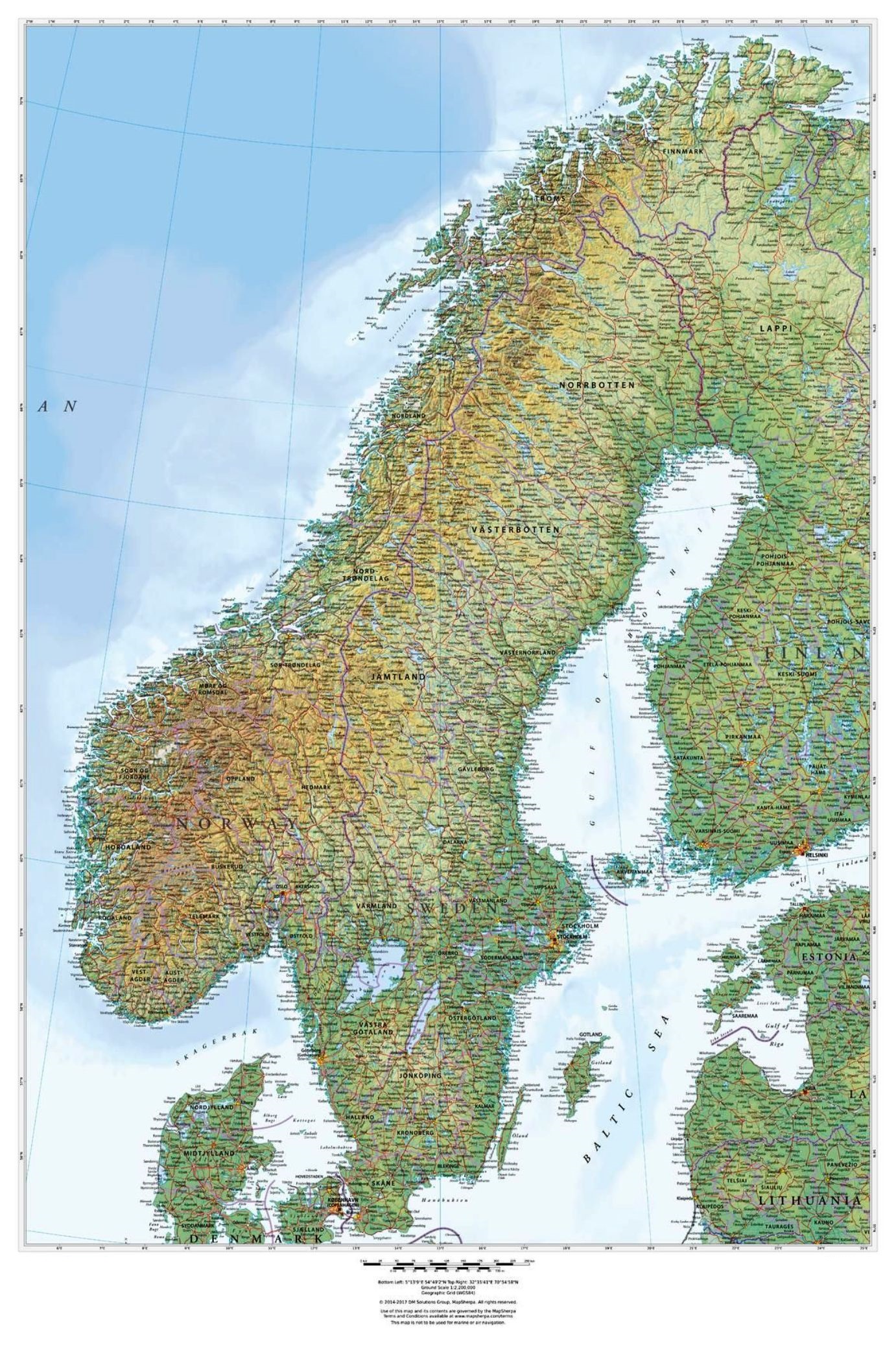 Climate –
The climate of Norway is Atlantic and Arctic but relatively mild compared to latitude due to the Gulf Stream, which starting from Mexico warms the marine waters of the Atlantic coasts making the annual average temperatures above zero even in areas much further north of the Arctic Circle. This avoids the formation of sea ice, favoring port and fishing activities. The average annual temperatures of the coasts range from around 7–8 ° C in the city of Stavanger to 3–4 ° C in Trondheim, up to 2–3 ° C in Vadsø. The downside, however, is given by the storms that form in the open sea around Iceland, by contrast between the cold continental air (coming from Greenland and the Canadian islands) and the warm waters of the ocean: these storms, harbingers of heavy rainfall, are common especially during autumn and early winter. Furthermore, during the summer there can be particularly cool and rainy periods, as well as with characteristics of marked variability. In any case, the average temperature in July is above 15 ° C on the whole central-southern coastal strip up to the Sogn og Fjordane region.
We find a different climate in the capital Oslo, characterized by warm summers with an average July temperature of 17 ° C and thanks to the many hours of light, maximum temperatures close to 30 ° C between June and July are possible. On the other hand, winters are cold (about −5 ° C on average in January) because the mitigating effect of the Gulf Stream is blocked by the mountains: in the colder months it easily drops below −20 ° C, and it is not uncommon to have lows around zero in May and September. The real “cold” winter is found in inland areas, especially the counties of Oppland and Finnmark: in the latter the minimum temperature record was recorded, −51 ° C in Karasjok.
From the pluviometric point of view, Norway is a country with rather abundant rainfall, especially in the Atlantic regions, especially in the southwestern mountainous area (from 1500 to 3000 mm of rain and snow). On the other hand, they are less abundant in the north, even less in the cultivated areas and near the capital, with about 600 mm per year. The maximum peak is summer or late-summer in the more continental regions, including Oslo, while on the southwestern Atlantic coast it is located in autumn and anticipates more and more as you go north.

Flora –
In Norway the flora is obviously affected by the climatic conditions. However, a quarter of the territory is occupied by forests, limited to inland areas above 1000 m of altitude. To the north, in the colder areas, the tundra landscape prevails, characterized by a vegetation of shrubs and lichens, while the inland areas, more sheltered, are covered with forests of oak, beech, elm and birch.
Plants with berries are also very popular: the most common edible varieties are blueberries, Tufted Duck and the delicious Arctic Blackberry (Moltobaer).
Along the west coast, winters are rather mild, with rare snowfalls that give way to plants such as Scilla verna and Erica pupurea.
To protect some environmental peculiarities in Norway there are over 33 national parks. Norway protects the environment according to the classification of protected areas in: Protected Landscapes, Nature Reserves, Natural Monuments.

Fauna –
The Norwegian fauna in the north is characterized by animals such as reindeer, polar hare, fox and in particular the lemming, while in areas with a more temperate climate, deer, elk prevail (whose grazing areas are significantly reducing) , wolves (critically endangered), and bears.
Musk oxen were reintroduced in 1947 from Greenland.
There are also numerous species of fish that populate the waters of Norway: salmon, trout, grayling, perch and pike live in the lakes and streams; in coastal waters the most common species are herring, cod, halibut and mackerel.
The Svalbard islands have the highest concentration of birds (most of which migratory) in the North Atlantic area: there are geese, terns, arctic fulmars and arctic gulls. Among the mammals, we find reindeer, foxes, seals, walruses and of course the symbol of the Arctic: the white bear.
Unfortunately, together with Japan and Iceland, Norway is one of the main whaling countries, one of the animals with the highest risk of extinction in the world.
Among other things, the ruthless whale hunting, which Norway allows despite international bans, clashes with the clean image that this country wants to give of itself. The number of specimens killed, particularly pregnant females, far exceeds that of Japan and Iceland combined. The meat of the cetaceans is mostly used in the breeding of fur animals.