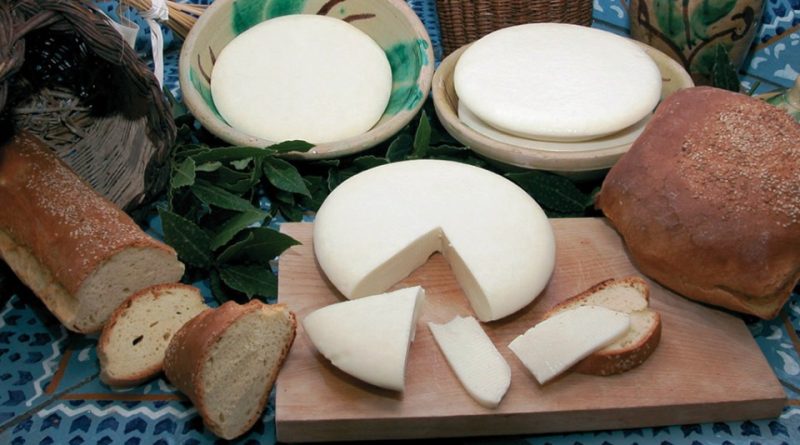 Origins and History –
The Belìce Valley has a very long tradition in the practice of sheep farming, especially aimed at the production of cheeses, among which Vastedda stands out.
Vastedda della Valle del Belìce is a very original DOP cheese made from sheep’s milk and the name, vastedda, derives from the ceramic plate where the shape is left to rest after spinning. Produced in the Belìce Valley in the summer, it was created to meet the cheesemakers’ need to recover pecorino cheeses that had defects. The name derives from the dialect word “vast” that is spoiled, gone bad. The unsuccessful pecorino cheeses were spun at a high temperature, to make an ovoid-shaped cheese to be eaten fresh, within two or three days.
Valle del Belice boasts a very long tradition in the practice of sheep breeding, especially aimed at the production of cheeses. This tradition, in methodologies and timing, has remained almost unchanged: the sheep are still raised on pasture and sheltered in sheepfolds that guarantee the total well-being of the animals and consequently the best quality of the milk. Similarly, vastedda is still today an artisan cheese, worked by master cheesemakers with extreme skill and professionalism, through the use of typical equipment in wood and rush, which give the product its peculiarities.
Nowadays the processing style varies according to the production area and the habits of the cheesemaker. Usually raw milk, from one or two milkings, is coagulated at about 35-36 ° C with lamb or kid rennet. The breaking of the mass is carried out with a wooden stick until it is reduced to large granules like a chickpea or a grain of rice; after a short stop, the pasta is collected in a linen cloth and placed on a board. After about an hour, it is cut into pieces, placed in a wooden container, and covered with hot whey at 55-60 ° C, to facilitate fermentation. The ripening period varies depending on the time of processing, the external temperature and humidity. The most experienced cheesemakers are able to manually establish the exact ripeness of the dough by doing spinning tests. Once the right acidity has been reached, the mass is cut into slices in a wooden container, in which very hot water (90 ° C) is added, and processed. In the final phase of the spinning, when the dough reaches the right consistency, the mass is cut into portions which, when processed, take the form of spheres. These, carefully closed, are placed in a deep ceramic plate, where in a short time they become ovoid (similar to a flat loaf).
It is the only Italian stretched curd sheep cheese, protected by a Slow Food Presidium. It was born with the idea of ​​recovering “defective” cheeses (vast in dialect means spoiled) by spinning them.

Raw material –
Vastedda della Valle del Belìce PDO cheese is obtained with whole, raw sheep’s milk with natural fermentation acidity, from Valle del Belìce sheep, coming from farms located in the production area referred to in Art. 3 of the specification.
The sheep feeding system is also regulated, the milk must come from one or two milkings, one in the evening and the next morning; processing must be performed within 48 hours of the first milking. Milk is therefore allowed to be refrigerated in full compliance with the minimum values ​​provided for by the relevant legislative provisions in force. The milk, suitably filtered with special sieves and / or cloth filters, is traditionally heated in tinned copper boilers, up to the maximum temperature of 40 ° C with direct wood or gas fire; then lamb rennet is added at a temperature of 36-40 ° C.
The rennet used for the essentially rennet coagulation of milk is obtained from the abomasum of suckling lambs of the animals indicated in this production specification. Furthermore, art. 5 of the specification goes into detail on other aspects related to breeding and processing.

Description –
Vastedda della Valle del Belìce PDO is still today an artisan cheese, processed by master cheesemakers with extreme skill and professionalism, through the use of traditional techniques and equipment in wood and rush.
Vastedda della Valle del Belìce PDO is a cheese with a typical focaccia shape, with a diameter of 15-17 cm and a weight of 500-700 g. It has no rind, the surface is ivory white and smooth while the paste is white, smooth and not grainy, with no holes. The flavor is typical of fresh sheep cheeses, a little sour but not spicy.
The product is marketed all year round in the Vastedda type of Valle del Belìce PDO. It is packaged in whole and vacuum-packed forms only.

Production Method –
Vastedda della Valle del Belìce is a PDO cheese made from milk, from one or two milkings, and must be processed within and no later than 48 hours. It is then filtered with special sieves and / or cloth filters, heated to a maximum temperature of 40 ° C in tinned copper boilers, over a direct wood or gas fire, and finally added with lamb rennet paste. The curd thus obtained must then be broken by means of the so-called patella, to form lumps the size of a grain of rice. The curd is left to rest for five minutes before being taken and transferred, without being pressed, into reeds. After 24-48 hours the sour curd is cut and placed in the wooden container called piddiaturi, where it is covered with scotta or hot water (80-90 ° C) for 3-7 minutes until the mass becomes compact and can be spun. Out of the water, cords are then formed, which are folded and modeled into braids, from which spheres will be obtained which, worked by hand and placed on ceramic plates, will take the typical shape of the Vastedda. Once cooled, 6-12 hours after spinning, the cheeses are salted in brine for a time ranging from 30 minutes to two hours and after 12-48 hours they are ready to be consumed.

Gastronomic use –
This cheese is extraordinary for its fragrance, persuasiveness and gustatory intensity; Vastedda should be eaten very fresh, within two or three days: after about an hour from forming it is ready for consumption. It is delicately scented and in the mouth a note of butter prevails with a background of herbs from the Belìce valley, such as grasses and valerian. The best way to enjoy it is to cut it into large slices and dress it with Sicilian extra virgin olive oil, tomato and oregano. It can also be used as an ingredient in some local dishes, such as the typical pane cunzato.
For this reason, Vastedda della Valle del Belìce PDO can be kept in a cool and dry place for a few days.
Vastedda della Valle del Belìce PDO, also considered as a sheep’s mozzarella, is used in the preparation of sandwiches and pizzas. We recommend pairing with a good glass of Sicilian white wine, perhaps a Grillo or a Chardonnay.