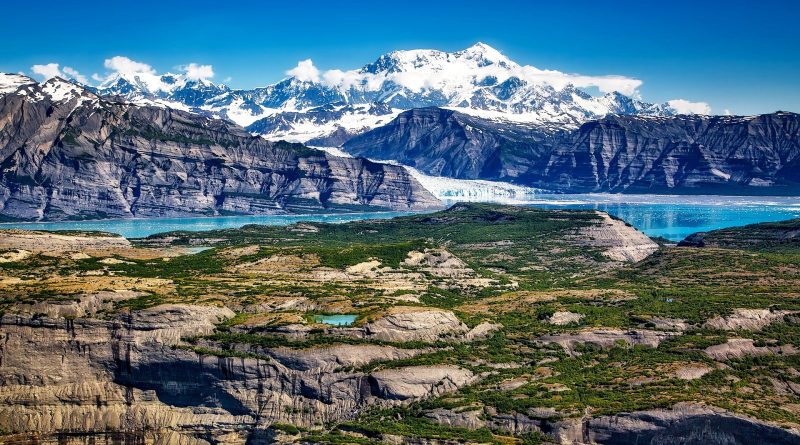 Wrangell – St Elias National Park & Preserve whose WDPA code is: 22490 is a protected area in the United States located in Alaska, with a land area of ​​53,321 km², managed by the National Park Service.
Wrangell – St Elias National Park & Preserve is located in the southern part of Alaska and is the largest national park in all of the USA with the nation’s second peak, Mount Saint Elias, 5,489 meters high.
The park is accessible via a highway from Anchorage; two roads penetrate the park, making the interior easily accessible for campers and trekking enthusiasts. In 2004, there were over 57,000 tourists in the park, a rapidly growing figure.
The transboundary park system comprising the Kluane, Wrangell-St. Elias and Glacier Bay and the Tatshenshini-Alsek Provincial Park was declared a UNESCO World Heritage Site in 1979, both for its highly spectacular landscapes and for preserving the very important habitats of the grizzly, caribou and Dall sheep.

Geography –
Wrangell – St Elias National Park & Preserve is characterized by countless wonders of geology. Imposing peaks, volcanoes, countless glaciers and huge rivers set the stage for unsurpassed geological exploration. This diverse landscape attracts researchers from around the world to investigate volcanism, glaciation, plate tectonics, and Quaternary geology.
Southern Alaska is a mosaic of geologically distinctive crustal fragments separated by major fault systems. These fragments exist in all shapes and sizes, but each has its own story. All are exotic, that is, they were formed elsewhere and transported to the current position by the movements of the crustal plates. Some have been rotated relative to their neighbors, and some have been moved great distances relative to less traveled neighbor fragments. Thus, the adjacent fragments generally differ in the characteristics of the rocks that constitute them and differ in the structural modifications that those rocks have undergone.
In southern Alaska, the juxtaposition of disparate terrains created a large-scale collage. Collectively, the processes by which the collage was assembled (by which south-central Alaska grew with the addition of exotic terrains over the last 200 million years or so) are called accretion tectonics. This process continues today in Alaska: the last land to arrive, Yakutat soil, is still being moved, jamming against and under the land to the north and west.
The composition of these soils is varied: some represent pieces of old continental crust, while parts of others are made up of oceanic crust. Some fragments represent the remains of volcanic island chains formed in the open sea (such as the Aleutian islands). Others represent volcanic chains formed on the edge of a continent (such as western South America). Some soils are made up almost entirely of old eroded material from the North American border.
These soils are assumed to have formed, for the most part, from in and around the Pacific Ocean basin. Some may have been carried as “rafts” pushed onto a conveyor belt of converging oceanic crust. With sufficient time, the oceanic crust created by the expansion of the seafloor has the potential to transport exotic terrains great distances from their places of origin. Other land may have been carried north along faults near the continent’s border. The Yakutat terrain provides a prime example, having been transposed 375 miles along the Queen Charlotte-Fairweather transformed fault system over the past 30 million years.
Wrangell – St Elias National Park & Preserve is, therefore, a fantastic laboratory and its extraordinary collection of mountains and geological features was one of the main reasons for the creation of the park.
Within the park there are four mountain ranges: the Wrangell Mountains, the St. Elias Mountains, the Chugach Mountains and the Alaska Range (Mentasta / Nutzotin Mountains) and were created by plate collisions in the earth’s crust. Many of the peaks within the Wrangell Mountains were once active volcanoes. Today only Mount Wrangell remains active.

Climate –
The climate of Alaska is generally cold but can be distinguished according to the area of ​​the country: in the south, in particular Juneau, it is the only place in the state where temperatures are milder, in fact it is around an average of -8 ° C, and never higher than 0 °.
The area is also the snowiest because the ocean accumulates humidity: the average accumulations reach an average of 8 meters. Inland, on the other hand, there is a much more rigid climate, in fact Fairbanks has an average in January of −19 ° C / −28.5 ° C and in July of 12 ° C / 22 ° C, the other locations are often more cold and January averages reach −34 ° C, roughly as much as the coldest places in the Yukon, where monthly averages are below zero 8 months a year and the lowest temperatures are recorded, down to −62, 1 ° C a. The snow cover lasts from 6 to 8 months and the rivers are ice-free for only 4 months.
Precipitation is very scarce at 200-250 mm per year, most of it in summer, the sea is frozen from October to June with a maximum temperature of 1 ° C, the snow cover remains from September to early June, but the residues can be seen all the year. 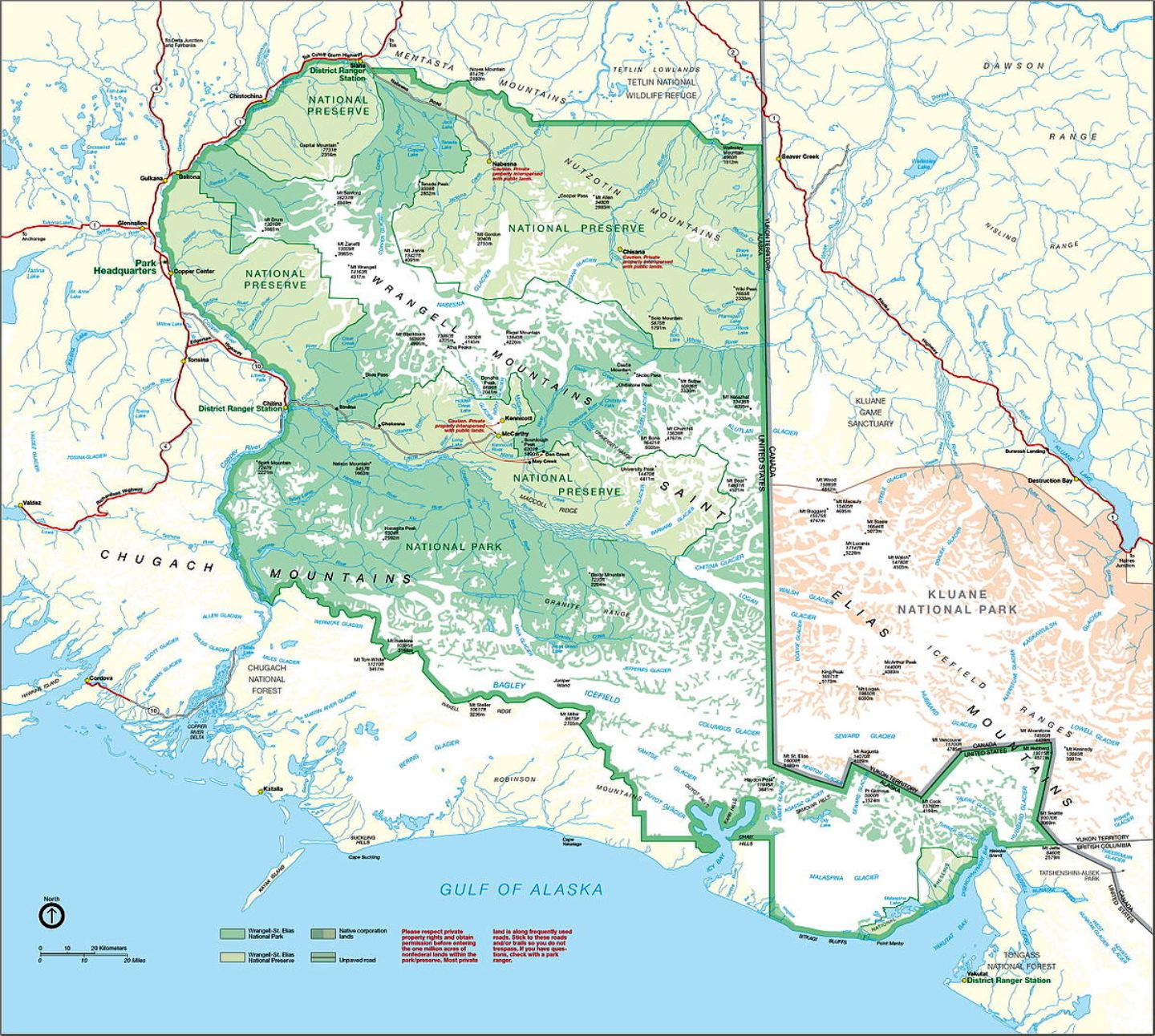 Flora –
The most common flower in Alaska appears to be fireweed, which is found in vibrant purple lines along the highways. In the Wrangells, it accounts for 54% of the flora of Alaska (which has about 1535 species) and 69% of the flora of the Yukon Territory. The high diversity of subarctic plant communities at Wrangell-St. Elias is partly due to its large size, to the three climatic zones it covers (maritime, transitional and inland), to the wide variety of morphologies and to the large and complex topographical relief found within its borders. Some regions of the park have a strong coastal influence, most notably in the Chugach-St. Elias and the Southern Wrangell Mountains. The extension of the Pleistocene glaciation had an important effect on the distribution and composition of the park’s flora, most of which was frozen over during the last glaciation.
A recent inventory of the park’s flora indicates that there are 936 species of vascular plants. The sedge family has the largest number of species (111) in the park, followed by the grass family (79), the sunflower family (86) and the mustard family (74). There are 13 tree species, 27 willow species and 43 introduced species in the park. The park also has 327 documented non-vascular plants including 31 liverwort species, 131 lichen species, and 165 moss species.
Biologists and ecologists keep track of the plant species within the park. They are documented in a database called NPpecies.