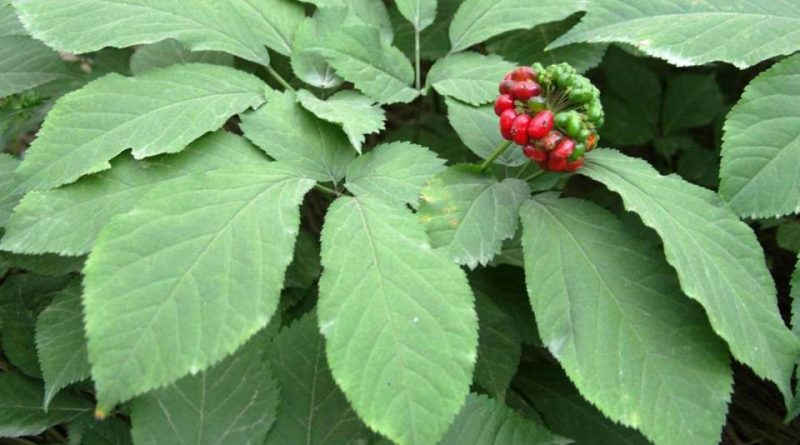 Etymology –
The term Panax comes from the Greek πάναξ panax panacea (from πᾶς, πᾶσα, πᾶν pas, pása, pan tutto and from ἀκέια acèia cura, remedy): a remedy for all ills.
The specific epithet quinquefolius comes from quinque, five and folium, leaf: with five leaves or leaflets.

Geographic Distribution and Habitat –
American ginseng is a plant native to eastern North America where it is found in eastern and central parts and partly in southeastern Canada.
It is also cultivated outside its spontaneous range, such as in China. Since the 18th century it has been mainly exported to Asia, where it is highly prized for its cooling and sedative medicinal effects.
Its natural habitat is that of the deciduous forests of the Appalachian and Ozark regions of the United States, where it grows in well-developed forest soils, typically mesic clayey soils. In most cases, the forests have a closed canopy of Acer saccharum (sugar maple), Tilia americana (lime tree) or Quercus rubra (northern red oak). Furthermore, Panax quinquefolius does not tolerate seasonally flooded habitats, such as those found along a stream or river, or on the edge of a swamp. 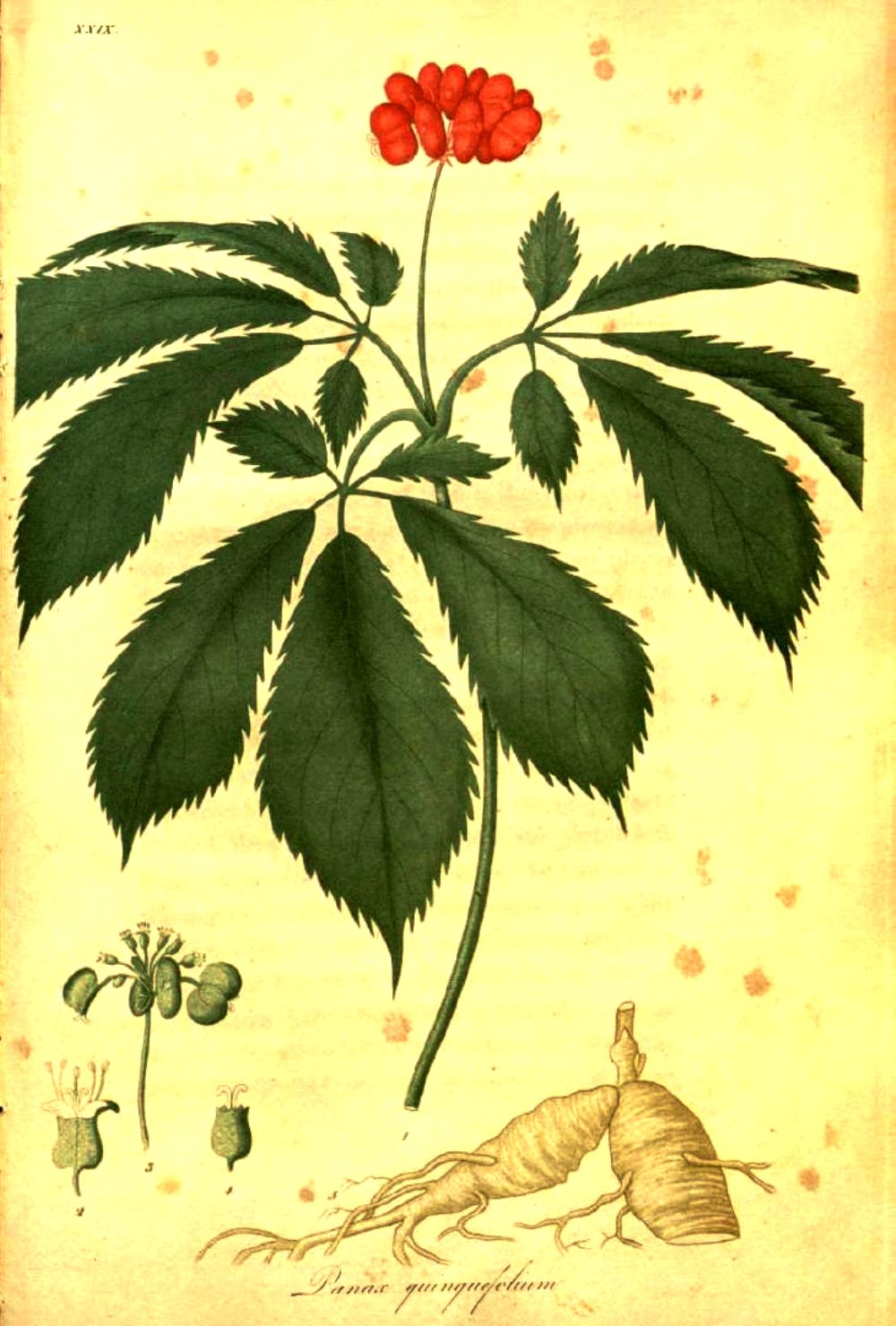 Description –
Panax quinquefolius is a plant that grows from 15 to 46 cm in height. The plant grows from an aromatic rhizome, which resembles a small parsnip, and which forks as it matures.
It usually bears three leaves, each with three to five leaflets, 5 to 13 cm long.
The flowers are small, white in color, gathered in umbels while.
The small and greenish white to yellowish green flowers are carried by a solitary umbrella; this arises on a long stem from the central axilla of the leaf between late spring and early summer. The flowers are lightly scented but not particularly showy.
Each flower umbrella gives way to a cluster of red berries.

Cultivation –
Panax quinquefolius is a plant that in addition to growing spontaneously is cultivated both in the United States but also elsewhere such as in China.
To grow it needs completely shaded environments.
It can be grown commercially, in artificial shade, in the woods or with methods that simulate the wild habitat and is usually harvested after three or four years, depending on the cultivation technique; the method that simulates natural conditions often takes up to 10 years before harvest.
Unfortunately in the United States, although not generally listed as an endangered species, it has been declared, in its natural state, threatened by some states. States that recognize American ginseng as endangered are Maine and Rhode Island. States that recognize American ginseng as vulnerable are New York and Pennsylvania. States that recognize American ginseng as threatened are Michigan, New Hampshire, and Virginia. Connecticut, Massachusetts, North Carolina, and Tennessee recognize American ginseng as a special concern species.
In Canada, American ginseng is listed as nationally endangered, particularly in Ontario, and as threatened in Quebec (the highest-risk categories in both provinces).
Furthermore, recent studies have shown that through the numerous cultivation techniques with which American ginseng is produced, fungal molds, pesticides and various metals and residues have contaminated the crop. While these contaminating effects are not considerably substantial, they pose health problems that could lead to neurological problems, intoxication, cardiovascular disease and cancer.

Customs and Traditions –
American ginseng is a plant commonly used as a herb in traditional medicine, including traditional Chinese medicine.
The name ginseng derives from the Chinese herbal term jen-shen. Other Chinese names are huaqishen (simplified Chinese: 花旗参; traditional Chinese: 花旗參; pinyin: huāqíshēn; Cantonese Yale: fākèihsām; literally ‘Flower Flag ginseng’) or xiyangshen (simplified Chinese: 西洋参; traditional Chinese: 西洋參; pinyin: xīyángshēn; Cantonese Yale: sāiyèuhngsām; lit. ‘western ocean ginseng’).
It is believed to represent the refreshing qualities of yin, while Asian ginseng embodies the warmer aspects of yang.
In traditional medicine, the root and leaves of the plant were used by Native Americans. Since the 18th century, the roots have been harvested by “song hunters” and sold to Chinese or Hong Kong traders, who often pay high prices for particularly ancient wild roots.
American ginseng was originally imported to China via the subtropical Guangzhou, the seaport near Hong Kong. Since American ginseng was originally imported to China via a subtropical seaport, Chinese doctors believed that American ginseng must be good for yin, because it came from a warm area. They didn’t know, however, that American ginseng can only grow in temperate regions. However, the root is legitimately classified as more yin because it generates fluids.
From a scientific point of view, there is no evidence that American ginseng is effective against the common cold or for severe infections. There is provisional evidence that it can shorten the duration of the disease when used preventively.
Like Panax ginseng, Panax quinquefolius contains dammaran-type ginsenosides, or saponins, as the main biologically active constituents. Dammaran-type ginsenosides comprise two classifications: 20 (S) -protopanaxadiol (PPD) and 20 (S) -protopanaxatriol (PPT). Panax quinquefolius also contains high levels of ginsenosides Rb1, Rd (PPD classification) and Re (PPT classification), higher than those of P. ginseng.
When taken orally, PPD-type ginsenosides are primarily metabolized by intestinal bacteria (anaerobes) to monoglucoside PPD, 20-O-beta-D-glucopyranosyl-20 (S) -protopanaxadiol (M1). In humans, M1 is detected in plasma starting seven hours after taking PPD-type ginsenosides and in urine starting 12 hours after taking. These results indicate that M1 is the final metabolite of PPD-type ginsenosides.
M1 is referred to in some articles as IH-901, and in others as compound-K.
From an ecological point of view, American ginseng was once particularly widespread in the Appalachian and Ozark regions (and in adjacent wooded regions such as Pennsylvania, New York and Ontario). Due to its popularity and unique habitat requirements, the wild plant has been overexploited, as well as lost due to habitat destruction, and is therefore rare in most of the United States and Canada.
In the areas of origin this plant is also negatively affected by deer grazing, urbanization and habitat fragmentation.
Ontario is the world’s largest producer of North American ginseng.
Marathon County, Wisconsin account for approximately 95% of U.S. production. Additionally, some American ginseng growing programs, grown in woodlands in Vermont, Maine, Tennessee, Virginia, North Carolina, Colorado, West Virginia, and Kentucky, have encouraged ginseng planting both to restore natural habitats and to remove pressure from any leftover wild ginseng.
Among other uses, it should be remembered that Panax quinquefolius is an ideal plant in herb gardens, native plant gardens, woodland gardens or shade gardens. Generally it is not cultivated in borders due to lack of sufficient ornamental interest.

Preparation Method –
Both the leaves and the roots of the American Ginseng are used.
This plant has always been used as a supplement to improve the state of well-being, to balance normal body functions, to solve digestive problems such as nausea and vomiting, but also as an anti-inflammatory to treat arthritis. Always recommended as a tonic to relieve age-related ailments, it is able to increase vitality and fight psychophysical stress.

One thought on “Panax quinquefolius”