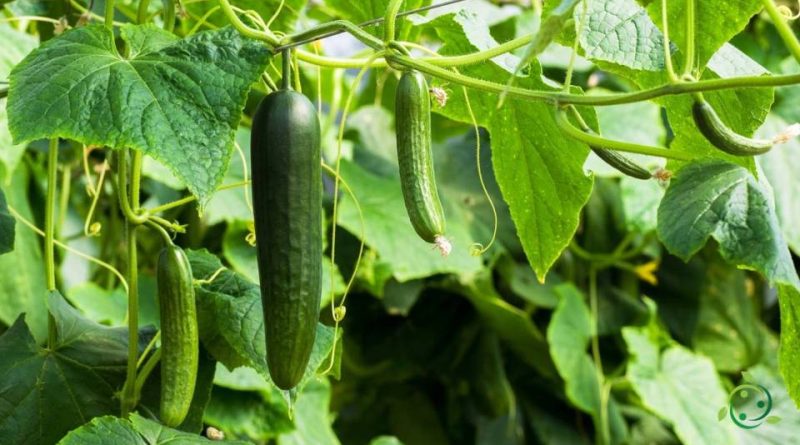 Cucumber (Cucumis sativus L., 1753) is a vegetable of the Cucurbitaceae family, native to eastern and southern Asia.
It is a vegetable grown worldwide and used for both food and cosmetic purposes.

Features –
The cucumber is a creeping or climbing plant when it finds supports, to which it attaches through the cirrus clouds produced by the stems and branches.
The leaves are rather large, palmate-lobed, with long petiole, dark green and rough. The five-lobed yellow flowers, not very large, are unisexual, carried by the same plant (monoecious plant), the males in groups of about five subjects, the females are solitary or in pairs.
The fruit is a pulpy berry rich in water with an elongated shape, similar to that of the courgette, thick skin, although edible, slightly lumpy and green in color, juicy white pulp, slightly acidulous, with seeds in the central part.

Nutritional factsheet –
Cucumber is eaten raw cut into slices in salads and enters as a component of mixed salads or as a garnish of cold dishes. Harvested immature, small in size (gherkin), it is put in vinegar and consumed in mixed starters and becomes sliced ​​in the composition of the giardiniera.
This vegetable is almost devoid of calories (13 kcal per 100 g of product), which makes it common in diets, it is mainly composed of water (96%), available carbohydrates (2%) and mineral salts such as [6] potassium (140 mg), calcium (16 mg), phosphorus (17 mg), sodium (4 mg). It also contains 11 mg of vitamin C, while the intake of vitamins from the other groups is negligible.

Property –
Cucumber, if used for food purposes, should preferably be consumed when it is hard to the touch: if the pulp is not firm it means that the vegetable is no longer good.
Its main use is however in mixed salads, cut into slices, or as a garnish for cold dishes and more typically summer preparations.
From the point of view of digestion it is not well tolerated by everyone: in particular it is sometimes indigestible for children. There are different types of cucumber, including the hybrid variety between cucumber and melon typical of Puglia called “Carosello Bianco Barese”, often familiarly called “Watermelon”.
But this vegetable also finds uses in the cosmetic field. Already in the sixteenth century, the Italian doctor and humanist Pietro Andrea Mattioli recommended cucumber seeds and juice to “make the skin beautiful”.
It is in fact indicated to soften and moisturize the skin that tends to take on greater elasticity, its juice is recommended after exposure to the sun, while the pulp is effective for dry skin.
You can make refreshing face masks with the pulp while its seeds are used for toning and firming masks, and the juice for soothing compresses.
To reduce wrinkles and make the skin softer and more radiant, it is recommended to cleanse, reduce and clean dilated or clogged pores you can make a mask with 1 chopped cucumber with olive oil and a few drops of lemon juice. It is better than creams and certainly cheaper.
Furthermore, being rich in sulfur, cucumber is indicated for treating the skin: it is used to lighten age spots, and decongestants. It can in fact soothe sunburn and reduce wrinkles.