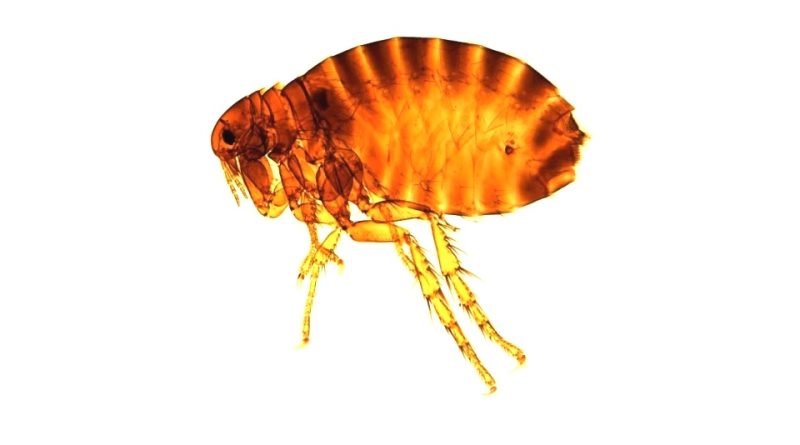 The human flea (Pulex irritans Linnaeus, 1758) is an insect belonging to the Pulicidae family.

Geographic Distribution and Habitat –
Pulex irritans is an insect native to Central and South America, where it evolved with only one host. Despite its origins it is now a cosmopolitan species, most likely due to the fur trade after the 18th century and the transport of pets in more recent decades. Due to the cosmopolitan distribution of this insect, research was conducted to show that individuals of P. irritans, when sampled from Spain and Argentina, only showed significant differences when comparing molecular data.
The use of morphometric data, which is often the method for flea identification, did not show significant levels of divergence between populations. The combination of morphological and molecular data has identified the possibility of cryptic species. This indicates the need to reconsider the taxonomic classifications of these fleas.
It is a cosmopolitan species that can infest, contrary to what the common name says, a wide spectrum of possible hosts; it lives on domestic mammals (dog, cat, horse, pig) as well as on humans and sometimes also on wild animals (rats, foxes, roe deer).

Morphology –
The Pulex irritans, in the adult stage, is an insect about 1,5-4 mm long and with a laterally flattened conformation which allows them to advance rapidly even in the midst of thick fur. It is dark brown in color, they are wingless and has a sucking mouthparts that help feed on the host’s blood and rounded head. Most fleas are distributed in egg, larva or pupa stages.
The eggs are about 0.5 mm long, are oval in shape and pearly white in color.
The larvae are about 0.6 mm long. They are creamy white or yellow in color, have 13 segments with bristles on each segment.
The pupae are approximately 4 x 2 mm in size.

Attitude and Life Cycle –
Pulex irritans is a holometabolous insect with a four-part life cycle consisting of eggs, larvae, pupae and adults.
Fleas in general have a very intense sex life, their mating must exceed 60 minutes to be fruitful.
After feeding on blood, the female lays 4-8 eggs at a time, for a total of several hundred eggs; a single female can produce 800-1000 eggs during her life, which normally lasts two years.
The eggs are laid on the host’s body, on the sheets or in a nest but without being firmly anchored there; these hatch giving life to the larvae in a period of about 3-4 days. Eggs are often laid on the host’s body, but they often fall in many different places.
The larvae feed on organic debris in the environment. The larvae eventually form pupae, enclosed in cocoons that are often covered with debris from the environment (sand, pebbles, etc.). The larval and pupal stages are completed in about 3-4 weeks, after which the adults hatch from the pupae.
The adult usually appears after 1 to 2 weeks, once the larva and pupal stage is complete. However, if conditions are unfavorable, the pupal stage can last up to a full year.
The larvae feed on a variety of organic debris. After undergoing three separate moults, the larvae pupate, then emerge as adults.

Ecological Role –
The human flea is a hematophagous insect that generally affects humans on the legs and ankles with 2 or 3 bites one after the other. The stings are felt immediately and can ache for up to a week.
The bite area has a single puncture point in the center. Bites often appear in clusters or small rows.
Fleas can spread quickly and move between various parts of the body, including eyebrows, eyelashes, and pubic regions.
Hair loss due to itching is common, especially in wild and domestic animals. Cases of anemia can occur under conditions of high infestation.
This species, however, bites, in addition to humans, many species of mammals and birds, including domestic ones. It has been found on wild dogs and canids, captive monkeys, possums, domestic cats, captive wild felids, chickens, rats, wild rodents, pigs, bats and other species. It can also be an intermediate host of the dog tapeworm (Dipylidium caninum Linnaeus 1758).
Furthermore, these insects can be vectors of many diseases, such as plague, and can transmit parasitic worms.
Plague, a disease that affects humans and other mammals, is caused by the bacterium Yersinia pestis. Without prompt treatment, the disease can cause serious illness or death. Today, human plague infections continue to occur in the western United States, but there are far more cases in parts of Africa and Asia.
People in close contact with pneumonic plague patients should be placed under observation. Preventive antibiotic therapy may also be given, depending on the type and timing of personal contact.
The treatments to remove and eliminate Pulex irritans consist of shaving the body and the use of medicated shampoos and combing. When taking flea interventions, it is important to treat both the host and the environment. Pets should also be treated to avoid getting infested. Carpets and other floor surfaces should be shampooed and vacuumed regularly to prevent fleas. When dealing with an infestation, bedding and clothing, which may have been exposed, should be washed thoroughly in hot water and kept away from other materials that have not been exposed. In extreme cases, disinfestation action by specialized companies is required.
In the West, normally, Pulex irritans can be defined as at risk of extinction thanks to the progress of hygienic standards; we find it only in agricultural areas in the presence of pig farms. It is also known that different species of fleas can coexist on the same animal (including humans) when it is particularly infested.