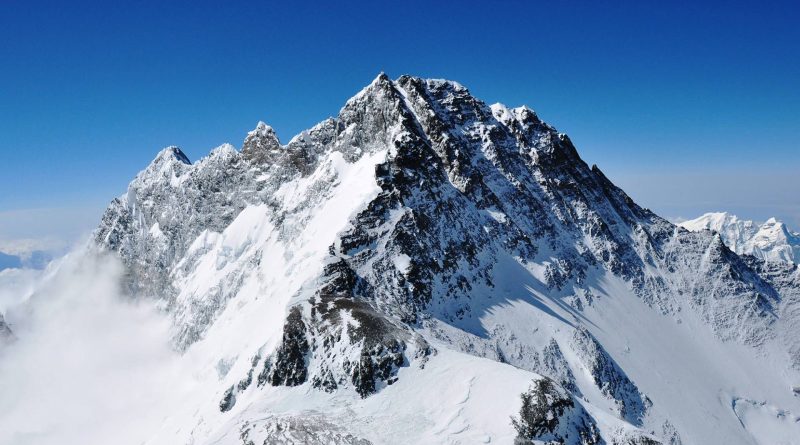 Lhotse is a mountain located in the Himalayas with a height of 8,516 m a.s.l., which makes it the fourth highest mountain on Earth.
Lhotse is made up of three peaks and is directly connected to Everest via the South Col (7,906m); in fact, in addition to the main peak there are two other secondary peaks: Lhotse Mig (East), 8,414 m and Lhotse Shar, 8,383 m.
Lhotse is indicated by the cartographic service of India with the initials E1, as the mountain does not seem to have an official name in either Tibetan or Nepalese. In August 1921, Howard Bury, not finding a local name that defined the mountain, proposed Lhotse, which in Tibetan means south peak, as its summit is located south of Everest and is joined to it by the South Col.
Mount Lhotse is the fourth highest peak on earth after Mount Everest, K2 and Kanchenjunga and the third highest peak in Nepal after Sagarmatha and Kanchenjunga. Lhotse is a climb that follows the Everest climbing route. In addition, mountaineers are interested in climbing all the eight thousand peaks found in Nepal.

History of Mount Lhotse –
The first attempt on Lhotse was on the 1955 Himalayan International Expedition, led by Norman Dyhrenfurth and their team, but the main peak of Lhotse was first climbed on May 18, 1956 by the Swiss team of Ernst Reiss and Fritz Luchsinger from Mount Everest . The expedition also made several short films on local cultural topics and made a series of first ascents of smaller peaks in the Khumbu region.
As of December 2008, 371 climbers had reached the summit of Lhotse while 20 died during their attempt. Lhotse was not reached in 2014, 2015 or 2016 due to a series of accidents, however it was reached again in May 2017. In 2016 Ang Furba Sherpa died from a fall while working up the mountain to secure the rope.
The standard Lhotse climbing route follows the same route as the South Col Everest route up to the Yellow Band beyond Camp 3. After the Yellow Band, the routes split with climbers heading to Everest taking the Spur to the left from Geneva to the South Col, while Lhotse climbers take a higher right on the Lhotse face. The last part towards the summit leads through the narrow “Reiss couloir” until reaching the main summit of Lhotse.

Flora –
As this peak is located in the same region as Mount Everest, we rarely found trees and animals. The forest is filled with birch, juniper, pine, fir, bamboo and rhododendron, while high altitude plant life is limited to lichens and mosses. Plants stop growing above the altitude of 5750m as this is the permanent snow line of the Himalayas.

Fauna –
Animals found in this region have the ability to adapt to the cold climate of reason. Wildlife such as snow leopard, musk deer, wild yak, Himalayan black bear, mountain fix etc. they manage to live there for this reason. Yak, buffalo, goat, pig etc. are some animals that are used for agriculture by the people of this region. The region is also home to numerous varieties of birds and other reptiles. This region surprises us with several beautiful flora and fauna despite its different geographical distribution and climatic conditions.