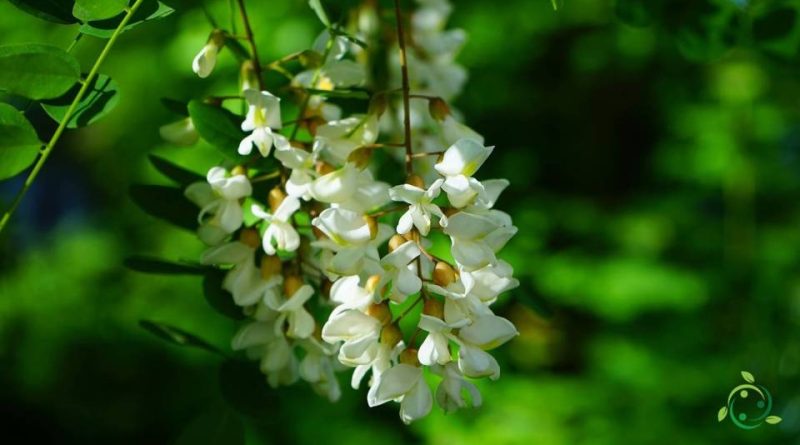 Black locust (Robinia pseudoacacia L.) is a plant of the Fabaceae family native to the Allegheny Mountains region of the central-eastern United States and naturalized in Europe and other continents.
This plant is typical of mixed deciduous mesophilic woods. Introduced in Europe, it has given rise to different ecotypes capable of colonizing from the cool-humid environments of the oceanic climate to the hot-arid ones of the Mediterranean climate.
The plant was introduced in Paris in the early seventeenth century and remained a curiosity for gardens and collectors until the last twenty years of the nineteenth century, when it was used to consolidate the landslide embankments along the new railways.
Robinia has white flowers, very fragrant, which appear in May collected in numerous pendulous racemes up to 25 cm long. The fruit is a blackish, flattened legume, 5-10 cm long, persistent on the tree until late winter, with small dark brown seeds.

Cultivation –
For the cultivation of Black locust it must be taken into account that it is a plant that, although preferring bright and warm places, develops well even in shady coastal areas, even with strong winds and a harsh climate.
From the pedological point of view it needs a deep and well-drained soil. The planting is carried out by digging holes the double size of the pot, where it is sold, taking care not to damage the earthen bread.
As for the water requirement, the plant should be irrigated only in periods of prolonged drought as it is satisfied with the rains.
Fertilization must be done at the plant with organic fertilizer and then every 2-3 years in the autumn – winter period.
Propagation is by seed, with spontaneous dissemination or by separation of the basal suckers. The seeds collected in autumn should be sown in spring. The suckers taken from the mother plant must be rooted in a mixture of sand and peat in equal parts. Once rooting has taken place, the new seedlings must be raised in single containers for at least 2 years.
Black locust is a plant that, being fast-growing, should be pruned at least every 2 years to give harmony to the foliage or to raise it as a dense bush.
In forestry it is governed by coppice, as it quickly creates stable populations. Given its very fast spread since the 1900s, there are those who speak of a weed, in some areas it has completely replaced the native species. The root system with the nitrogen – fixing action also performs an action of soil improvement and generally creates a very dense undergrowth.
On the other hand, as mentioned, the black locust often behaves as an invasive species. An example of this are vast areas of the Po Valley, where it has often replaced the native poplars and willows that grew along the banks of rivers. As mentioned, the black locust woods prevent the growth inside them of many types of flora and fungi of the undergrowth, which would instead grow in forests made up of other native trees such as oaks, beeches, chestnuts, etc. They can therefore lead to a decrease in biodiversity.

Uses –
Robinia pseudoacacia was used in the past for the consolidation of the slopes, so much so that it is now a very widespread species. In addition to providing excellent wood for coal and construction, it was used for the division of fields and along the canals and water meadows.
This species has been used for the protection of landslides, along railway embankments and in unstable escarpments, due to its fast growth and its highly developed root system, characteristics that allow it to quickly stabilize the slopes, preventing them from collapsing.
Wood is used which is yellow in color, with distinct rings, hard and heavy (Specific weight 0.75). Due to these characteristics it can effectively replace tropical woods in use, with advantages for the trade balance; the use of locust wood instead of exotic essences also allows to slow down the deforestation of tropical areas. For these reasons, some Italian regions have financed projects for the enhancement of black locust wood crops, obtaining contributions from the European Union. The wood is used for heavy carpentry work, for mine struts, for poles (the logs left in water for a few months in autumn and winter acquire a particular tenacity), for outdoor furniture and for parquet. In Lombardy it appears to be the most cut species in the woods.
Wood is also an excellent fuel: unseasoned wood and twigs (the latter in bread ovens) can also be used.
The flowers are edible. In the countryside of Veneto, in the Savona hinterland, Tuscany and other regions, they are in fact eaten fried in sweet batter and give the pancake a sweet aroma and a particularly exquisite flavor. However, the rest of the plant (stems and leaves) contains a substance that is toxic to humans. Its toxicity on the other hand is not universal and some animals eat it. Goats are fond of it and consume it in quantity without any negative consequences.