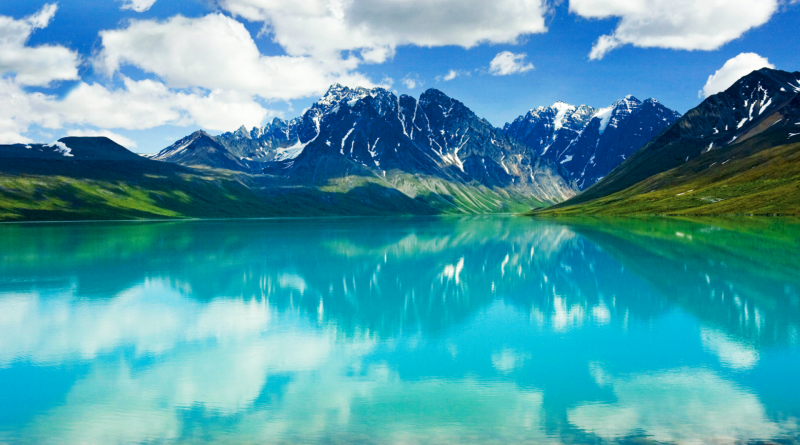 Lake Clark National Park and Preserve, whose WDPA Code is: 1012, is a national park located in Alaska, in the United States of America.
This park has a land area of ​​10,601.66 km² and is managed, like other parks in the United States, by the National Park Service.
Lake Clark National Park and Preserve was first proclaimed a national monument in 1978, then established as a national park and reserve in 1980 by the Alaska National Interest Lands Conservation Act.
The park includes many streams and lakes vital to salmon fishing in Bristol Bay, including its namesake Lake Clark.
The park was established to protect the rainforests along the Cook Inlet coast, alpine tundra, glaciers, glacial lakes, major salmon-rich rivers and two volcanoes, Mount Redoubt and Mount Iliamna. Mount Redoubt is active, erupting in 1989 and 2009. The wide variety of ecosystems in the park means that virtually all of Alaska’s major land and marine animals can be seen in and around the park. Salmon, especially sockeye salmon, plays an important role in the ecosystem and the local economy. Large populations of brown bears are attracted to feed on the salmon breeding in the Kijik River and Silver Salmon Creek. Bear watching is a common activity in the park.
Lake Clark National Park and Preserve can only be reached by boat or small aircraft, typically seaplanes. The main inhabited area in the park and reserve is Port Alsworth on Lake Clark. Five other settlements are close to the park, populated mainly by native Dena’ina. Before the park was established, isolated huts were scattered around the region, the best known belonging to Richard Proenneke, whose films documenting his lonely life in Twin Lakes were made into Alone in the Wilderness in 2003.
While both sport and subsistence hunting are permitted in national reserves, only subsistence hunting by local residents is permitted within the national park.

Geography –
Lake Clark National Park and Preserve is located at the base of the Alaska Peninsula in south-central Alaska, approximately 100 miles southwest of Anchorage. Of the total area, approximately 1,067,000 Ha are in the park and 570,000 Ha in the reserve. The park and associated national reserve stretch from the Cook Inlet through the Chigmit Mountains and the Neacola Mountains at the northern end of the Aleutian Range to within Alaska. Lake Clark is the largest lake in the park, in the southwest corner of the park. National reserve lands border park lands to the west, offering both subsistence and sport hunting, in contrast to parks, where only subsistence hunting is allowed by local residents. The far southwestern section of the reserve includes Alaskan Native Guild lands, which are not open to the public. Most of the park section is designated wilderness. The eastern part of the park near the Cook Inlet includes two active volcanoes, Mount Redoubt and Mount Iliamna. A third, Mount Spurr, is just outside the park to the east. The main river in the park is the Kvichak River. Another large river, the Tlikakila River, flows through the park from its source at Summit Lake to Lake Clark, emerging from the lake and park as the Newhalen River.
The main inhabited place in the park is Port Alsworth on Lake Clark, with a Park Service visitor center and a number of privately run lodges. Air taxis make regular journeys between Port Alsworth and the outer communities. Other private lodges are scattered around the park.

Geology –
Lake Clark National Park and Preserve is characterized by four main physiographic regions. The rising Chigmit Granite Mountains connect the Alaska Range to the Aleutian Range. Overlapping these mountains and just east of the main range are the two stratovolcanoes, Redoubt, with 3,108 m high and Iliamna with 3,053 m. Glaciers have altered the mountains, carving U-shaped cirques and valleys into the range, which abruptly terminate east on the steep coast in deep bays or tidal expanses. To the west, glaciers have cut deeply enough to create lakes, embanked by terminal moraines at the downstream ends. Lake Clark, the largest, is the sixth largest lake in Alaska, 260m deep and 68km long).
The Lake Clark National Park and Preserve encompasses a variety of unrelated rocks. The core of the Chigmit Mountains is a granite pluto pushed up by the collision between the Pacific plate and the North American plate. The rocks in the coastal areas are of sedimentary origin and contain abundant fossils. Volcanic rocks intrude through these native rocks. 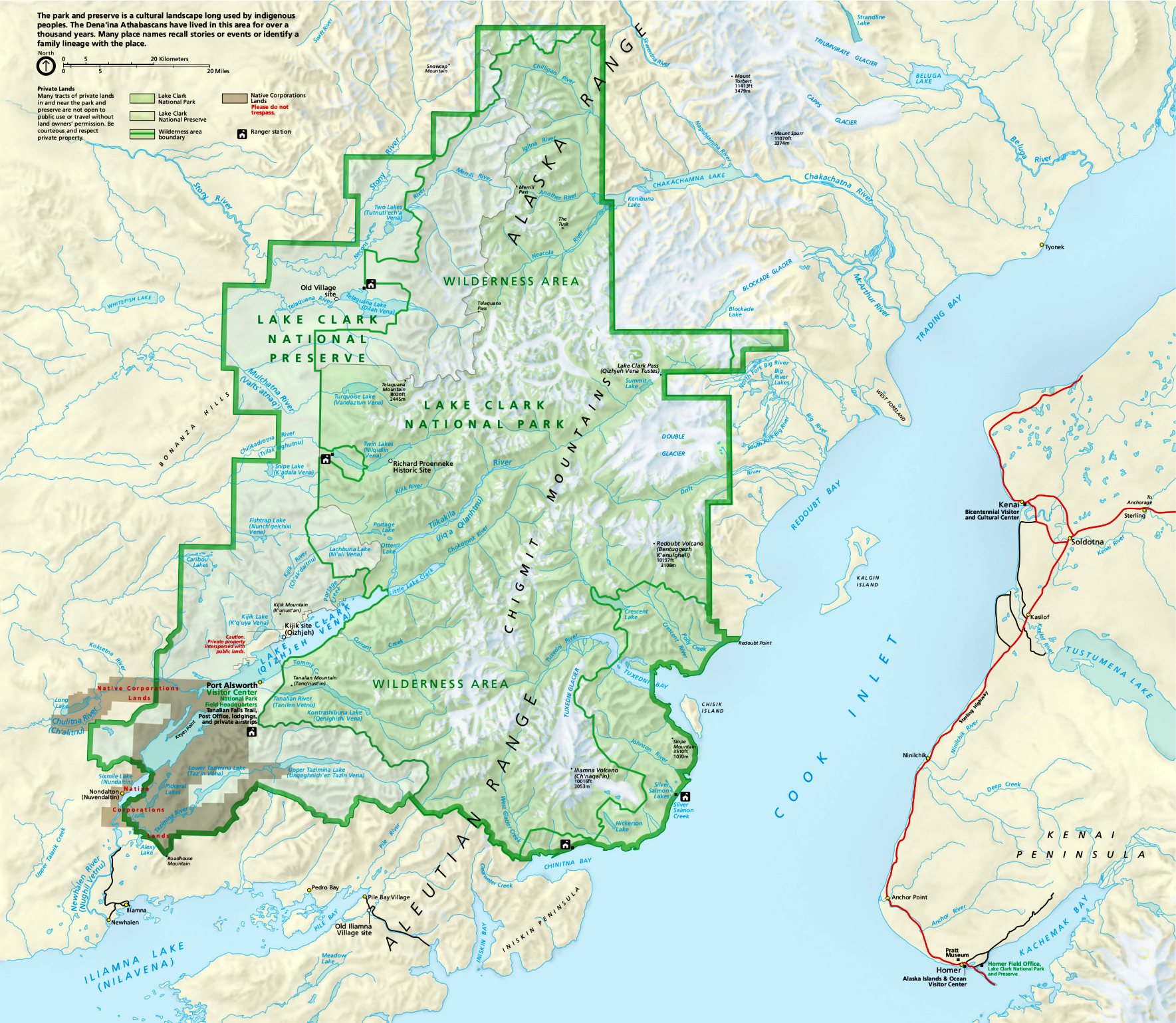 Climate –
According to the Köppen climate classification system, Lake Clark National Park and Preserve has a subarctic climate (Dfc) with cool summers and year-round rainfall. DFC climates are defined by their coldest month with an average below 0 ° C, 1-3 months with an average above 10 ° C, all months with average temperatures below 22 ° C and no significant difference in precipitation between seasons. According to the United States Department of Agriculture, the plant hardiness zone at Dick Proenneke’s cabin on Twin Lakes at 606m high is 2b with an average annual minimum temperature of -41.7 ° C.

Flora –
Lake Clark preserves a wide variety of Alaskan landscapes and ecosystems, corresponding to its four main physiographic areas. The coastal sections that run along the Cook Inlet from Tuxedni Bay to Chinitna Bay include the coast and marine ecosystems. The mountains of Alaska, the Aleutians and the Chigmit Ranges with their glaciers form a second region. On both sides of the mountains the valley, the lake and the foothills have a landscape altered by glaciers.
The boreal forest dominates the lower sections of the southwestern part of the park, with black and white fir trees making up the majority of the conifers. The silver fir was affected by a spruce bark beetle infestation, and the spruce needle rust outbreaks were so intense that the surface of Lake Clark was colored orange by the spores. Further north and west are the tundra regions, mainly the result of elevation. The tundra supports caribou and ptarmigan.

Fauna –
The salt flats along the Cook Inlet represent one of the most productive ecosystems in the park. They make up less than 1% of the park’s area, but provide a food source in early summer for both brown and black bears. The coastal areas of Lake Clark are ranked as some of the best destinations in the world to watch bears, along with the coast of Katmai National Park. Most bears are concentrated in Chinitna Bay or Silver Salmon Creek when the fish are running. Chinitna Bay is considered by some to be one of the best bear-watching destinations in Alaska. Tuxedni Bay, north of Chinitna Bay, also offers excellent bear watching; Up to 20 brown bears have been sighted feeding on clams and sedges at a time. Crescent Lake offers excellent bear watching in June, July, and August. Both grizzly bears and black bears are present, but grizzly bears are more common and seen more often, as black bears are more shy and are easily moved by their larger cousins. Across the park, the Kvichak River is the world’s most productive watershed for sockeye salmon, whose offspring account for 33% of the species’ catch in the United States and 16% of world production. Salmon are so abundant that a pack of wolves at Lake Clark has been documented as the only salmon-dependent pack in the world.
In Lake Clark National Park and Preserve, major raptors and land mammals include the bald eagle, golden eagle, Dall’s sheep, moose, caribou, peregrine falcon, and wood wolf. The smallest mammals are coyotes, martens, arctic and red foxes, wolverines, river otters, beavers, and Canadian lynxes. Among the marine mammals we have sea lions, beluga whales, seals and porpoises. In the park there are both black and brown bear species. Black bears use all areas of the park and conserve, with the exception of the higher elevations. Brown bears are more numerous along the coast. A recent survey found that around 219 bears graze in sandbanks during the summer in the coastal areas of the park. Caribou have recently declined in population from 200,000 to 30,000 due to an unknown cause.