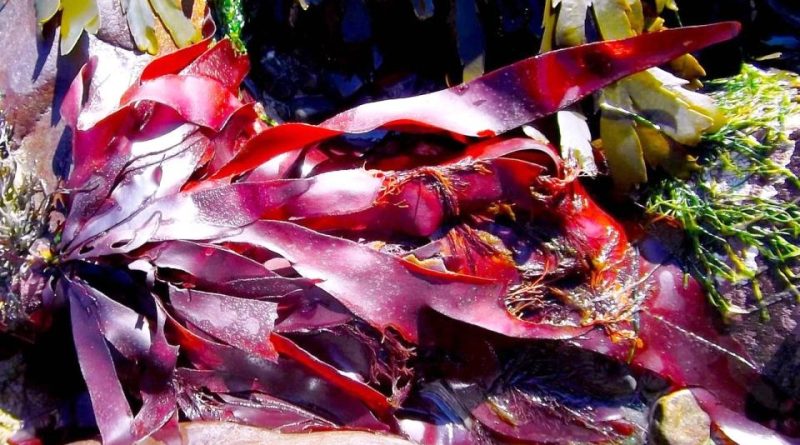 Geographic Distribution and Habitat –
Palmaria palmata is a red alga with an area that is included between the northern coasts of the Atlantic oceans, especially on the coasts of Finistère in Brittany, Ireland, Scotland and Scandinavia, in the Pacific (Japan), in the Bay of Fundy and between New Brunswick and Maine. 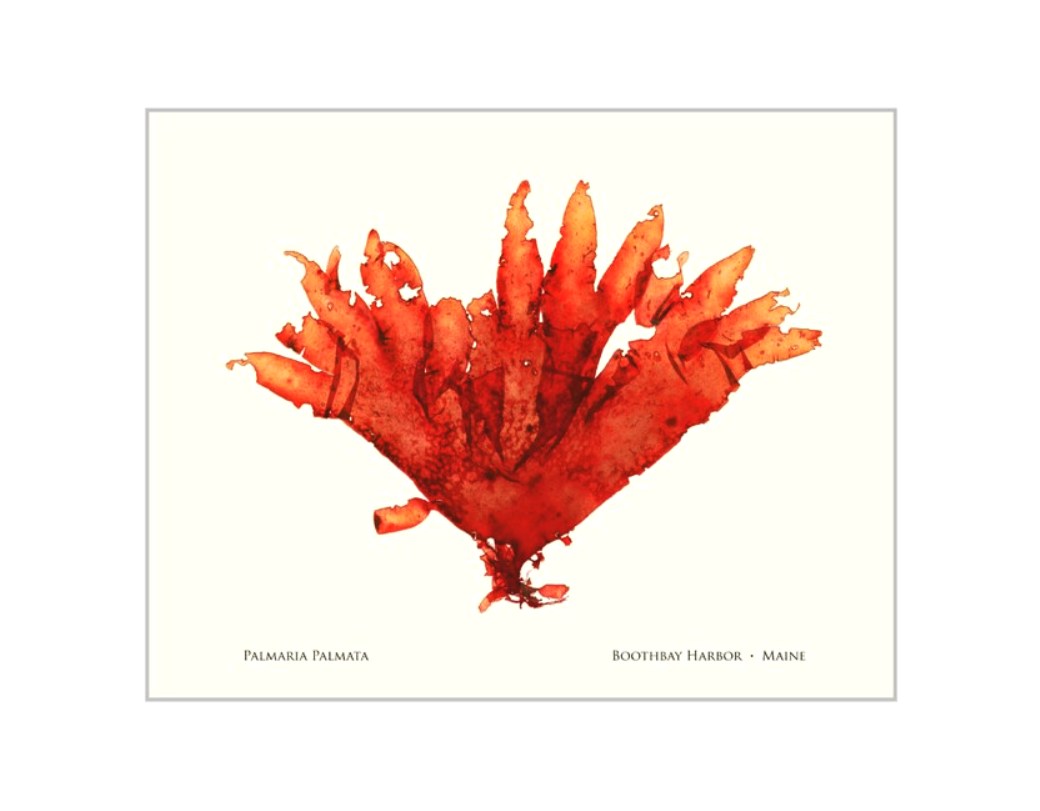 Description –
Palmaria palmata is a red alga that grows in tufts and abundantly in the shallow water along the rocky coasts, where the waters are rough.
It is a small alga with a thallus 15 to 30 cm high and flat, smooth and soft fronds, which open like the fingers of a hand.
The fronds grow attached with their discoid socket and short, inconspicuous stem epiphytically to the stem of Laminaria or to the rocks.
The fronds vary in shape and color, from deep pink to reddish purple, and are rather leathery in consistency.
The leaf lamina is flat and gradually expands and divides into large segments of varying sizes up to 50cm in length and 3-8cm in width which may have flat wedge-shaped proliferations from the edge.
The lamina consists of an outer cortex of small cells that encloses a medulla of larger cells up to 0.35 in thickness.

Cultivation –
Dulse is an alga that is harvested by hand between May and October at low tide, the algae are then dried in the sun and in the wind, selected and packaged for sale.
In general, depending on its climatic habitat, it can be found from June to September. Once harvested, small snails, shell pieces and other small particles can be washed or shaken off the plant, which is then spread out to dry. Some pickers may roll them into large bales for later packing.

Customs and Traditions –
Palmaria palmata, among the algae native to the North Atlantic, is the best known and most appreciated and has been consumed for many years by the population of north-western Europe.
His name is dulse or dillisk in English and creathnach in Irish Gaelic. It is said that the ancient Celtic and Nordic warriors chewed the seaweed during the marches and that the monks of Saint Columba collected it to feed the poor about 1400 years ago.
The populations of Iceland (where it is known as söl) and Alaska have also included seaweed in their diet for many centuries.
In Ireland it can be used to make “White Soda Bread”.
In Ballycastle, Northern Ireland, it is traditionally sold at the Ould Lammas Fair. It is especially popular along the Causeway Coast. Along the Ulster coast from County Down to County Donegal, it is eaten dry and raw as a snack.
In the seventeenth century it was used by English sailors as a kind of chewing tobacco and it was noted that this helped to decrease the incidence of frequent scurvy in British seamen less affected than others of different nationalities. In the eighteenth century Scottish and Irish immigrants popularized the seaweed in the areas along the coasts of Canada and New England and until the end of the nineteenth century Palmaria was traded in the roads along the ports of both sides of the Atlantic but, as for almost all algae in the West, its use has declined, although recently with the emergence of a trend towards a vegetarian or vegan diet, local harvesting industries have given a new impetus to its trade.
This seaweed can be found in many natural food stores or fish markets and can be ordered directly from local distributors. It is also used as animal feed in some countries.
This seaweed is a good source of minerals and vitamins compared to other vegetables, contains all the trace elements needed by humans and has a high protein content.
Palmaria palmata is an algae that has an ideal balance of nutrients, including vitamin C, the amino acid lysine, iron, potassium, magnesium, phosphorus, iodine. It can be considered a “digestive” algae if taken after meals. The particular combination of vitamins, mineral salts and amino acids makes it an ideal tool against stress. After the seaweed Porphyra umbilicalis (nori) it is the one with the highest protein content. Due to its high salt content, it can be considered an effective and excellent natural “supplement” to be taken after sports for hydro-saline rebalancing.
From a nutritional point of view, it is an algae rich in proteins, vitamins A and C, iron, zinc and calcium. There is no shortage of potassium, sodium and natural iodine.
Interesting is the particular composition of Lysine, which is an essential amino acid scarcely present in plant forms. It is used to promote gastric and digestive functions. In association with vitamin C it is able to limit the proliferation of the Herpes simplex virus.
This is why it is an excellent food supplement and is good for the thyroid, as well as being indicated in cases of anemia.
100gr of seaweed contain: 18% protein; potassium 7310 mg (208% QGR); Calcium 560 mg (116% QGR); Magnesium 610 mg (203% QGR); Phosphorus 235 mg (54% QGR); Iron 50 mg (357% QGR); Provitamin B12 0.9 mg (90% QGR); Vitamin C 34.5 mg (57.5% QGR).
Among the contraindications, however, it should be remembered that its intake should be avoided during pregnancy and breastfeeding; in case of metabolic disturbances, consult your doctor first. Overdosing can also cause thyroid dysfunction, tremors, irritability, tachycardia, insomnia and arterial hypertension.

Preparation Method –
Dulse is a soft seaweed with a distinctive and decisive taste, almost spicy. It is used for the preparation of soups, soups and condiments, but also appetizers, omelettes, quiches, fish dishes and sauces. Cooked briefly, it combines very well with onions and makes a tasty accompaniment to oat or cereal dishes.
It can be quickly fried in a pan, baked and covered with cheese, with sauce or simply heated briefly in the microwave. It can be used in soups, sandwiches and salads or added to bread or pizza dough. Finely diced, it can be used as a flavor enhancer in meat dishes, such as chilli, to replace monosodium glutamate.
After a short soaking it can be added to salads. Dulse seaweed can be found in oriental products stores, herbalist’s shops and organic food stores, it is marketed in various forms: dried, flakes, tablets and powder.
It is a soft seaweed with a very particular “spicy” taste, one of a kind. Its fairly consistent but very tender leaf makes the seaweed particularly versatile and suitable for a thousand occasions to be experimented with in countless recipes. Dulse seaweed can contain small shells and therefore needs careful cleaning before use.
Fresh seaweed can be consumed directly from the rocks before drying in the sun.
The one dried in the sun is consumed as it is or ground into flakes or powder. When used in cooking, the properties of Dulse seaweed are similar to those of a flavor enhancer.

One thought on “Palmaria palmata”