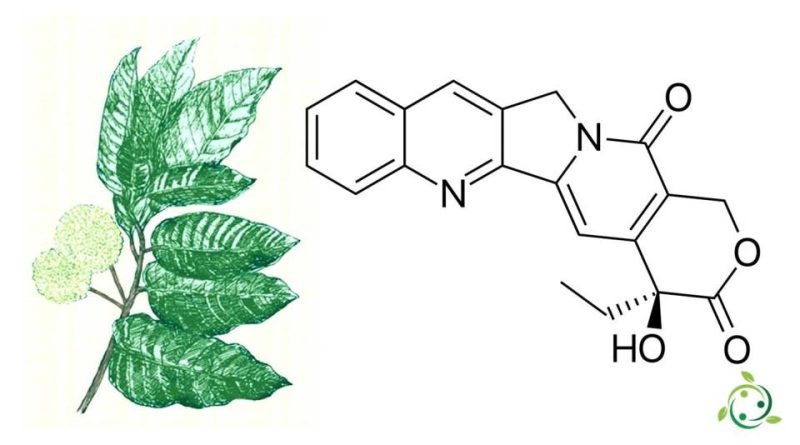 Camptothecin (abbreviated with the term CPT) and whose name in the official IUPAC nomenclature is: (S) -4-ethyl-4-hydroxy-1H-pyran [3 ‘, 4’: 6,7] indolizino [1,2- b] quinoline-3,14- (4H, 12H) -dione, quinoline alkaloid with brute or molecular formula: C20H16N2O4.
Chemically, camptothecin has a planar pentacyclic ring structure, which includes a pyrrole [3,4-β] -quinoline moiety (rings A, B and C), a conjugated pyridone moiety (ring D) and a chiral center in position 20 inside the alpha-hydroxy lactone ring with configuration (S) (the E-ring).
Camptothecin occurs naturally and derives from the bark of the Camptotheca acuminata plant (Camptotheca acuminata Decne., 1873), a tree native to China used in traditional Chinese medicine. Camptothecin has, however, also been found in other plants, including Chonemorpha fragrans (Chonemorpha fragrans (Moon) Alston).
Camptothecin was discovered in 1966 by M. E. Wall and M. C. Wani in the systematic screening of natural products for anticancer drugs. It was first isolated from the bark and stem of Camptotheca acuminata and has been used clinically more recently in China for the treatment of gastrointestinal cancers.
In Phytomedicine in 2017 it is also reported that this substance is also produced by four bacterial endophytes and the possible role of a plasmid in the biosynthesis of this active metabolite is also highlighted.
Specifically, the isolated responsible bacteria belong to the Bacillus sp. (KP125955 and KP125956), Bacillus subtilis (KY741853) and Bacillus amyloliqufacens (KY741854). Using techniques such as ESI-MS / MS and NMR analyzes, the molecules produced by these microorganisms were compared with those produced in nature and the identity of camptothecin was similar. In fact, camptothecin was found to be biologically active due to the positivity of the cytotoxicity tests related to the colon cancer cell line. This is an excellent result in the oncology field as it allows to expand the production of molecules associated with anticancer activity.
Regarding the probable role of a plasmid in the production of camptothecin, by isolating a plasmid from the culture of the aforementioned bacteria, a variation in the production of the active metabolite was detected, so the study opens further horizons to reveal the exact mechanisms that could be involved in the process. of bacterium-associated synthesis.

Camptothecin has shown anticancer activity in preliminary clinical studies, particularly against breast, ovarian, colon, lung and stomach cancers, however, it has low solubility and adverse effects have been reported when used therapeutically, therefore Synthetic chemicals and medicines have developed numerous syntheses of camptothecin and various derivatives to increase the benefits of the chemical, with good results. Four CPT analogs have been approved and are now used in anticancer chemotherapy; these are: topotecan, irinotecan, belotecan and trastuzumab deruxtecan.
Therefore, powerful inhibitory activities of eukaryotic topoisomerase I are associated with camptothecin, for which reason the researchers have long since undertaken biological studies relating to this molecule and have obtained satisfactory results in the oncological field. To date, the great potential of camptothecin as an antitumor substance is proven and the active components responsible for this activity are precisely the alkaloids with an unsaturated pentacyclic structure, or the indole alkaloids.
Camptothecin has a unique mechanism of action among natural anti-tumor agents: topoisomerase I is an enzyme that is involved in many processes involving DNA such as its replication, transcription and recombination. More specifically, the inhibition capacity is given by the formation of the DNA-drug-topoisomerase complex.
However, such a process does not exclusively concern the blocking of the proliferation of cancer cells, in fact it has been shown to be effective in vitro relating to the inhibition of the viability of Trypanosoma and other microorganisms responsible for malaria. By overcoming the problems concerning the low bioavailability of this drug and its poor solubility, by designing better synthetic analogues, this molecule seems promising in the treatment of breast, ovarian and stomach cancers.