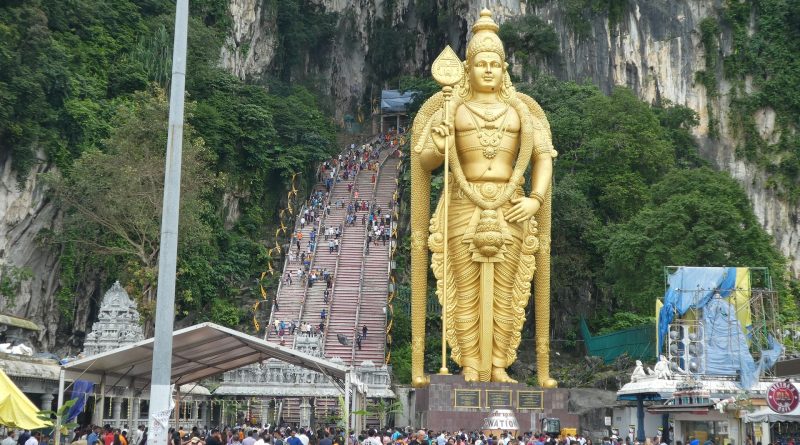 Malaysia (or Malaisia) is a federal state in Southeast Asia with a population of just over 32 million inhabitants on an area of ​​approximately 330,000 km²
The capital of Malaysia is Kuala Lumpur with 1,809,699 inhabitants (as of 2009).
Malaysia almost completely overlooks the South China Sea, a tributary of the Indian Ocean and geographically consists of a continental part, which occupies the south-eastern end of the Malay Peninsula or Malacca, and is administratively corresponding to most of the federated states of the union, among which Johor, Negeri Sembilan, Selangor, Putrajaya and the capital Kuala Lumpur; and an island, located in the northern region of Borneo which includes the federated states of Sarawak, Sabah and Labuan, the latter island off the coast of Brunei.
The continental part of Malaysia borders Thailand to the north, while that on Borneo borders Indonesia to the south. The territory of Malaysia includes that of the Sultanate of Brunei completely. Furthermore, at the southern end of Malacca is the city-state of Singapore which has no land border with Malaysia, but is connected to it by a bridge.

Geography –
West Malaysia, which extends on the southern tip of the Malacca peninsula, is washed to the west by the waters of the Strait of Malacca and to the east by the South China Sea, and is bordered to the north by Thailand and to the south by Singapore; East Malaysia, which occupies the northern sector of the island of Borneo, borders Indonesia to the south and Brunei to the north. The Malaysian sector of the Malacca peninsula has a central framework made up of discontinuous mountain and tabular formations, elongated in the north-west to south-east direction, which connect to the Indochinese range and have their origin in the Himalayan corrugation.
From the morphological point of view, the average altitude varies from 1000 to 2000 meters; the highest peak is to the north, where Gunung Tahan reaches 2190 meters. Vast sedimentary plains flank the system to the west and south, while to the east the reliefs often reach the coast and fragment a small flat belt in the northern sector. The rivers are numerous and very rich in water on both sides of the range: the most important are the Kelantan, the Pahang, the Belum and the Muar. The coasts are generally low and uniform, sometimes sandy and marshy and fronted by a series of islands, islets and coral reefs. The territory of East Malaysia faces the China Sea to the west, the Sulu Sea to the north-east and the Celebes Sea to the east. Its border with the Indonesian part of the island is marked by the high peaks of the mountain ranges of the Kapuas Hulu, Iran and Penambo.
In this country there is no shortage of waterways among which are remembered: the Rajang and the Kinabatangan. The coasts are mainly low and sandy along the western sector, to become higher and more indented in the north-eastern one. 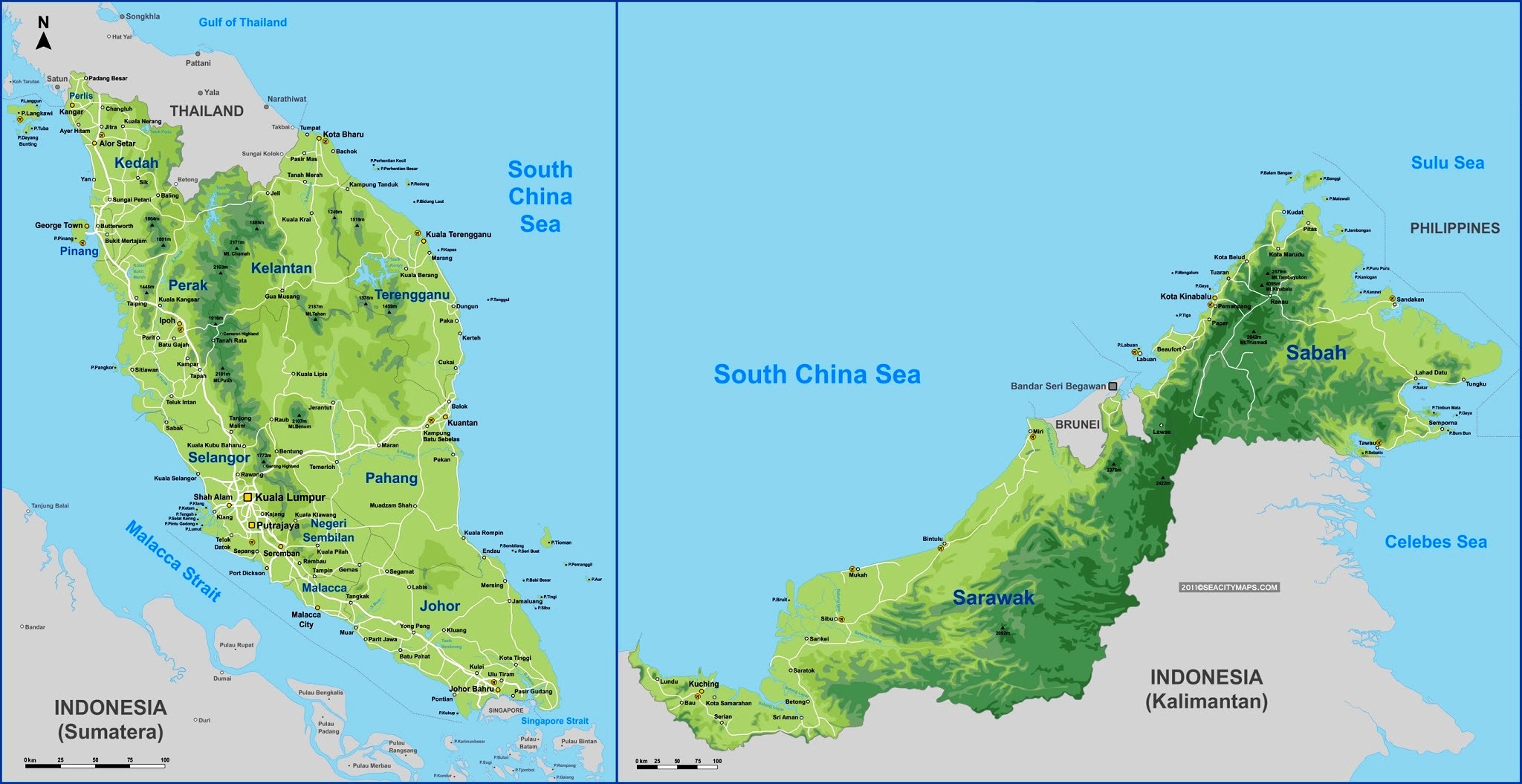 Climate –
Malaysia is a country characterized by an equatorial climate, with high temperatures, very low annual temperature range (while daily 7 degrees normally in the whole country considering the immense equatorial forests shielding the powerful solar intensity) and abundant rainfall. The monsoon influence is not very pronounced, but in any case it causes an increase in rains on the east coast from November to February, while on the west coast only the month of August is very rainy with intense and prolonged showers. The rain tends to fall in the late afternoon and in the evening, often violently, with the formation of thunderstorms.
Borneo is always a bit wetter than the rest of the country.
In Malaysia, the average annual temperature across the country (between the minimum: 24.5 ° C, and the maximum: 31.5 ° C) tends to be no lower than 28 ° C (up to 100 m asl) and rainfall, except in exceptional cases, they do not fall in any place on the whole surface of the country below 2000 mm per year. The annual relative humidity is usually not less than 80% (up to 85% for the most rainy and / or marshy areas) remaining relatively constant over the hours, 95% max – 65% min. Due to the high humidity which does not favor an optimal transpiration of the organism, the temperatures perceived by the human skin in the central hours of the day can often reach, for a duration of a few hours, 41-42 or 43 degrees (but in exceptional cases almost always in metropolises or in any case in a city environment, temperatures are perceived up to 48-49 or 50 degrees, for a few hours) making the climate totally inadvisable to undertake explorations or trips, in which prolonged movement is often necessary which it would tire the organism in maintaining this epidermal perception of over 40 degrees, favoring instead an effective gradual increase in the real internal body temperature.

Flora –
In Malaysia, tropical conditions and vast rainforests have led to an enormous diversity of plant and animal species.
For this reason, some protected areas and natural parks have been established in Malaysia, among which we mention:
– Kinabalu Park;
– Gunung Mulu National Park;
– Taman Negara National Park;
– Niah National Park.
The floristic surveys have identified that there are 8,000 species of flowering plants which include 2,000 species of trees, 800 types of orchids and 200 types of palm trees.
The original plant mantle, consisting mainly of the equatorial forest, covers most of the territorial surface: in addition to the characteristic formations of lianas, the floral plant Brownlowia velutina, sandalwood, teak, cinnamon tree, ebony, bamboo, the camphor tree and the rubber tree. Palm trees (intensive cultivation of oil palm) are widespread throughout the territory. Along the coasts the mangroves.
A well-known plant found only in Southeast Asia is Rafflesia. This plant is found only in the rainforests of Sumatra and Borneo. It is the plant with the largest flower in the world, and can reach a weight of 10 kg. This plant is the symbol of the Sabah province on the island of Borneo, although it has a strong smell of rotting meat.
It is also impossible to discover Malaysia without tasting its many varieties of fruit. You can take advantage to make a diet based on strawberries, watermelons, bananas, mangoes, papaya, pineapples and coconuts and, in addition, you can taste the typical exotic fruits such as chikoo, kundang, rambai, bulait, salak, durian, famous for its peculiar smell of cheese, duku, jambu, ramboutan, mangka or carambola.

Fauna –
Malaysia, in addition to hosting more than 200 species of mammals, 600 different varieties of birds, 140 species of snakes, 80 types of lizards, 300 species of freshwater fish and thousands of insects that live in the rainforest is a country with an almost unique fauna biodiversity.
It is possible to spot rare animal species on the journey through Malaysia. For example, elephants, orangutans, tigers, panthers, monkeys, rhinos, Malay bears, crocodiles and tapirs live in Malaysia.
Also in the inhabited areas often different animal species are encountered.
Borneo is also well known for its vast jungles. Especially in the area around Sukau you can enjoy beautiful river tours. Aquatic animals can be spotted on the river bank. You can meet elephants, crocodiles and perhaps even orangutans.
In general, the characteristic fauna of West Malaysia includes tigers, rhinos, elephants, buffaloes, bears, crocodiles, turtles, snakes, eagles, pheasants, water birds and the salangane. In East Malaysia, orangutans, gibbons, tapirs, royal tigers, panthers, Malay bears, wild boars, toucans, and salangane reign. There are innumerable species of insects, just as the fish fauna is rich in species and individuals. There are no tigers in eastern Malaysia, at the same time there is the elephant of Borneo.
In recent years, the World Wide Fund for Nature has also organized a campaign here to protect the orangutan in its habitat. Due to the cutting of the wood, this animal is threatened with extinction. Now this topic is often seen on television. Only when you’ve been there for yourself, can you fully understand how sad it would be if this great ape disappeared forever.