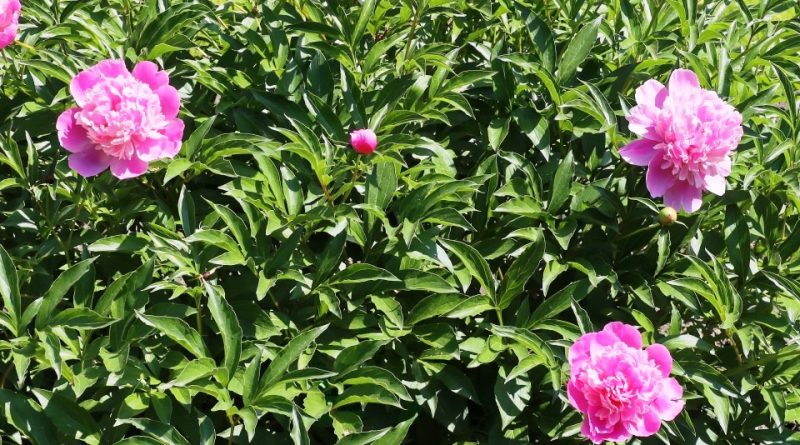 The Chinese peony (Paeonia lactiflora Pall.) Is a herbaceous species belonging to the Paeoniaceae family.

Etymology –
The term Paeonia comes from the Greek name παιωνία paionía given to him by Theophrastus in honor of Peone (Παίων Paíon), the mythical doctor of the Greek gods who was changed into flower by Pluto. Pliny the Elder also provides the same etymology.
The specific epithet lactiflora comes from lac, láctis latte and from flos, floris fiore: with milk-white flowers.

Geographic Distribution and Habitat –
Paeonia lactiflora is a perennial herbaceous plant native to central and eastern Asia, in an area ranging from eastern Tibet through northern China, to Mongolie and eastern Siberia.
Its habitat is that of open and dry stony slopes, river banks and edges of sparse woods, woods and prairies; in China it is found at altitudes between 400 and 2300 meters in China. 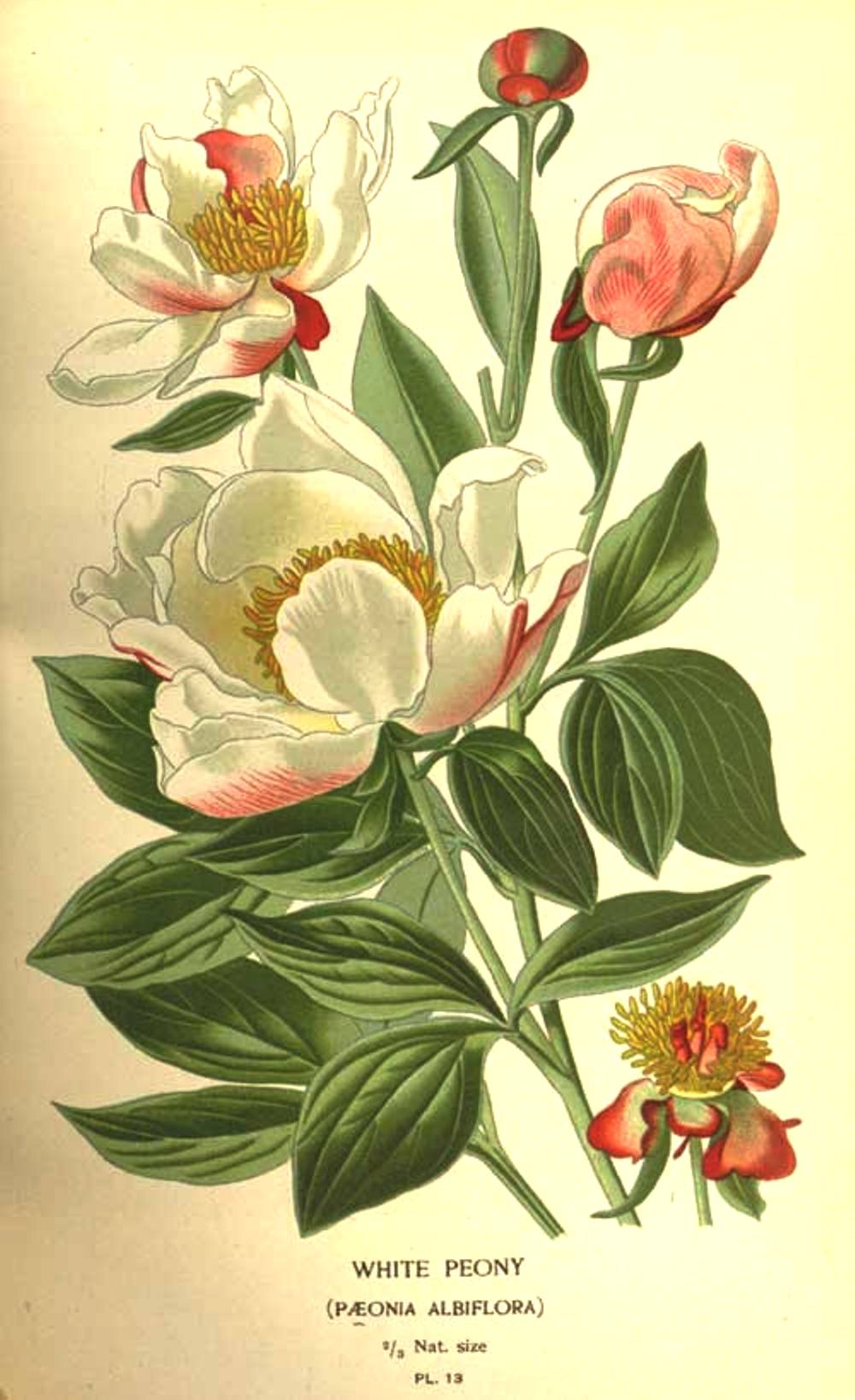 Description –
Paeonia lactiflora is a perennial herbaceous plant with a globular habit with a width and height between 50 and 70 cm.
The leaves have 9 lobes mentioned and 20-40 cm oblong in shape.
The flower buds are large and round and smell of rose; open in the shape of a cup or bowl, 8–16 cm in diameter, with 5–10 white, pink or crimson petals and yellow stamens (depending on the variety).
Flowering is in late spring (May in the Northern Hemisphere).

Cultivation –
Paeonia lactiflora is an easy to grow and undemanding plant that grows well in rich, deep soil, preferably with a neutral or slightly alkaline pH.
It prefers sunny areas, where it gives a more abundant flowering, or in light shade.
From the pedological point of view it is a plant that tolerates many types of soil but requires well-drained but not dry soils. However, plants grown on sandy soils tend to produce more leaves and fewer flowers, while those on clay soils take longer to establish but produce better blooms.
The species is resistant to about -25 ° C, but there are many varieties, some of which are resistant to even more rigid temperatures.
This plant is grown for medicinal uses in China but also as an ornamental in various parts of the world. It is in fact a very ornamental and long-lived plant, which survives in gardens for 50 years or more.
For this reason, hundreds of varieties have been created for their ornamental value.
These cultivars have been selected in a variety of colors, sizes and shapes; many have double flowers, with the stamens modified into additional petals. There are many colors available, from pure milky white, to pink, pink and almost red, along with single or fully double shapes.
The color of the petals depends on a UDP-glucose: Flavonoid 5-O-glucosyltransferase which expresses anthocyanins such as peonidin-3,5-di-O-glucoside, pelargonidin-3,5-di-O-glucoside, cyanidin-3,5 – di-O-glucoside, peonidin-3-O-glucoside, cyanidin-3-O-glucoside, peonidin-3-O-glucoside-5-O-arabinoside, cyanidin-3-O-glucoside-5-O-galactoside and pelargonidin-3-O-glucoside-5-O-galactoside.
From an ecological point of view it is a demanding plant that inhibits the growth of neighboring plants, especially legumes.
It is also strongly affected by the transplant technique, taking some time to recover. Plants should be planted with their foliage no more than 3cm below ground level. If planted deeper they don’t flower as well.
Peony species are generally self-fertile, although they also tend to hybridize with other species of the same genus if they flourish nearby.
Plants take 4-5 years to flower when planted from seed.
Propagation can take place by seed which must be sown as soon as it is ripe in an unheated pallet.
If sown while still fresh, the seed produces a root about 6 weeks after sowing with shoots already formed in spring.
The stored seeds are much slower, they should be sown as soon as possible in a cold environment, but it may take 18 months or more to germinate.
Roots are very sensitive to disturbances, so many growers allow seedlings to stay in their pots for 2 growing seasons before placing them in pots. This allows for the development of a better root system that is more resistant to disturbances.
Another way of propagating the plant is by division; practice that must be done with great care in spring or autumn. Each portion must have a leaf bud. If the raised root remains in the shade for several hours it becomes less brittle and easier to divide. Visions that have multiple buds usually bloom in the second year, but those that only have one or two buds will take a number of years before they are grown enough to bloom.

Customs and Traditions –
The genus Paeonia currently includes 35 species and Paeonia lactiflora was known as the white peony (P. albiflora) when it was first introduced to Europe. It was brought to England in the mid-18th century and is the parent of most modern varieties.
In China, this plant is compared to the “minister of flowers” (花 相), while Paeonia × suffruticosa is known as “the king of flowers” (花王).
Additionally, Paeonia lactiflora became a popular still life subject for Impressionist artists in the late 19th century.
Pierre-Auguste Renoir painted peonies in numerous paintings from 1870 to 1890. The Independent wrote of his passion for the flower that: “They were introduced to the horticultural world of Paris in 1860, so there was still something exotic about them, and Renoir painted them in a rather solemn and majestic way “.
Vincent van Gogh painted “Vase with Peonies”, “Bowl with Peonies and Roses” and “Vase with Cornflowers and Poppies, Peonies and Chrysanthemums”, all in 1886.
Claude Monet painted “Vase of Peonies” in 1882.
Édouard Manet grew peonies in his garden and painted them frequently. Impressionist artist Frédéric Bazille painted “Young Woman with Peonies” in 1870 as a tribute to his friend Manet, knowing his passion for the flower.
This peony, as well as for ornamental purposes is also used and cultivated for food and medicinal purposes.
The root is cooked and eaten in broth.
The stems are cooked and the seed, reduced to powder, is mixed with the tea.
For medicinal use, the root is used and has been used for this purpose for over 1,500 years in Chinese medicine. It is widely known as one of the herbs used to make the “soup of the four things”, a female tonic, and is also a remedy for gynecological problems and for cramps, aches and dizziness.
When using the whole root it is called Chi Shao Yao, if the bark is removed during preparation then it is called Bai Shao Yao.
The root is alterative, analgesic, anodyne, antibacterial, anti-inflammatory, antiseptic, antispasmodic, astringent, carminative, diuretic, emmenagogue, expectorant, febrifuge, hypotensive, nervine and tonic.
At the biochemical level the most important ingredient in medicine in the root is paeoniflorine, which has been shown to have a strong antispasmodic effect on the mammalian intestines, also reduces blood pressure, reduces body temperature caused by fever and protects against stress ulcers. .
Furthermore, the leaves of many cultivars are rich in oleanolic and ursolic acid.
The phenolic compounds that can be found in P. lactiflora are: Cis-epsilon-viniferin, trans-resveratrol, trans-resveratrol-4′-O-beta-D-glucopyranoside, trans-epsilon-viniferin, gnetin H and suffruticosol A, B and paeoniflorine esters.
It is taken internally in the treatment of menstrual disorders, injuries, hypertension, premenstrual tension and liver disorders.
However it should only be used under the supervision of a qualified doctor and should not be prescribed for pregnant women.
No other uses are known.

Preparation Method –
Paeonia lactiflora is a plant that is used, as well as for ornamental purposes, as mentioned, also for food and medicinal purposes.
The roots are harvested in the fall from 4 – 5 year old cultivated plants and boiled before being dried in the sun for later use.
The roots of wild plants are harvested in the spring or (preferably) in the fall and dried in the sun for later use.
The root is, among others, an ingredient in the “soup of the four things”, the most widely used female tonic in China. The other species used are Rehmannia glutinosa, Ligusticum wallichii and Angelica sinensis.
From the dried and crushed petals of various peony species, a tea is obtained that is used as a cough remedy and as a treatment for hemorrhoids and varicose veins.