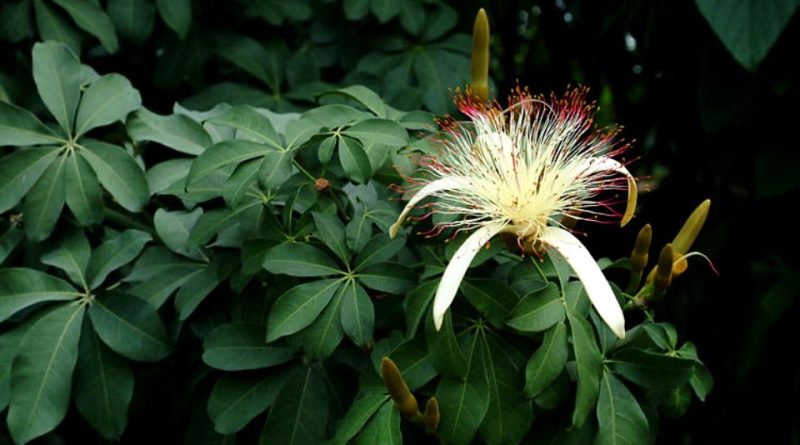 The Malabar chestnut (Pachira aquatica Aubl.) Is an arboreal species belonging to the Malvaceae family.

Etymology –
The term Pachira is the vernacular name used in the language spoken in Guyana.
The specific aquatic epithet comes from aqua water: for the growth environment, in or near water.

Geographic Distribution and Habitat –
Pachira aquatica is a tropical wetland tree native to Central and South America where it grows in swamps.
It is present in South America: Brazil, Bolivia, Peru, Ecuador, Colombia, Venezuela, Guyanas; in Central America, from Panama to Mexico.
Its habitat is that of river estuaries and lowland rainforests. 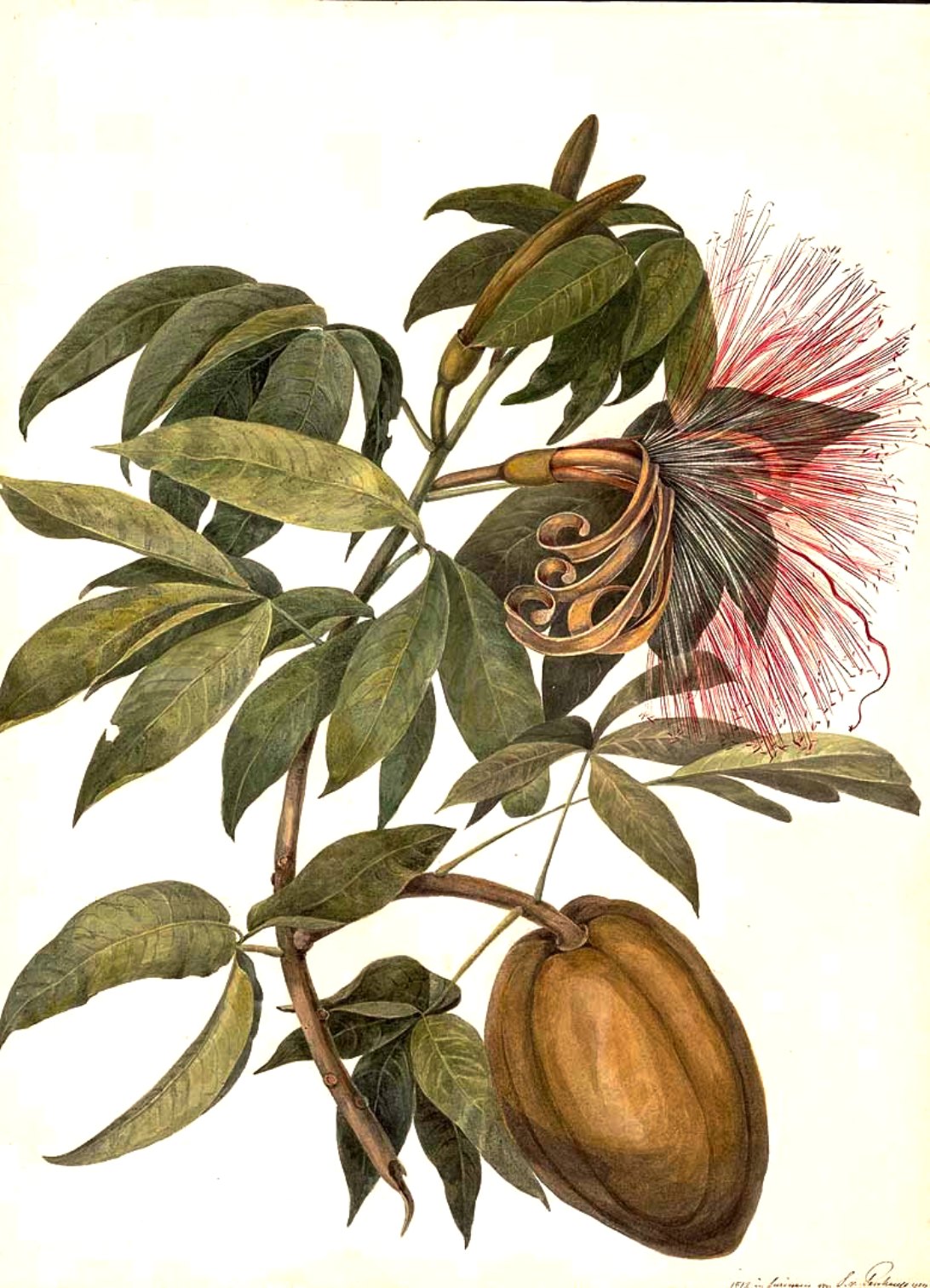 Description –
Pachira aquatica is a tree that can grow, in nature, up to 18 m in height, which produces a large crown.
This plant forms a slightly thickened root with smaller roots, which also acts as a water reservoir.
The bark is relatively smooth and brown to gray in color and slightly cracked; the young branches are green.
The leaves are palmate, bright green in color, with lanceolate leaves and smooth green epidermis.
Transitional and long-peduncle, hand-shaped, slightly leathery leaves are arranged at the ends of the branches. The petiole is up to 24 cm long. The leaves are bright green and shiny and consist of up to nine leaflets (fingers). The leaflets, mostly hairless, with short petioles, are up to 28 cm long and rounded with round, pointed or pointed tips. They are lanceolate or obovate, with light medium veins. There are inclined stipules. The leaves and flowers are edible.
The flowers are showy (among the largest tree flowers in the world) and have long, narrow petals that open like a banana peel and reveal hair-like yellowish orange stamens. The greenish-yellow or cream-colored flowers are hermaphroditic and very large, short and with double perianth, with a large peduncle; they resemble long stamens of shaving brushes. The terminal flowers, single, double or triple, are up to about 2 cm in length, outside with fine, green-brown down. This species has a cup-shaped, greenish-brown calyx about 2 cm long. The petals are elongated and up to 30 cm long. the flowers, each with about 180-250 pink stamens, have elongated anthers. The ovary has five upper chambers with a long stylus with a short and divided lobed scar.
The fruits are large, brown, woody capsules, up to 20-30 cm long, rough and egg-shaped, with a diameter of about 10-15 cm, weigh about 1-1.5 kg and contain 10-25 nuts.

Cultivation –
Malabar Chestnut is a plant that is grown as a tropical ornamental in humid and frost-free areas and can be propagated from both seed and cuttings.
It is a hardy plant and adapts well to a variety of conditions. The plant requires bright light, but not direct sunlight. It is advisable to gradually introduce a plant grown indoors to direct sunlight outdoors to reduce the chances of scorching its leaves. This tree thrives in both common loam and water in a hydroponic system.
The plant grows well in bright light, but also tolerates partial shade at room temperatures of 12 ° C to 25 ° C. A plant’s leaves can turn yellow and fall off in the fall period, which is not a sign of disease, and the plant will resume its growth smoothly the following spring.
The maturity of the plant occurs around 4-5 years. It produces its first fruits in spring and autumn. Additionally, it can withstand temperatures up to 5 ° C without losing its leaves, although people recommend not growing it below 12 ° C; the ideal cultivation temperature is around 20 ° C all year round with high humidity. An occasional weak frost can cause it to lose its leaves and grow new leaves the following spring.
It can also be grown in the apartment where it should be kept rather dry, especially in the winter months. It is recommended to avoid proximity to dry heating air. It is best to spray every day, otherwise it can lose its leaves. In its first year as a houseplant, a plant should not be fertilized. Later, you can use some fertilizer when watering in the summer. Under good growing conditions, this species grows quite fast. If it is too large, it can simply be reduced to the desired size. After about 1-2 weeks, new shoots form laterally from the cut points.
Pachira aquatica is also sometimes grown for its nuts.
The nuts grow inside the capsule until it bursts and releases them. Nuts are considered edible, with a flavor similar to a European chestnut. Some people grind nuts and use them in a hot drink. They are toxic to mice in their raw state but are consumed by people raw or roasted.

Customs and Traditions –
In East Asia the Pachira aquatica (Chinese: 馬拉巴 栗; pinyin: Mǎlābā there; literally ‘Malabar Chestnut’) is often referred to as “the waving money tree” (搖錢樹). This tree has long been popular as an ornamental in Japan. In 1986, a Taiwanese truck driver first grew five small trees in a single flowerpot with their intertwined trunks. The popularity of these ornamental plants took off in Japan and later in much of the rest of East Asia. They are symbolically associated with financial good fortune and are typically seen in business, sometimes with red ribbons or other adornments attached. Trees play an important role in Taiwan’s agricultural export economy, with exports of NT $ 250 million (US $ 7 million) in 2005.
However, many cultivated specimens sold as Pachira aquatica are actually the similar species, P. glabra, which develops a thick base at a younger age and has a smaller growth habit, less showy flowers and a half green seed capsule. of the size compared to those of the Pachira aquatica.
This plant has a wide range of uses, being especially appreciated for its edible seeds but also providing other foods, medicines, fibers, dyes, wood, etc. It is often cultivated, and has been naturalized, in many areas of the tropics for its seeds.
The tree is also planted in roadside trees to provide shade and as an ornamental in gardens.
Furthermore, Pachira aquatica has both edible and medicinal uses.
In the food sector, raw or cooked seeds are used. Raw seed tastes like peanuts, while roasted or fried in oil tastes like chestnuts.
Roasted seeds taste like cocoa.
The seed can be ground into a flour and used to make a bread.
Roasted seed is sometimes used to make a drink.
The seeds produce 58% of a white, odorless fat which, when refined, is suitable for cooking.
Young leaves and flowers are also cooked and used as a vegetable.
For medicinal use, the peel of the immature green fruit is used, which is used in the treatment of hepatitis.
The seeds are used as an anesthetic.
The bark is used medicinally to treat stomach ailments and headaches, while an herbal tea is obtained from the boiled bark which is used as a blood tonic.
An infusion of cold water is obtained from the crushed leaves which is used to treat a burning sensation in the skin.
Biochemically the presence of cyclopropenoid fatty acids in walnuts has been used to state that walnuts are inedible and not suitable for human consumption, despite the walnut being eaten or used medicinally. At least one review indicates that CPFAs are carcinogenic, co-carcinogenic, and have medical and other effects on animals; according to this review, “CPFA in food is dangerous to human health”. Of 6 rats tested in a P. aquatica study, 5 died after consuming the nuts. The surviving rat had enlarged organs including stomach, liver, pancreas, kidneys, lungs, and also had spleen atrophy. There is currently no research on the health effects of nut consumption on humans, but we can also find some studies on nutritional facts and food usage.
As for other uses, remember that a yellow dye and a dark red dye are obtained from the bark.
Also from the bark a fiber is obtained which is used for caulking boats and ropes.
Seed oil has industrial potential for soap production.
The fruit is spread out on the ground to repel sand fleas.
The wood is white in color and is light, fibrous, soft and of low durability. This is used only for low-quality purposes such as making boxes and matches and is suitable for making paper, producing 36% pulp.

Preparation Method –
Pachira aquatica is a plant whose seeds are used, raw or cooked.
The seed can be ground into a flour and used to make a bread.
Roasted seed is sometimes used to make a drink.
The seeds produce 58% of a white, odorless fat which, when refined, is suitable for cooking.
Young leaves and cooked flowers are also used as vegetables.
For medicinal use, the peel of the immature green fruit is used, which is used in the treatment of hepatitis.
The seeds are used as an anesthetic.
The bark is used medicinally to treat stomach ailments and headaches, while an herbal tea is obtained from the boiled bark which is used as a blood tonic.
An infusion of cold water is obtained from the crushed leaves which is used to treat a burning sensation in the skin.