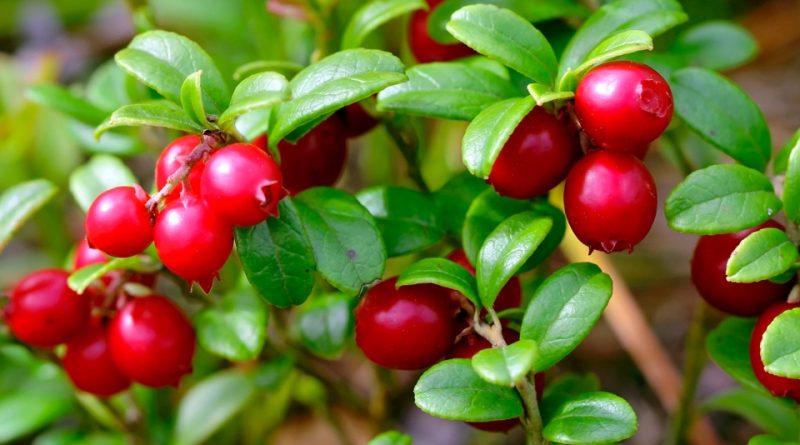 The Small Cranberry (Vaccinium oxycoccos L.) is a shrubby species belonging to the family of the Ericaceae.

Geographical distribution and habitat –
Vaccinium Oxycoccos is a widespread and common species that grows widely in the cooler climates of the northern and widespread hemisphere in northern Europe, from Norway to France and east towards European Russia and the Balkans, North Asia, including Siberia, China, until Japan and Korea and then in North America, from California to Maryland.
This plant is indicator of habitat with wet soils that are low in nitrogen and with high water layer. It is an indicator of marshes of conifers where it grows on the peat that can be saturated for most of the time and on acid and low soils in nutrients. 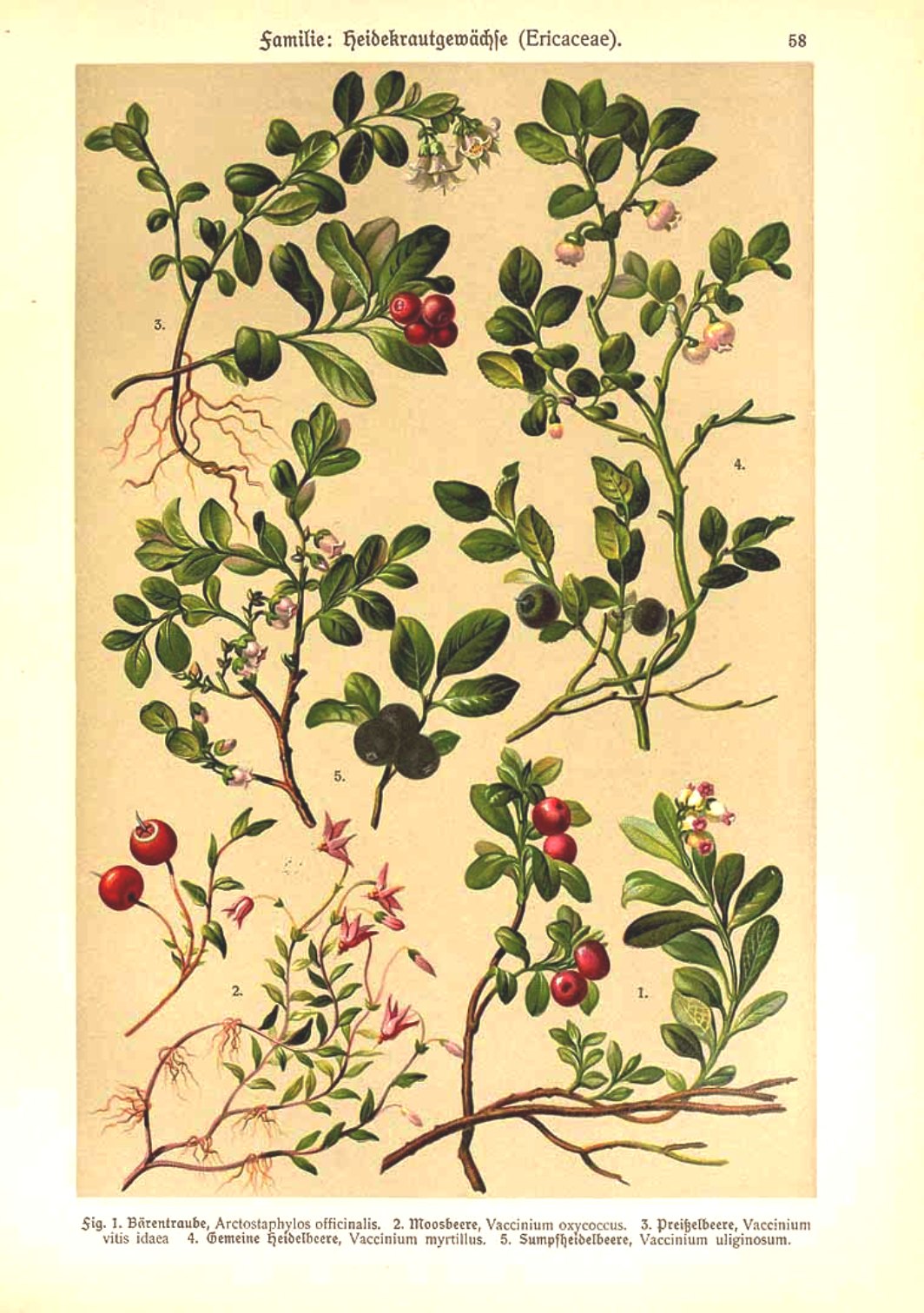 Description –
Small Cranberry is a small prostrate shrub with poorly branched stems similar to screws that form roots to nodes.
The plant grows from a rhizomatous root, with rhizomes up to 80 cm long, forming a growth rug over time.
The leaves are coriaceae and launched, up to 1 cm long.
The flowers form high on the stems; They have a white or pink and flexed corolla back away from the center of the flower.
The fruit is a red berry presenting stains when it is young and measuring up to 1.2 cm wide.

Cultivation –
Vaccinium OxyCoccos is a plant that is collected in the natural state for local use such as food, medicine and source of materials. Sometimes it is collected in large quantities that can be sold commercially, or it can be cultivated in the gardens, where it can be used as soil coverage.
This plant requires a limestone free soil, possibly wet or wet, preferring peat-rich soils.
From a pedological point of view, it prefers a very acidic ground with a pH in the range of 4.5 to 6, as the plants become chlorotic soon when it is present of the limestone.
He prefers a sunny or light shadow position even if he fructure better in a sunny position.
It must also be protected by strong winds and fruits often persist on the plant throughout the winter without rot.
It is a plant that regraves after a fire and traditionally, the areas where the Vaccinium Oxycoccos grows are given to the fire annually by the native peoples, to encourage the regrowth of the plant that prevails so on other species, thus improving the overall production returns of Fruits.
The plants are self-fertile, but fruit production has improved if you also have crossed pollination.
Propagation can take place by seed, with seeding that must be carried out at the end of winter in a greenhouse, covering the seed.
The stored seeds may take a period up to 3 months of cold stratification before germinating them.
Another relationship says that it is better to sow the seed in a greenhouse as soon as it is mature but this can also depend on the growth areal.
However, when the plants have reached about 5 cm can be transplanted into individual vessels where they will be made to develop for at least their first winter, inside a greenhouse. The definitive transplant must be done in the next spring or at the beginning of the summer, and in any case after the frozen period.
Propagation can also take place by cutting or pollons.

Uses and traditions –
The Small Cranberry is a plant that is used for a memorable time both for food use and for medicinal uses.
The fruits are eaten cooked or raw. The fruit has a high content in a pectin which can be useful for mixing it with fruits that have a low pectin content when jams must be prepared.
Please note that Pectin has proven to play a precious role in the diet, as, according to some research, protects the body against radiation.
In addition, a tea is prepared from the leaves.
In the medicinal field, instead a plant infusion was used to treat cases of mild nausea.
The fruit is antiseptic, antitmuff, diuretic and febrifuge. It should be taken especially as a juice, for the prevention and treatment of urinary tract infections, the neurogenic bladder, as urinary deodorant for people with incontinence, prevention of urinary block. It is also used for the treatment of type 2 diabetes, chronic fatigue syndrome, and other pathologies.
The fruits contain anthocyanidines, Ellagitans, flavonoli such as quercetin and kaempherol, catechin and phenolic acids. Other components include ascorbic acid, beta-carotene, chlorogenic acid, glutathione and alpha-tocopherol.
Blueberry juice is acid, but does not acidify urine as they thought in the past.
The fruit contains
Blueberries contain proantocyanidines, also known as condensed tannins and a compound with high molecular weight that has not yet been identified. These constituents seem to interfere with bacterial adhesion to epithelial cells of the urinary tract. The fruit of this plant, however, does not seem to have the ability to release the bacteria that are already adhering to the epithelial cells of the urinary tract.
The laboratory tests suggest that even fructose contained in fruits could also contribute to anti-infectious activity.
Fruit juice showed antibacterial activity in the middle of culture against Escherichia coli, Staphylococcus aureus, Klebsiella pneumoniae, pseudomonas aeruginosa and proteus mirabilis.
The compounds contained in the fruit could also prevent the adhesion of Helicobacter Pylori (H. Pylori) in the stomach.
The first tests show that the juice could increase the antioxidant capacity of the plasma.
There are also preliminary evidence that the fraction of anthocianidine contained in the fruits could have an anti-creatogenic activity.
The fruit of vaccinium oxycoccos, in addition to many other fruits and vegetables, contains significant amounts of salicylic acid, which is the active metabolite of the aspirin and has anti-inflammatory, anti-pipeline and anticancer effects. The juice contains about 7 mg of salicylic acid per liter. Drink three portions from 250 ml juice a day for two weeks increases serum salicylate levels. The excretion of salicylic and salyclic acids also increases (a metabolite of salicylic acid) in urine.
Other uses include agroforestal ones.
Plants can be cultivated as soil coverage with a density of about 4 plants for M2. Plants quickly form a dense carpet when they are flourishing.
Among the other uses we remember that the fruit juice is used to clean silver.
Furthermore, a red dye is obtained from the fruit.

Preparation mode –
The Vaccinium OxyCoccos is a plant that is used in the food and medicinal product both the fruits and the leaves.
The fruits are consumed both cooked and raw.
From the leaves of this plant, a tea is also prepared, while for medicinal use you can prepare an infusion of the plant that was used, especially a time, to treat cases of mild nausea.
The fruit you can also use the juice while the same is useful when used together with other fruit to prepare jams.

Attention: pharmaceutical applications and alimurgic uses are indicated to mere information purposes, they do not in any way prescribe medical prescription; We therefore declined all responsibility for their use for healing, aesthetic or food purposes.