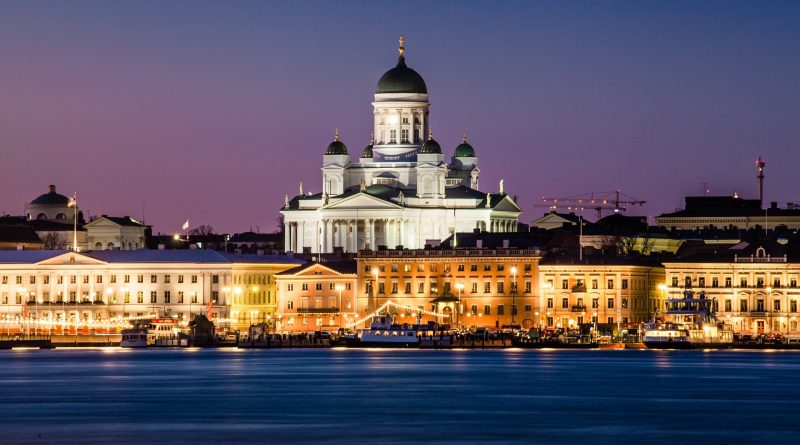 Finland is a town with an area of ​​338,424,38 km² and with a population at 2018 of 5,536.146 inhabitants.
The capital is Helsinki with a population at 2018 of 648,650 inhabitants.
Finland, which is officially the Republic of Finland, is a state of northern Europe, which belongs to the region known as Fennoscandia and the Scandinavian peninsula. It borders Sweden to the west, Norway to the north and Russia to the east. It faces south on the Gulf of Finland, on whose southern shore there is Estonia. It is a state that is part of the European Union.

Geography –
Finland is part of the boreal biogeographical region and is between the 60th and 70th latitude; Over a third of the territory is north of the Arctic Circle and this makes one of the most northern states in the world. It looks like a vast uniform plateau, enriched in the northern regions from the Scandinavian mountains chain, so much so that its highest point (1,324 meters) is the Halti, a mountain located at the far northwest, on the border with Norway . The morphology of the territory is a consequence of intense glacial movements, which contributed in a decisive way to smoothing and to chop the harshness of the reliefs through the contribution of morainic debris.
To the north of the Oulujoki river the territory changes in appearance: heading north they first meet numerous hilly reliefs until reaching, in the northwestern part of the country to the eastern side of the Scandinavian mountains, in the north-eastern part of the country, Lapland extends, The land of the tundra, inhabited, as well as from the Finns, from a Sami minority, whose main activity is reindeer breeding.
The coast of the village, despite being generally low, is jagged, facing numerous islands. It is wet south by the Gulf of Finland and west from the Gulf of Botnia.
Finland, from a hydrographic point of view, is studded by over 50,000 lakes of glacial origin. The largest found in the southern part, such as the Saimaa, the Paijanne, the Vesijarvi, the Kavallesi. To the north the largest is the Inari. As far as the rivers are concerned, instead, these have a short course and the most important flow in the northern part of the Gulf of Botnia and are the tournament, which is a border with Sweden, Oulu and Kemi. Vast sea arms, lakes and waterways are frozen up to eight months a year.
The territory must many of its features in the presence of glaciers in the age of glaciations, which here were thicker and permanent much longer than elsewhere. They have in fact leveled the territory and maximum elevation is the Ridnitšohkka, of only 1 316 m. As in all the fennoscandia, following the removal of the enormous weight consisting of the glacial blanket, a phenomenon of “post-glacial bounce” is also in place which causes a continuous although almost imperceptible elevation of the entire territory, of about 1 cm the year.
Among the big, small and very small lakes that occupy the central and southern plain, the greatest ones are:
– The Saimaa (which reaches an extension of 4 400 km² and is the 4th in Europe);
– The Päijänne;
– The Inari;
– Kallavesi.
In the south-eastern part of the country there are numerous lakes (tens of thousands, often communicating among them).
The longest river in the country is Kemijoki (550 km) that flows into the Gulf of Botnia near the city of Kemi. The main rivers, in addition to Kemijoki, are: Kymi (203 km), which flows into the Gulf of Finland, lathe (522 km), which flows into the Gulf of Botnia, and Muonio (386 km), which flows into the River Torne.
Finally the islands of Finland. They are numerous, the most important archipelago is that of the Åland islands.

Climate –
The climate of Finland belongs to the cold tempered climate belt, given latitude. It has a strong character of “transition” between the continental climates of the vast Russian-Siberian plagues and the oceanic climates of the Atlantic regions to the west: this especially during the winter, when the direction of the wind originously influences the temperature.
The pluviometric regime, as in all the boreal lands placed at high latitude (and with no “oceanic” climate), is characterized by a maximum peak in the late summer (in early August in Lapland, in September in the southern area) and a winter Tending to dry the more you go north. The amount of annual rain is relatively poor, especially in Lapland (where it also descends below 400 millimeters, especially in the Ivalo area).
The average temperatures of the hottest month (July) are between 12-14 ° C of the Hills of Lapland (but also descends below 10 ° C in the highest areas) and about 18 ° C of the southern range.
The average temperatures of the coldest month (January) vary between -5 ° C of the southwest coastline and I -14 ° C of the coldest areas of Lapland (particularly in the surroundings of Ivalo and in the hilly valleys near the Swedish border). The minimum annual values ​​descend frequently below the -30 ° C, and in Lapland the first autumn frosts are already felt between September and October. 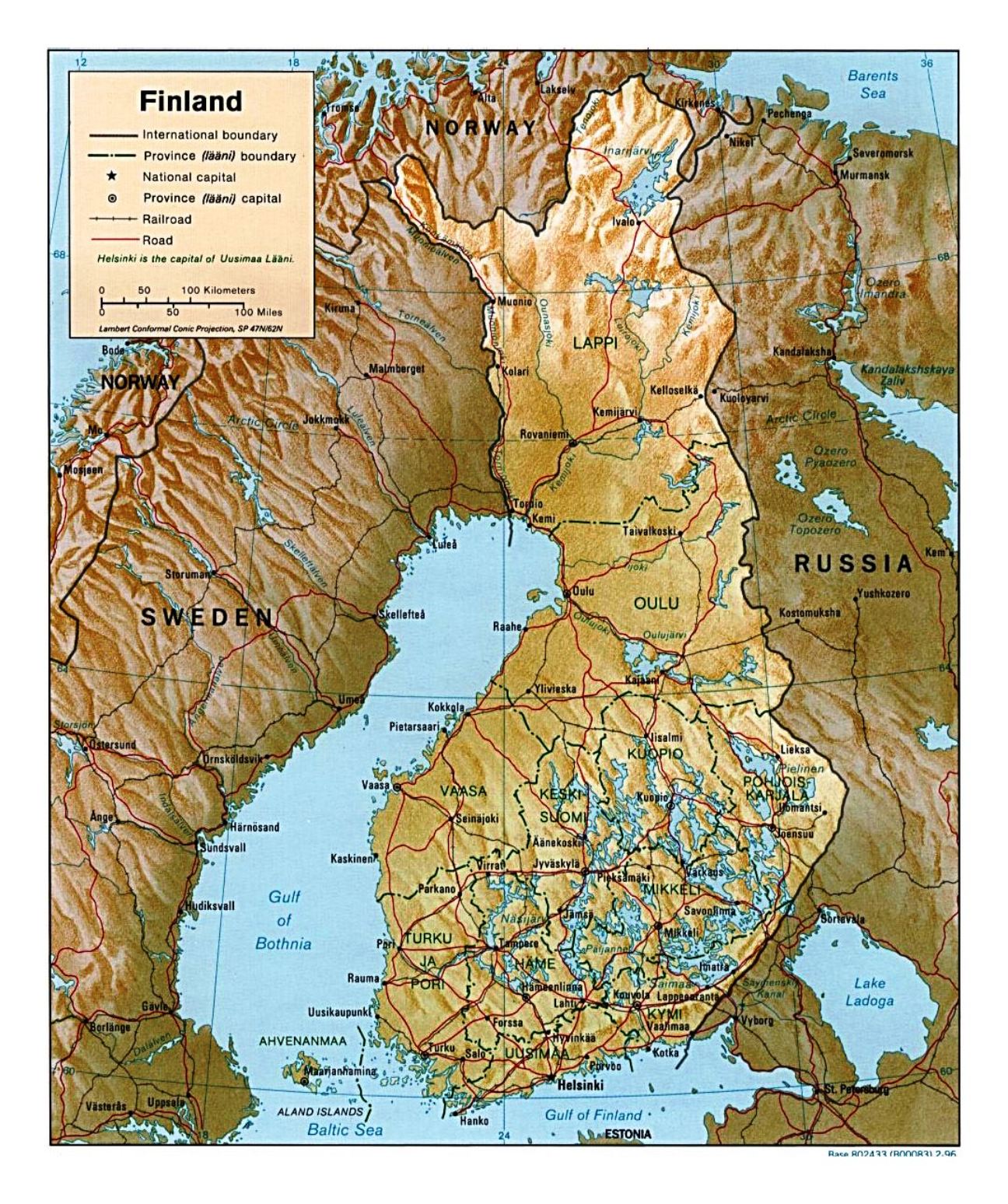 Flora –
In Finnish there are more than thirty national parks, perfect for those who love to trekking and live in contact with nature.
Nuuxkio National Park and Helveinjärvi are very famous among hikers, because they count with numerous areas where it is allowed to camp.
The Kolovesi National Park is famous for Lake Saimaa and its small archipelago.
For the latest, but no less importance, we mention the national parks of Koli, Oulanha and Urho Kekkonen.
The forests of Finland cover 86% of the territory, with a greater diversification of arboreal species in the south of the country, where ontanes, poplars, maples and elms grow. Forests constitute the largest resource in the country, which is an important exporter of wood and wooden paste used to produce paper.
The vegetation consists of forests of poplars and birches, which pushing itself to the north are transformed into a tundra and lichens.
The Flora of Finland is extremely rich and varied and affected by the climatic conditions of the country.
Northern Northern Finland is dominated by conifers and birch; Noteworthy is the presence of the Finnish peccio, natural hybrid shape between red peccio and siberian pecco.
In Finland there are about 1,200 types of different plants and about 1,000 species of lichens.
At the end of May and September, there is the production of wild fruits, such as Ursa Ursa, Strawberries and Blueberries. In this period, in the north of the country, the Arctic raspberry is present.

Fauna –
Finland is a nation dotted with green wooded areas, fantastic islands on the Baltic, hills swept with arctic winds, and countless blue lakes (some say that there are exactly 187,888).
These picturesque and uncontaminated views are the perfect habitat for many animals and wild birds, such as bears, wolves, lids, eagles, cranes and swans, as well as the most rare seal species in the world. Birdwatching lovers will have the opportunity to observe rarely starvable birds in other parts of Europe. Even naturalist photographers will be able to take excursions to carry out unique shots of wild animals directly in their natural habitat. Available ad hoc shelters in nature.
The fauna, as mentioned, characterizes the Finnish territory. Among these we remember the main ones.
The lynths that have become increasingly common in the forests of Finland in recent years. Although they are not easy to spot: a sense of smell and extremely developed hearing allows them to keep away from humans.
We remember the wild swan. This magnificent white swan (also called Cenoro Swan) is the National Bird of Finland. Storms of swans and cranes return to Finland after spending winter in the south. And I am always welcome: all lovers of Finnish nature know that it is their arrival to mark the beginning of spring.
Then we have the seal from the Saimaa rings. These rare seals have adapted to live in the sweet waters of Lake Saimaa – the largest lake in Finland – where they lived since the end of the last ice age. This subspecies only lives in Lake Saimaa. Thanks to various measures taken to ensure their preservation, their number has risen to more than 300, but despite this it is still considered a species at risk of extinction.
We remember the owl of Lapland (Lapin Pöllö). This majestic owl, characterized by a series of concentric circles around the eyes, seems to have an expression of continuous surprise. But be careful: the large gray owls of Lapland can become aggressive if you try to get closer to their nest when they have just given birth.
The wolf is another characteristic animal of Finnish forests. The population of these mammals is scarce and do everything to keep away from humans. The best way to spot a wild wolf is taking part in organized events, such as sighting excursions in the border regions of Eastern Finland, where the number of wolves is higher.
Furthermore, Finland hosts more than 1500 bears. Their number is so low that it is really difficult to spy them, also because they are very shy. Many tour operators organize excursions in the forests of Eastern Finland: spending the night in hiding hidden, it will be possible to observe and photograph wild bears while they eat fish or pieces of meat left to attract them.
We also mention the Wolverine, known in Italian even with the common name of Ghiottone, are artic animals that look like small elongated bears. As a breed, in fact, are the closest relatives of other Finnish wild animals, such as marten, otter and rate. Excursions for Wolverine observation are organized in Western Finland.
Among the birds it is worth mentioning the Siberian jay (Kuukkeli). Siberian acorns are sociable birds that populate the northern regions of Finland, including Lapland. They can be seen during cross-country skiing excursions, especially in refreshment areas, since they are fond of bread crumbs left by skiers.
In the forests of Finland you can spot the hermin. The Umine is a small animal that manages to camouflage perfectly in the wooded environments, thanks to its completely white winter fur. Many of the animals that populate the Finnish forests change their fur during the autumn, becoming white during the winter.
Finally it is necessary to remember the white-tailed sea eagle (Merikotka). Thanks to the tireless work of the conservatives of Finnish fauna, the beautiful white-tailed sea eagles have returned from the edge of extinction to flying over the hazard of the nation over the beautiful waters and islands of the Baltic archipelago.