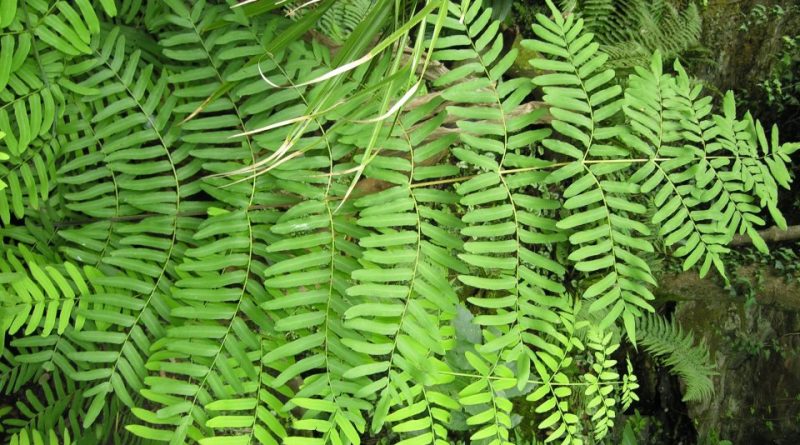 The Royal Fern (Osmunda regalis L.) is a fern belonging to the Osmundaceae family,

Etymology –
The term Osmunda comes from Old Norse (ancient Scandinavian language) ass dio and from mund protection: divine protection because healing and magical properties were attributed to this fern; or, with the same etymology, from the Saxon Osmunder (variation of the Old Norse Asmundr), another name for Thor, god of thunder, son of Odin, to whom the plant was dedicated.
The specific epithet regalis comes from rex, régis re: regal, majestic (due to its size), worthy of a king.

Geographic Distribution and Habitat –
Osmunda regalis is a fern which, despite the reduction of the areas due to the reclamation of marshy lands, is widespread throughout Western Europe, but is also present in isolated stations in Eastern Europe, in Sweden, Poland and Turkey.
Unfortunately it is in decline in much of Europe due to the reduction of wetlands, while in some areas of great diffusion in Italy it has even risked extinction due to the indiscriminate removal of loaves of soil containing the root system of the plant to obtain the so-called osmunda, or land for the cultivation of orchids, by flower growers.
In Italy it is fairly widespread; important stations are found for example in Tuscany in the Massaciuccoli lake, in the Paduletta di Ramone within the Padule di Fucecchio, in the lake of Sibolla, in the hygrophilous woods in the area of ​​the dried up marshes of Bientina, in isolated stations in the hills of the Cerbaie, on Mount Pisano and Mount Amiata. It is also present on Elba and Montecristo. In southern Italy, particularly in Calabria, the presence along the course of the Calabrian Ancinale river and on the shores of the natural lakes present in the municipality of Fagnano Castello is noteworthy.
Its habitat is that of humid and acid soils, in particular hygrophilous woods, swamps, spagnete. 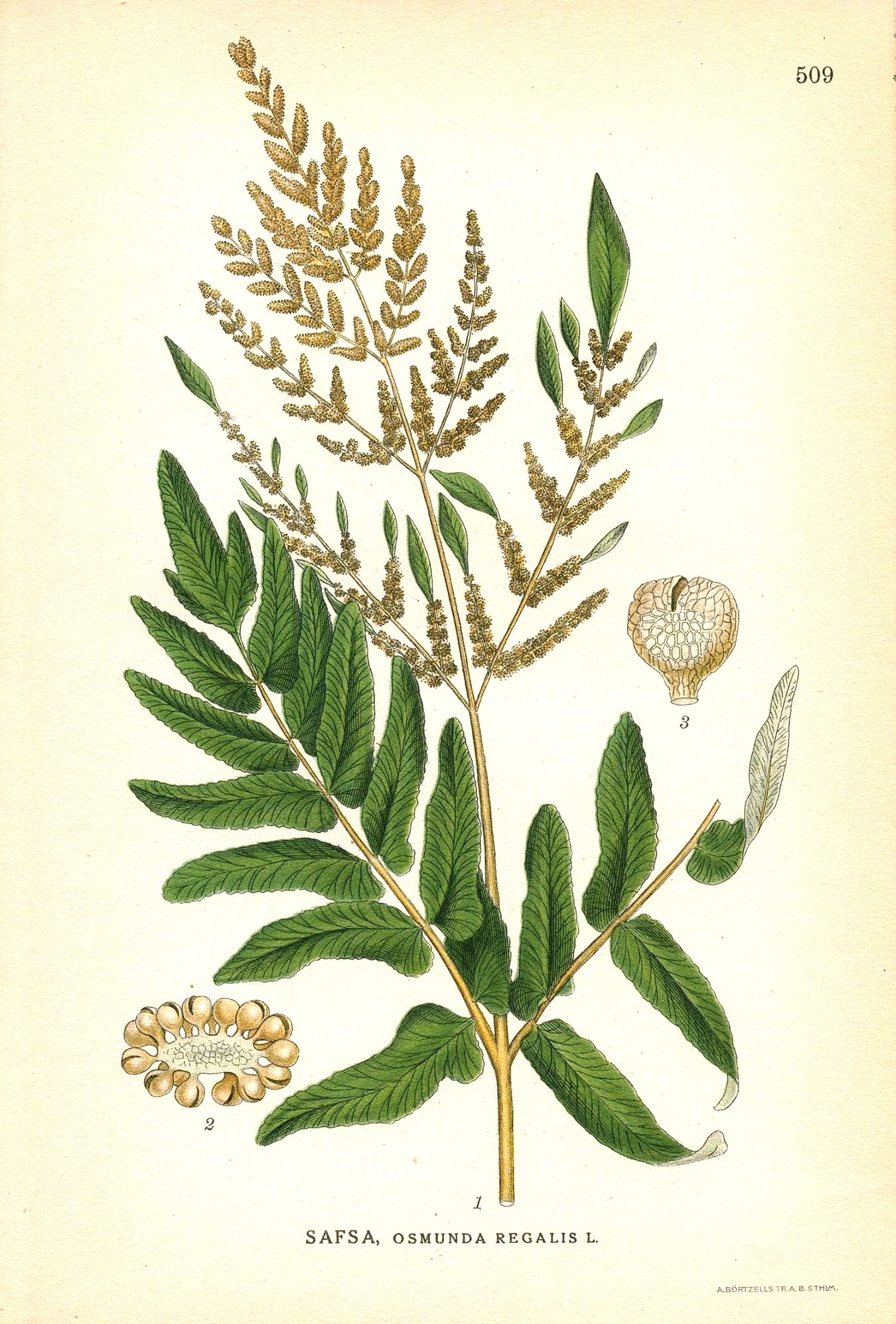 Description –
The Royal Fern is a deciduous herbaceous plant that features separate fertile and sterile fronds. The sterile branches reach 160 cm in height and a width of 30–40 cm. The fronds are broad, bipinnate, with 7-9 pairs of fins up to 30 cm long; each fin has 7-13 pinnules 2,5-6,5 cm long and 1–2 cm broad. The fertile fronds are lower but more erect, 20-50 cm tall with mostly 2-3 pairs of sterile pinnules at the base, and at the top 7-14 pairs of fertile fins covered with thick accumulations of sporangia, called sori.
The sporangia are subglobose, in panicles along the axes of the upper fronds, briefly petiolate, dehiscent in two valves. Numerous spores trileti.

Cultivation –
Osmunda regalis is a fern that develops from a short, erect, massive rhizome.
Plants are evergreen in warm winter areas but deciduous elsewhere.
This plant, in various parts of the world, is collected in nature to be used as a medicine and source of materials. It is often grown as an ornamental.
Osmunda regalis, which grows at moderate altitudes in the tropics, is also very resistant to cold and is known to survive temperatures down to at least -30 ° C.
It is an easy plant to grow that prefers a muddy and marshy soil with the presence of clayey or fibrous peat, sand and loam.
It grows well in most moist soils, preferring an acidic pH.
In order to grow it requires a constant presence of water, so much so that it lives well near ponds, streams, etc. ..
Plants thrive in full sun as long as there is no shortage of moisture in the soil and also in shady situations under shrubs, etc.
As for propagation, please note that spores lose their vitality very quickly (within 3 days) and are best sown as soon as they are ripe on the surface of humus-rich sterilized soil in a slightly shaded place in a nursery. Keep the compost moist, preferably by placing a plastic film over the pots or pallets.
Plants develop very quickly.
This fern can also propagate by division of the tufts in the dormant season, even if it is a very complex practice due to the mass of bristly roots.

Customs and Traditions –
Osmunda regalis is a plant that, unfortunately, has long been used due to its root system used in floriculture for the cultivation of orchids and other epiphytes.
This plant boasts traditions and historical uses.
In Slavonic mythology the sporangia, called Flowers of Perun, would possess numerous magical abilities, would give those who wield them the ability to cast out demons, to fulfill their desires, discover secrets, and understand the language of trees. However, the collection of Perun flowers is a complex and dangerous ritual; they were to be collected on the night of Kupala, then, after the advent of Christianity, on Easter night. The gatherers had to stay within a circle traced around the plant and endure threats and taunts from demonic entities.
Also, as is the case with many other ferns, the young shoots of this fern are eaten as food, which is said to have a similar taste to that of asparagus. In Korean royal cuisine it is used to prepare a dish called Namul.
However, it should be remembered that, although no reports of toxicity have been found for this species, some ferns contain carcinogenic substances, so a certain caution is advisable.
Many ferns also contain thiaminase, an enzyme that deprives the body of its vitamin B complex. In small amounts this enzyme will not harm people on an adequate diet rich in vitamin B, although large amounts can cause serious health problems. The enzyme is destroyed by heat or complete drying, so cooking the plant will remove the thiaminase.
The plant also has medicinal uses and its root is astringent, diuretic, tonic and vulnerary.
It is useful in the treatment of jaundice and in the removal of bowel obstructions.
The fronds are used to make compresses to be applied externally to wounds and rheumatic joints, for which they are quite effective.
As for other uses, Osmunda regalis can be grown as a ground cover when the individual plants are spaced about 1 meter from each other.
Other uses see the use of plant hairs that are mixed with wool and are used in the manufacture of fabric.
Furthermore, as mentioned, the roots are the source of the “Osmunda fiber”, once widely used for potting orchids and other epiphytes.

Preparation Method –
Osmunda regalis is a plant that is used both in the food, medicinal and other uses.
Its young shoots are eaten as food and in Korean royal cuisine it is used to prepare the dish called Namul.
From the fronds, an infusion is prepared which, combined with wild ginger roots (Asarum species), has been used in the treatment of children with seizures caused by intestinal worms.