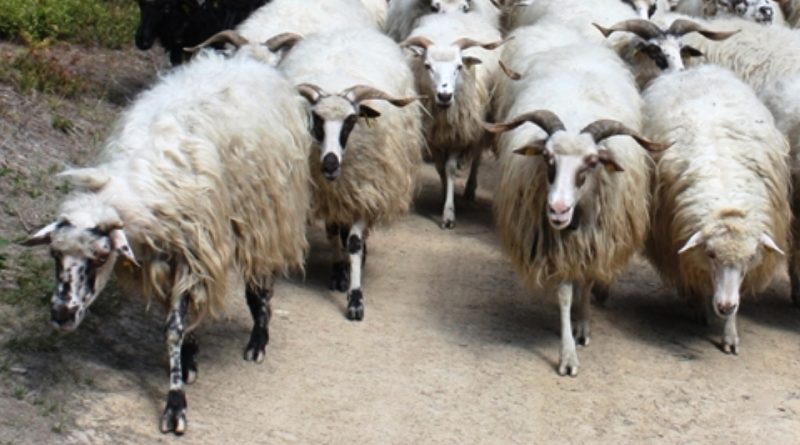 The valaška is an ancient sheep breed (Ovis aries Linnaeus, 1758) raised in the Carpathians, with a main aptitude for producing milk.

Geographic and Area Distribution –
The valaška is a sheep breed raised in small numbers and small farms in Slovakia but with very few pure-bred flocks.

Origins and History –
The Valaška is a breed that was brought to the country in the 14th century by Wallachian shepherds from Moravia. At that time this breed represented one of the main resources of those transhumant populations that inhabited the Tatra mountains and, as in Romania, produced bryndza cheese, but also parenica, oštiepok, and a drink made with the residual whey of cheese processing called žinčica.
Subsequently, especially between 1950 and 1980, crossings were made with rams of texel, hampshire, cheviot, leicester, lincoln breeds, in order to “improve” the breed, that is to increase the yield in milk, meat and also to improve the quality. of wool, without however modifying its characteristics of resistance and frugality.
This brings us to 1982 when it was recognized as a “breed”.
Unfortunately, in recent decades this breed has run the risk of extinction due to the abandonment and depopulation of the mountains and the consequent reduction in transhumant sheep farming.
A recovery program was thus initiated and today this breed is safeguarded in particular for reproduction, in order to preserve its genetic heritage. Shepherds can take advantage of an annual contribution which is essential for its conservation but also to support pastoral activity in the Slovakian mountains.
The valaška today is present in rather small numbers in Slovakia with only a thousand heads compared to the more than 337,000 sheep raised in the country while about 8800 heads of zošľachtenaì valaška (which means improved valaška) are reared.

Morphology –
The original valaška is a breed with twisted horns, a wedge-shaped head and a white, dense and rough fleece and the presence of possible black spots in the area below the eyes.
It has a height at the withers that varies between 51 and 55 cm, with an average weight ranging from 40-45 kg of rams to 30-35 kg of sheep.

Productive attitude –
The valaška is a breed with a solid constitution, very resistant and suitable for rough and inaccessible terrain such as those of the areas of the Tatra mountains. It also bears well the adverse weather conditions such as snowstorms, rapid climate changes, spring frosts and autumn night ones, without suffering particular consequences or diseases. To this we must add that it is a very frugal breed.
The valaška now divides the pastures with another very resistant local breed, the cigája, recognizable by its dark-colored, hornless head.
From the valaška we get mainly milk and to a lesser extent meat and wool.
Bryndza is obtained from the milk, which is a soft and rather savory cheese, obtained by crumbling fresh or aged sheep’s cheese. Its origin is to be found in the pastoral traditions of the Wallachians, a population from Romania, who colonized the Slovak Carpathians between the fourteenth and seventeenth centuries. The Wallachians raised sheep (including the valaška) and practiced transhumance, living in the mountain pastures from April to November.