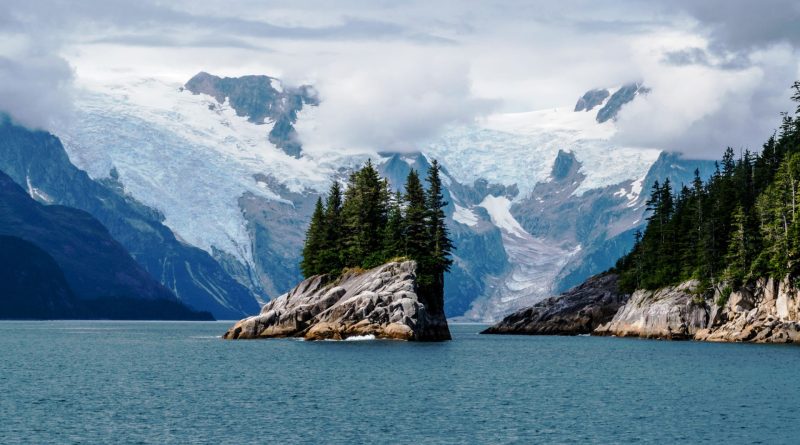 Kenai Fjords National Park, whose WDPA Code is: 1016 is a United States National Park located in Alaska with a land area of ​​2711 km².
This park, like other American parks, is managed by the National Park Service.
Kenai Fjords National Park was initially established by President Jimmy Carter on December 1, 1978 and definitively confirmed with the “Alaska National Interest Terre Conservation Act” of 1980.
The park’s headquarters are located in Seward, a city located in Alaska, in the Kenai Peninsula borough.
In this area, human settlements (by the natives) have always been sparse, although some archaeological research has found some sites of villages inhabited at various times since 950 AD. on.

Geography –
Kenai Fjords National Park is located on the southeastern side of the Kenai Peninsula (about 210km south of the city of Anchorage) bordered by Resurrection Bay and mostly by the Gulf of Alaska. The park is bordered on the west by the Kenai National Wildlife Refuge and on the south by the Kachemak Bay State Park.
The most characteristic attraction of this park is represented by the countless fjords carved by the ice that descend steeply to the sea. There are at least 38 glaciers, the largest of which is the Bear glacier. Fjords are narrow glacial valleys partially submerged below sea level formed by a combination of sea level rise and land subsidence under the weight of ice. At the center of the park is the massive Harding Ice Field over 100km long (one of the largest ice fields in the United States).

Geology –
The Kenai Fjords National Park was formed by plate tectonics in particular by subduction of the Pacific plate under the North American plate. The base of the fjords can be 180 to 300 deep below sea level.
The North Pacific plate has brought a variety of rocks against the coast, so the coastal region is a mixture of rocks that originated elsewhere.
51% of the park area is covered by ice and the first glaciers were formed about 23,000 years ago, that is, in a period that corresponds to the end of the last ice age; at that time Alaska was mostly ice-free due to the arid climate conditions. 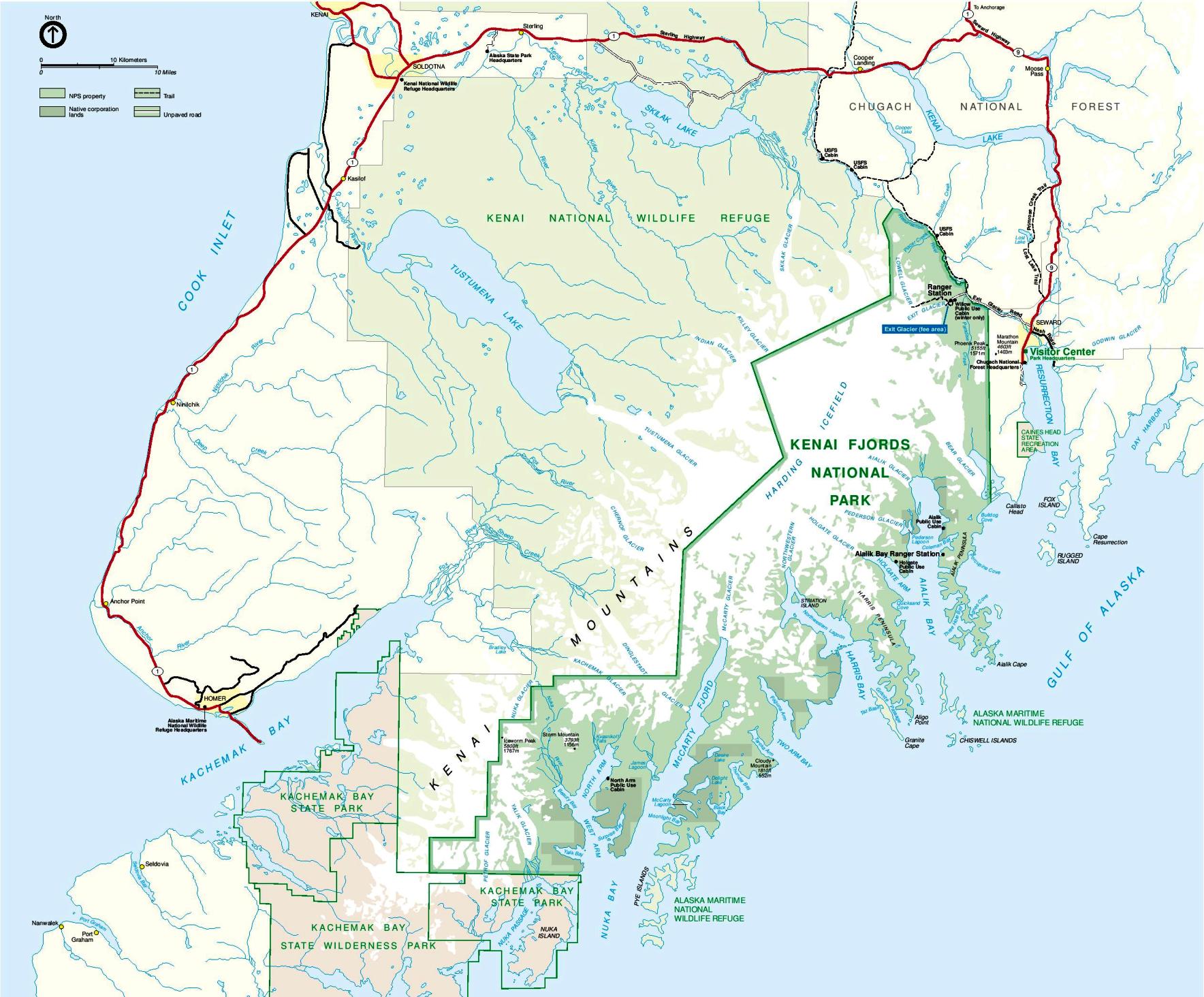 Flora –
In this park, the maritime climate and sudden glacier-carved peaks of the Kenai fjords allow it to host a wide range of plants. The sheer cliffs, jagged peaks, and steep valleys of the ice-carved landscape create huge variations in habitat and plant communities over short distances. Lush, highly productive temperate rainforests lie less than a mile or two from nearly desolate mountain ridges that support only a thin layer of alpine vegetation.
Kenai Fjords National Park is a truly dynamic place. Some of the changes are natural. Others don’t. As glaciers retreat from the last ice age, plants colonize new areas and ecosystems grow and change through ecological succession. Anthropogenic climate change is accelerating this process and humans are further modifying the natural order by introducing invasive plants. The plants of the Kenai Fjords are in slow evolution thanks to which to see the forces of nature are at work, remaking the landscape and its inhabitants also due to the growing role of human interference that is modifying the natural world.
The plant communities in the park are in fact shaped by the retreat of the glaciers. The first plants to appear on the almost soilless stones are lichens and mosses. Then some very hardy flowering plants like dwarf fireweed and yellow dryas appear. These pioneer plants are followed by others capable of fixing nitrogen such as green alder, in this way the soil is further enriched. Willows and alders are then followed by poplars and Sitka spruces (North American spruce). At this point a rich undergrowth of various shrubs is also formed (Alaskan blueberries, elderberry, red goat’s beard, various types of lilies and female fern). This more or less at sea level; at higher altitudes the conditions become more difficult. The tree line in the park is located between 230 – 300 m a.s.l.

Fauna –
Kenai Fjords National Park is home to a variety of land mammals including the Alaskan wolf, North American porcupine, Canadian lynx, brown bear, American black bear, Alaskan moose and goat. Mountain. Small mammals such as the coyote, the American beaver and the North American river otter. Marine mammals are the sea otter, the common seal and the Steller’s sea lion. The following cetaceans have been spotted in the park’s waters: orca, fin whale, humpback whale, Dall’s porpoise and slanted-toothed dolphin (a Pacific dolphin). In addition, many birds nest in the various areas of the park such as: the bald eagle, the peregrine falcon, the black magpie, the Steller’s jay. While the sea birds are: the puffin, the common uria and the marbled uro.
The variety and adaptability of the Kenai Fjord creatures are amazing. The birds here are considerably better at swimming with their wings than at using them in the air. Whales take flying lessons, and black bears enjoy skidding without gear along the steep snow slides. It seems almost magical, but it is only nature in its most enterprising form, adapting to local extremes.
A total of 191 bird species have been documented in the park, and many pelagic (open sea) birds can be found in the waters or nesting on or near the park.
The following land mammals can be found in Kenai Fjords National Park: black bear, brown bear, beaver, coyote, mountain goat, river otter, snowshoe hare, small brown bat, lynx, hoary marmot, marten , mink, elk, hopping mouse, northern swamp lemming, porcupine, shrew (5 species), red squirrel, vole (4 species), short-tailed weasel, gray wolf and wolverine.
Marine mammals living in the waters and on the coast near Kenai Fjords National Park include: sea otter, Dall’s porpoise, porpoise, Steller’s sea lion, harbor seal, orca (orca), fin whale, gray whale , humpback whale, minke whale and six whale.
Unfortunately, the following marine mammals that are on the U.S. Fish & Wildlife Service’s list of threatened or endangered species are endangered: humpback whale, six whale, gray whale, and Steller’s sea lion.