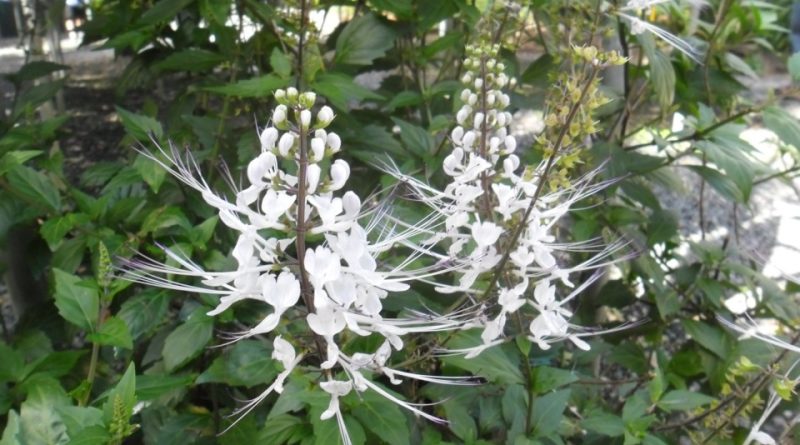 Etymology –
The term Orthosiphon comes from the Greek ὀρθός orthós straight, erect and from σίφων síphon tube, canal: reference to the tube of the corolla.
The specific epithet aristatus means endowed with reste, from arista remains of the ear: due to the presence of organs terminated by a remainder or a thin tip. 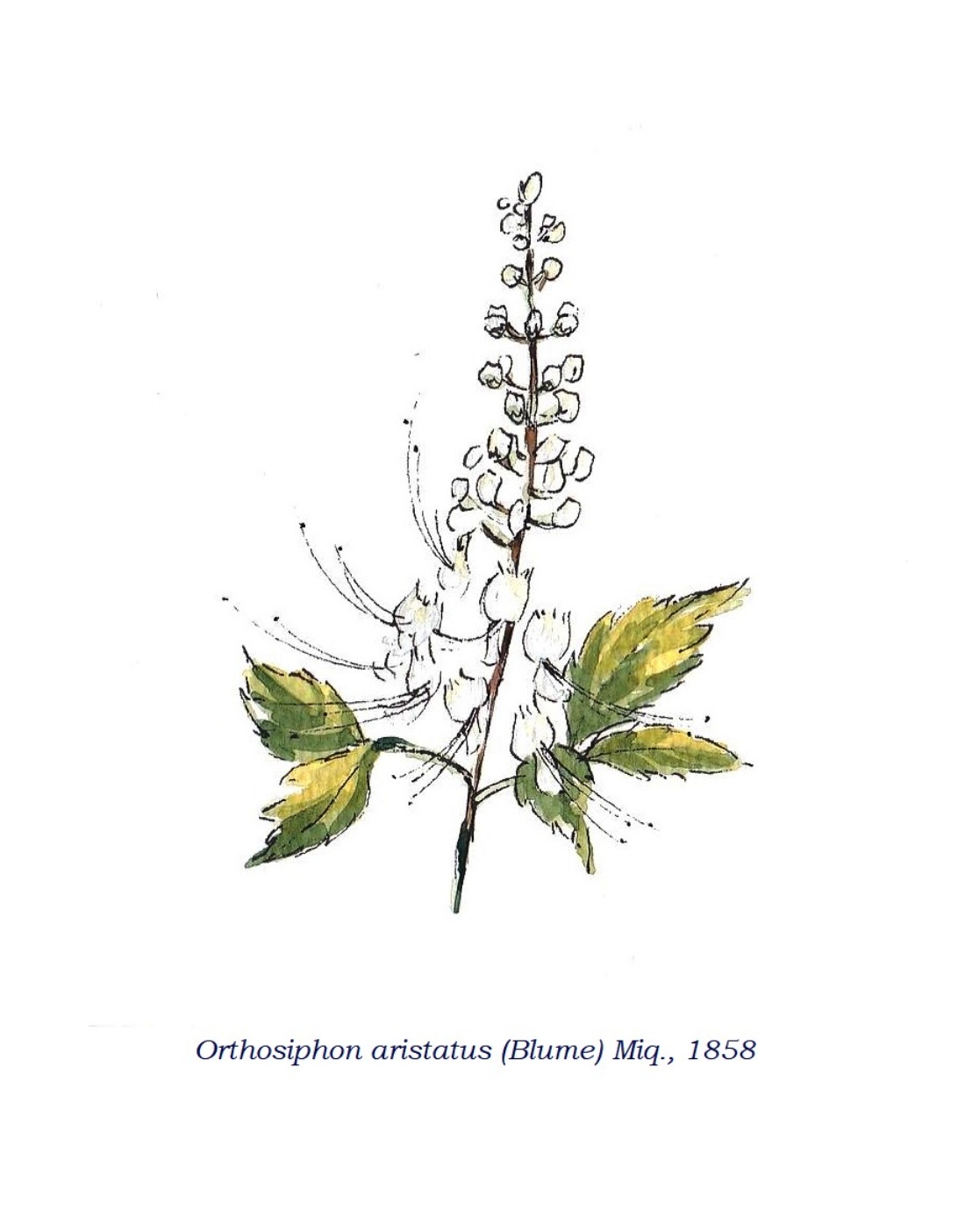 Description –
Orthosiphon aristatus is a perennial herbaceous plant that can reach 80 centimeters in height.
The leaves are toothed opposite with abundant hair and rest on a short petiole.
The flowers are small and tubular, white or lilac in color and are united in oblong clusters and have long, particularly protruding stamen filaments. These special filaments are the main feature of the plant and, given their similarity to the cat’s whiskers, are the reason why the plant is called by the common name “cat whiskers” in several languages.

Cultivation –
Orthosiphon aristatus is a plant whose leaves are a popular remedy, used alone and also in combination with various other herbs. The plant is grown for its medicinal uses and is sold in quantities in various countries, especially in Europe.
It is also sometimes cultivated as an ornamental plant.
This plant has escaped cultivation and has naturalized in some areas of the world.
Harvesting usually begins 8 – 10 weeks after planting, at the beginning of flowering. Every 2 – 3 weeks the 4 – 10 upper leaves of the shoots are plucked by hand.
Annual yields of dry leaves amount to 1,500 kg / Ha.
Smallholders usually dry the leaves in the sun. Artificial drying is practiced on larger farms. To obtain a high quality product, the leaves are first withered in the air and then dried at 45 – 50 ° C. The dried leaves of good quality are green in color (the presence of a blackish color is due to overheating or contact with metal containers), have a good aroma, a moisture content of less than 14%, a bitter taste, a content of ashes of about 10%, a contamination content of less than 2% and do not contain insects or fungi.
There are three (according to other authors two) cultivars of Orthosiphon aristatus: one with blue-violet flowers and two with white flowers. The white-flowered cultivar with reddish stems, petioles and veins seems to have the best for diuretic qualities.
The plant propagates by seed or by stem cuttings, 15 – 20 cm long, which have some buds.
Cuttings are usually planted in the shade, with 40 – 60 cm between plants and rows. Often 4 – 6 cuttings are placed in one hole.
Sowing takes place directly in the field and can be done all year round, but the usual sowing period is at the beginning of the rainy season. For plantings, planting in the nursery is preferred for a period of 45 days with the cuttings placed vertically with only one shoot visible.

Customs and Traditions –
Java tea is also known by names that mean cat whiskers, kumis kucing in Indonesia, misai kucing in Malaysia and even cat’s whiskers in English-speaking countries.
This plant is used in herbal medicine especially as a diuretic, in which case it must be taken ensuring an abundant supply of liquids. The dosage should be appropriately adjusted if it is taken simultaneously with diuretic or cardiovascular drugs. It is also used as an anti-allergenic, anti-hypertensive and anti-inflammatory, purifying, anti-bacterial, cholagogue (facilitates bile secretion towards the intestine) and mild antispasmodic. It is used to prevent gout, hypertension, rheumatism, cystitis, urinary tract stones, liver, kidney and urinary bladder problems. It is contraindicated for those suffering from cardio-renal insufficiency.
Orthosiphon aristatus is a popular herbal remedy in Southeast Asia and is also commonly exported to Germany and various other countries. Research has confirmed the presence of a number of medically active compounds and also the diuretic action of the leaves.
The leaves contain flavones (including sinensetin), saponins, a glycoside (orthosiphonin), an essential oil and large amounts of potassium (which is largely responsible for the diuretic effect).
In a test with healthy volunteers in Thailand, plant extracts increased the excretion of citrate and oxalate. Although a higher level of oxalate can increase the risk of kidney stones, the increased production of citrate helps prevent stone formation.
Java tea has been shown to have antimicrobial properties. The aqueous extracts greatly inhibited the growth of both gram-positive and gram-negative bacteria. Saponins may play a role in bacteriostatic activity in vitro. Even the derivatives of caffeic acid (which represent up to 95% of the phenolic substances present in a hot water extract) can be responsible for the antibiotic activity.
Lipophilic flavonoids, of which sinensetin and tetramethylscutellarin are the most abundant and have shown in vitro an inhibitory effect against Ehrlich ascites tumor cells.
Furthermore, these flavonoids may be partially responsible for the anti-inflammatory effects, as flavonoids are inhibitors of cyclooxygenase and lipoxygenase.
Raw grass is said to cause vomiting.
The leaves which, as mentioned, are strongly diuretic are believed to increase the ability of the kidneys to eliminate nitrogen-containing compounds. They are used in the treatment of kidney infections, kidney stones and poor kidney function due to chronic nephritis.
They are also used in the treatment of cystitis, urethritis and gout.
These are used in combination with other plants such as Sonchus spp or Barleria spp, to stimulate the kidneys and as a medicine for nephritis, gallstones and diabetes.
In combination with the leaves of Blumea balsamifera and Phyllanthus fraternus, plus the rhizomes of Curcuma xanthorrhiza, the leaves are used to treat jaundice.
Combined with the leaves of Andrographis paniculata, they are used to treat diabetes.
In mixture with the leaves of other plants, they are also used against gout, rheumatism and arteriosclerosis.
Finally, from an ecological point of view, Orthosiphon aristatus is used in landscaping to attract bees, butterflies and hummingbirds to its nectar.

Preparation Method –
In Java, the leaves and stems of Orthosiphon aristatus and other species of Orthosiphon are dried with the same process used for the production of tea, thus obtaining Java tea to be infused.
Other types of administration that are on the market are in capsules, powder and mother tincture, prepared with drying and a hydro-alcoholic solvent at 68 °.