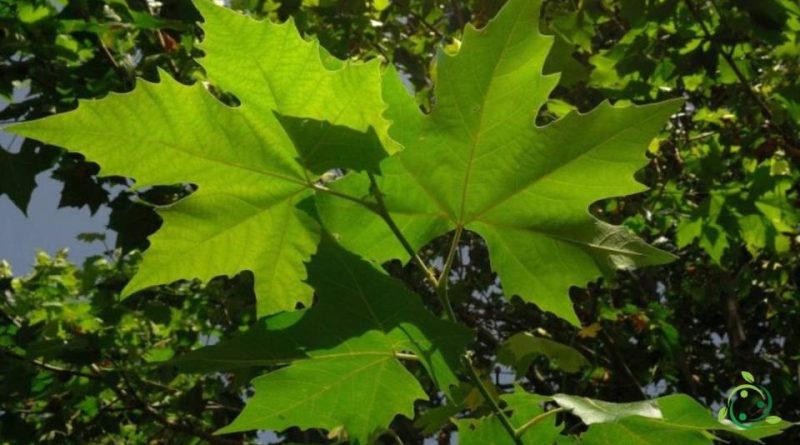 How the London plane is grown

The London plane or London planetree or hybrid plane (Platanus acerifolia L., 1753), of which it is also synonymous (Platanus × hispanica (Mill. Ex Münchh., 1770) is a hybrid between Platanus orientalis and Platanus occidentalis.
The species was formed from a 17th century hybridization between P. orientalis and P. occidentalis, planted one near the other.
According to some authors this hybridization originated in Spain, while according to others it would have taken place in the Vauxhall Gardens in London where John Tradescant the Younger discovered the plant in the mid-17th century.
However, it is believed that it was present in Great Britain as early as 1663 and before 1670 it was cultivated in the botanical garden of Oxford.
This plant has flowers that are gathered in racemes and pollination is anemophilous; flowering occurs in April – May.
The fruits are spherical, carried on very long peduncles and gathered in racemes. These ripen in autumn and disintegrate in winter; the achenes move away from the plant by means of the wind (anemocoria) thanks to the tufts that support them.

Cultivation –
The London plane is a plant that is particularly resistant to both pollution and root compression, which is why it became particularly popular in large Victorian-era English cities. In fact, it tolerates cold much better than P. orientalis and is much less susceptible to anthracnose than P. occidentalis.
In addition, the plant is also resistant to the wind, although it presents problems in its planting in the city: the hairs with which the fruits are covered can be irritating if inhaled and can exacerbate breathing difficulties for people with asthma. The leaves are also particularly resistant and can take up to a whole year to rot on the ground.

The plant prefers sunny exposures, even if they develop without problems in any condition; they also grow in complete shade. It is also a cold-resistant plant.
For its plant it is necessary to choose areas with good availability of space and, moreover, to know that it prefers deep and fertile, fresh and well-drained soils, even if it adapts to all soils even strongly calcareous.
As for water supplies, the plant is usually satisfied with the rains, although it is good to water the very young specimens in the hottest and driest months of the year, to ensure that they can develop properly.
For the multiplication, cuttings can be made in autumn, while in spring it is possible to propagate the common plane tree by seed. However, it is also possible to take the basal suckers which develop in large numbers; for the first few years, the small plants are often subject to numerous diseases, so it is good to spray them with broad-spectrum fungicides to avoid their onset.
The plant also has a high resistance to water stagnation and also tolerates pruning operations well.

Uses –
Platanus acerifolia is very rustic and resists pruning well, which is why it has replaced other plane trees for ornamental purposes. It is also used in carpentry for turned items, furniture and common items.
It is often used in agricultural environments along the ditches for coppice hedges. Grown as a shade plant in the city along avenues and squares. Also for road trees. In parks and gardens as an isolated specimen, in groups or to create woodland areas.