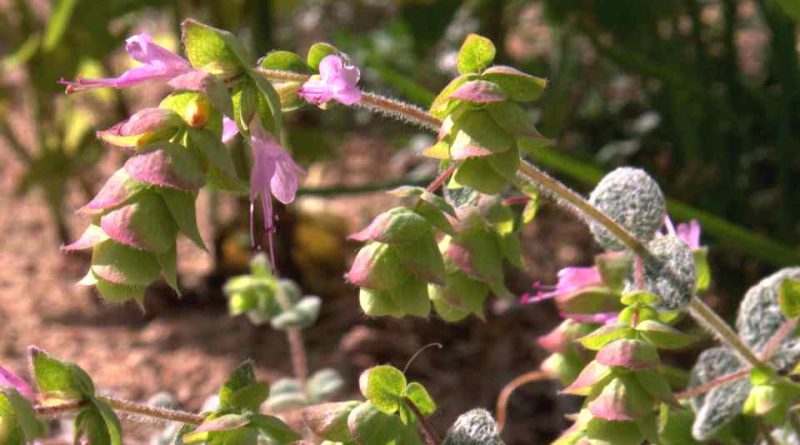 The Dittany of Crete (Origanum dictamnus L.) is a shrub species belonging to the Lamiaceae family.

Etymology –
The term Origanum comes from the Greek ὄρος óros monte and from γάνος gános showy beauty, pleasure: splendor of the mountain, reference to the natural habitat.
The specific epithet dictamnus comes from the Greek τίκτω tíkto give birth and from θάμνος thámnos shrub: because it was believed that these plants facilitate childbirth.

Geographic Distribution and Habitat –
Origanum dictamnus is a rare plant, native to the Greek island of Crete, where it is cultivated in the central and mountainous region, and present in southern Europe.
Its original habitat is that of rock formations in shady areas, in arid and high mountain places on the island of Crete, with an altitudinal distribution ranging from 300 to 1,500 meters above sea level. 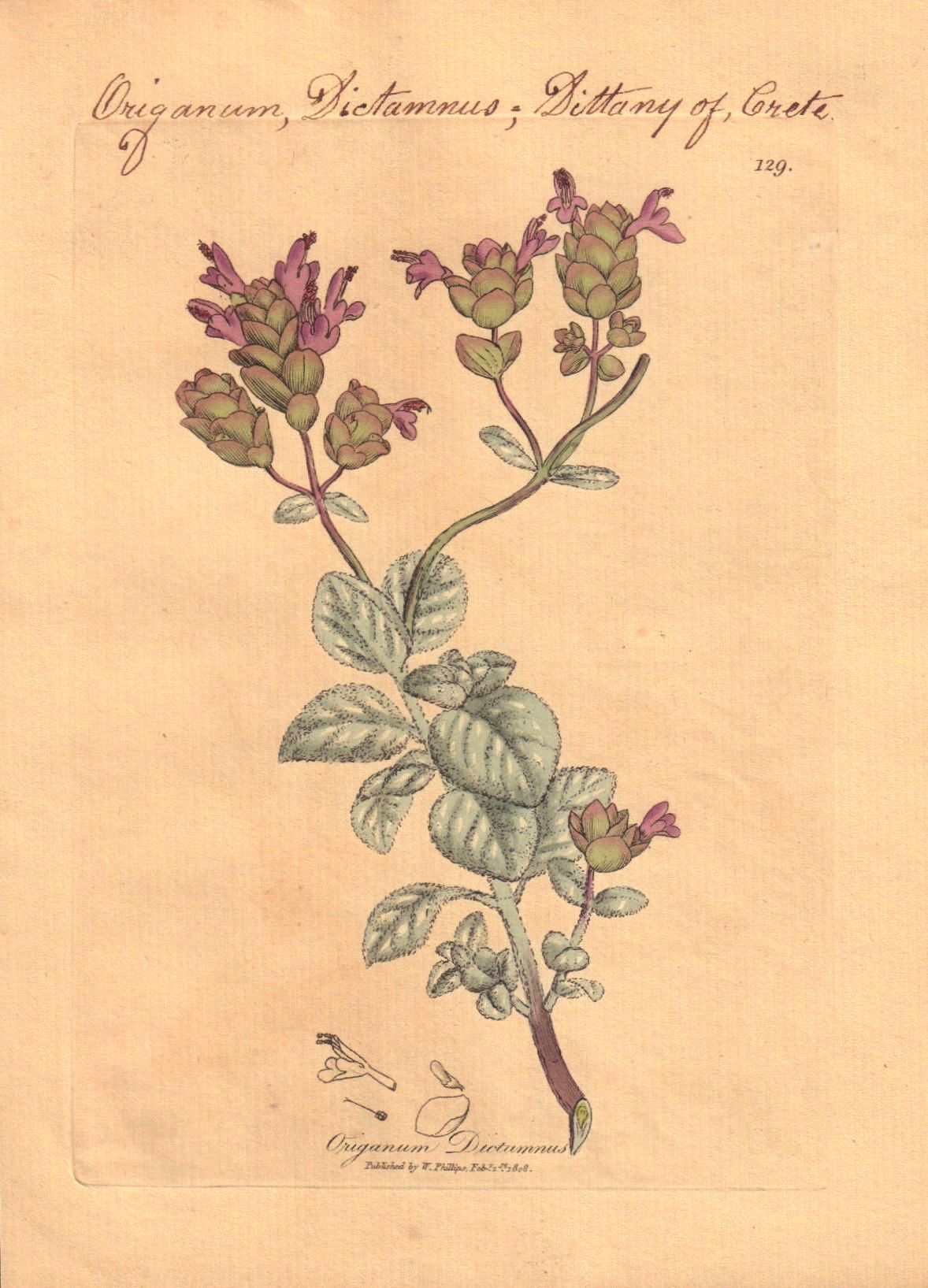 Description –
The Dittany of Crete is a perennial plant with a shrubby habit that can reach 30 cm in height.
The stems are woody and bear small silvery, velvety, rounded and fluffy leaves. The leaves bear on their surface some glandular hairs in which the essential oil is produced.
The pinkish flowers are carried in spike inflorescences and hang downwards.
Flowering is from May to August.
The grains are rare and the plant is grown by cuttings.

Cultivation –
Origanum dictamnus is a perennial herb that has edible and medicinal uses. The plant is widely cultivated as a culinary herb in the eastern part of the island of Crete.
In its natural state it grows in rocky areas at a height from 300 to 1500 m s.l.m. with very sunny exposure and can resist up to -10 ° C.
For its cultivation, the plant requires a rather dry, warm and well-drained soil, but it is not demanding as regards the type of soil and thrives on chalky soils.
From a pedological point of view, however, it prefers slightly alkaline soils.
Propagation can be done by seed which is sown in early spring in pots or in the open field. Germination usually occurs within 2 weeks.
It can also be propagated by division, in early spring or early autumn. Larger divisions can be planted directly in their permanent locations.
Finally, basal cuttings of sterile young shoots can also be prepared in the period of early summer. In this case the shoots with abundant underground stem must be collected when they are about 8 – 10 cm from the ground; these should be placed in individual pots and kept in the shade in a shaded area until they root well. The transplant must then be done in the summer.

Customs and Traditions –
The Dittany of Crete is a plant with an ancient streak of use for both medicinal and food use.
In Greece it is called Δίκταμο (díktamo) and in the Cretan dialect Έρωντας (erontas or erodas, “love”), Στοματόχορτο (“grass for the stomach”) or μαλλιαρό χόρτο (“woolly grass”), Στατατο “grass”.
The first depictions of the dictamus date back to 1500 BC. and are found in a fresco located on the wall of a Minoan palace.
This plant was already known to the peoples of ancient Greece and Egypt, where it was exported, for its medicinal virtues. It was the first antiseptic for external use mentioned in Linear B tablets dating back to 1300 BC.
In the work Nature of the women of Hippocrates it is recommended to “drink a penny of a Cretan dictamus in water to cause the departure of the còrio and the rules”.
Ancient medical literature prescribes the infusion dictamus for stomach pains, intestinal problems, high-risk pregnancies and painful menstruation. In external use it acts as an antiseptic and coagulant.
Aristotle in his History of animals in chapter VII writes “It is believed that the wild goats of Crete, when they are hit by an arrow, start looking for the dictamus that seems to have the property of making the iron come out of the wound” [4].
In the XII book of the Aeneid, Virgil describes the extraction of an arrow and the use of the dittamus as an antiseptic.
Dioscorides described the use of the dictamus in De materia medica.
William Turner, the father of English botany, described it in the 16th century: a plant that never wanted to grow but which is available from apothecaries in Venice and Antwerp.
It is one of the plants whose cultivation is recommended in the royal domains by Charlemagne in the Capitulare de villis (late 8th century or early 9th century).
In the Middle Ages the dittamus was part of the gifts of the fiancés of the Cretan ladies. According to the Cretan tradition, young men who wanted to get married had to climb the steep cliffs of Monte Ditte to pick it up and offer it to their future bride.
This plant is mentioned in mythology. The Greek goddess Aphrodite heals the wounds of her son Aeneas with her dictamus. She herself heals with the dictamus to facilitate her own pregnancy when she is pregnant with Hermaphroditus on Mount Ida of Troas.
Zeus, king of the Olympians, was saved from certain death by his mother, Rhea. She gave birth in Crete in a cave of Monte Ditte, protected by the Curetes, where she hid her son. In thanks, Zeus offered the Cretan the dittamus.
In ancient times the dittamo was called “artemidion” in honor of the goddess Artemis (Diana for the Romans), who if she wanted she could heal the wounds inflicted by her arrows.
The Cretan goddess of childbirth, Eilytheiia, (Ειλυθειία) wore a dictamus crown, a direct link between the plant and childbirth.
In addition, the dictamus has been used since ancient times as a divinatory incense and to see spirits.
Beyond mythological and historical evidence, Origanum dictamnus is a plant that, even today, is used for both edible and medicinal uses.
The leaves are used to flavor salads and vermouth and have a pleasant aromatic flavor, especially when mixed with parsley, thyme, garlic, salt and pepper.
The flowering tops are dried and transformed into an herbal tea.
Its medicinal properties are exploited by the flowering plant which has been used as an antirheumatic, oxytocic, stomachic and vulnerary, even if these uses seem obsolete in modern herbal medicine.
An extract from the aerial parts of the plant showed significant activity against Leishmania donovani, one of the organisms that cause the parasitic disease leishmaniasis. Related species contain triterpenes, ursolic acid and oleanolic acid, compounds previously identified in the Greek Lamiaceae and recently shown to have strong activity against Leishmania species.
Dictamus, like oregano, has antiseptic properties.
In Greece it is used in the form of an infusion to treat colds, infections of the mouth and teeth, digestive problems, menorrhoea, diabetes, obesity, kidney and liver problems.
It is also applied as a poultice for head pains, rheumatism and sores.
From this plant an essential oil is obtained which has the following active ingredients:
– camphor: stimulant, decongestant, antiseptic, antispasmodic;
– carvacrol: analgesic, anti-inflammatory, antiseptic, bactericidal, expectorant, fungicide, vermifuge;
– cedrol, linanol, p-cimolo, pinène: bactericidal, expectorant, fungicidal;
– tannin: bactericidal, antiviral, antiulcer, antitumor.
Another study points to different components, such as:
– carvacrol, thymol: antioxidants;
– paracymen: analgesic, bactericidal, vermifuge;
– γ-terpinène: insect repellent.
Furthermore, a 2007 study highlights the anticarcinogenic properties of ursolic acid contained in the leaves of the dittamus.
Among the other uses of this plant it should be emphasized that its essential oil is used in the making of dry martini, vermouth and in cosmetics.
Today Origanum dictamnus is protected and its collection regulated by the laws of the European Union. It is also sometimes confused with the white dittamus, a xerophilous herbaceous plant of the Rutaceae family.

Preparation Method –
The Dittany of Crete is a plant of remote use for both food, medicinal and esoteric purposes.
In the food sector, the leaves are used to flavor salads and vermouth and have a pleasant aromatic flavor, especially when mixed with parsley, thyme, garlic, salt and pepper.
For medicinal purposes, the flowering tops are dried and transformed into a herbal tea.
An essential oil is also obtained from this plant which, as mentioned before, demonstrate particular healing properties.