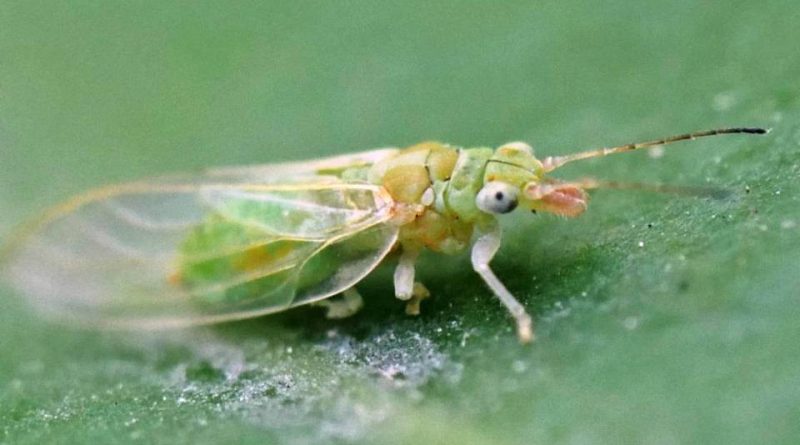 The Red gum lerp psyllid (Glycaspis brimblecombei Moore) is an insect belonging to the Psyllidae family.

Geographic Distribution and Habitat –
The Red gum lerp psyllid is an insect native to Australia; the first reports occurred in Europe in the Iberian Peninsula in 2009 and, subsequently in Italy in 2010 in the Campania Region and Lazio. During 2011, the presence of the insect in central Italy and Sardinia took on considerable dimensions and is assuming the character of a phytosanitary emergency for eucalyptus.
The host plants of this insect is the Eucalyptus. Eucalyptus camaldulensis is the host of choice of G. brimblecombei, although in Australia it is reported on as many as 137 species of the Eucalyptus genus.

Morphology –
The Red gum lerp psyllid is an easy to identify insect as it tends to form visible colonies by means of the typical wax follicles, called lerps, which are secreted by nymphs and nymphs for protective purposes and which stand out for their white color. These are presented in a sub-conical shape and, when fully developed, can reach 3 mm both in diameter and in height.
By lifting the lerps it is possible to observe the yellow-orange nymphs or the reddish orange nymphs with dark brown wing cases.
Adults, which have a limited longevity of 3-10 days, are mobile and do not live protected by the follicles. They are about 3 mm long and are light green on the head, mesothorax and abdomen. The thorax, dorsally flattened, presents to the prothorax and mesothorax a coloration of alternating light yellow and orange bands. The front wings are membranous and with sub-parallel margins. On the head there are the characteristic and extremely developed frontal cones.

Attitude and Life Cycle –
The insect in our climates can produce from 2 to 4 generations.
The species, with heterometabolous development, has three neanidal and two nymph stages while the adults have a limited longevity of 3-10 days.
The adult, winged forms allow the Glycaspis brimblecombei to spread to considerable distances and thus expand the areas of infestation.
When the female has reached maturity, it lays yellow-orange eggs arranged spatially in an arc and anchored by means of a short peduncle generally on the underside of the leaf.
Eggs typically hatch 7-10 days after laying.

Ecological Role –
It has been observed that, in outbreaks of infestation, the insect develops on adult foliage and on the buds of the year.
This insect feeds on the phloem sap, producing large quantities of very viscous honeydew that smears the foliage and on which the fumaggini subsequently develop. In the presence of high insect populations, an early phylloptosis was also recorded.
In addition to the ecological contraindications, the use of chemical control is impossible in urban centers for obvious reasons relating to public health.
In the agricultural environment, however, the practice is very expensive and of dubious economic validity; furthermore, there are currently no products authorized for this purpose.
As regards the natural control in the areas of origin of the species and in those of new colonization, numerous species of generalist entomophages have been identified which evolve in the colonies of Glycaspis brimblecombei. These include spiders, wasps, ladybirds, hoverflies, chrysopes and anthocorids.
Recent observations, conducted above all in Campania and Lazio, have actually revealed the presence of some predatory species and in particular it should be emphasized a significant containment activity by Anthocoris nemoralis Fabricius and Vespula sp. borne by the colonies of this insect. A. nemoralis carries out its control action on all preimaginal stages of G. brimblecombei. In the literature, the potential efficacy of this antagonist has also been reported for other environments. The wasps, in addition to feeding on honeydew, raise the waxy follicles to prey on the underlying forms. On the other hand, as regards the presence of indigenous parasitoids affecting the development stages of G. brimblecombei, no parasitic activity has so far been observed in the sampled locations.
It is also reported that among the known natural enemies of G. brimblecombei, the specific parasitoid Psyllaephagus bliteus Riek, has been successfully used in classical biological control programs, which have seen its introduction from Australia in the areas of neo-colonization. of California, Brazil, Mexico and Chile.
The growing percentage of parasitization recorded in some areas a few years after the introduction of the entomophagus suggests a positive outcome of the biological control of this psyllid.
The studies launched in the Italian areas aim, in addition to describing the phenology of G. brimblecombei in our latitudes, to evaluate the impact of natural antagonism by indigenous entomophages. In the event of insufficient natural control, the advisability of introducing the specific parasitoid P. bliteus in Italy should also be considered.