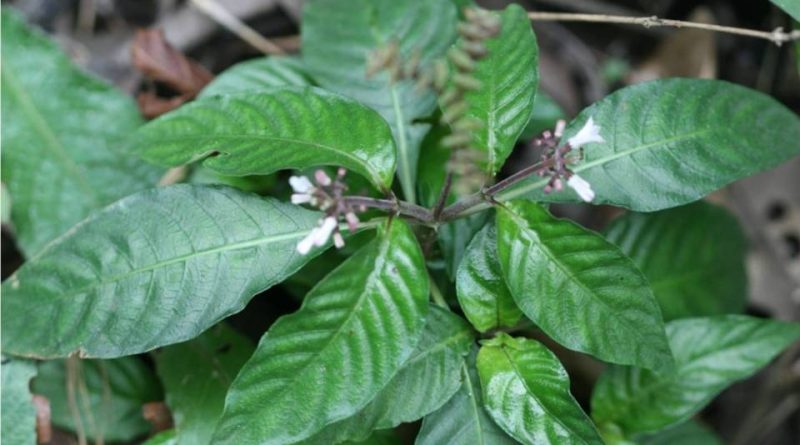 Sarhati (Ophiorrhiza mungos L.) is a herbaceous species belonging to the Rubiaceae family.

Etymology –
The term Ophiorrhiza should come from the union of the two Greek words ὄϕις ofio, snake and ῥίζα rhiza, root: hence snake root.
The specific mungos epithet has the same etymology as the mongoose and is based on the story that the mongoose eats this plant when bitten by a snake; however, its anti-snake activity is unfounded.

Geographic Distribution and Habitat –
Ophiorrhiza mungos is a plant native to India and present in a vast area of ​​East Asia which includes: southwestern China, India, Sri Lanka, Bangladesh, Myanmar, Thailand, Vietnam, Malaysia, Indonesia.
Its habitat is that of the primary and secondary forest, in humid locations; at altitudes up to 400 meters. 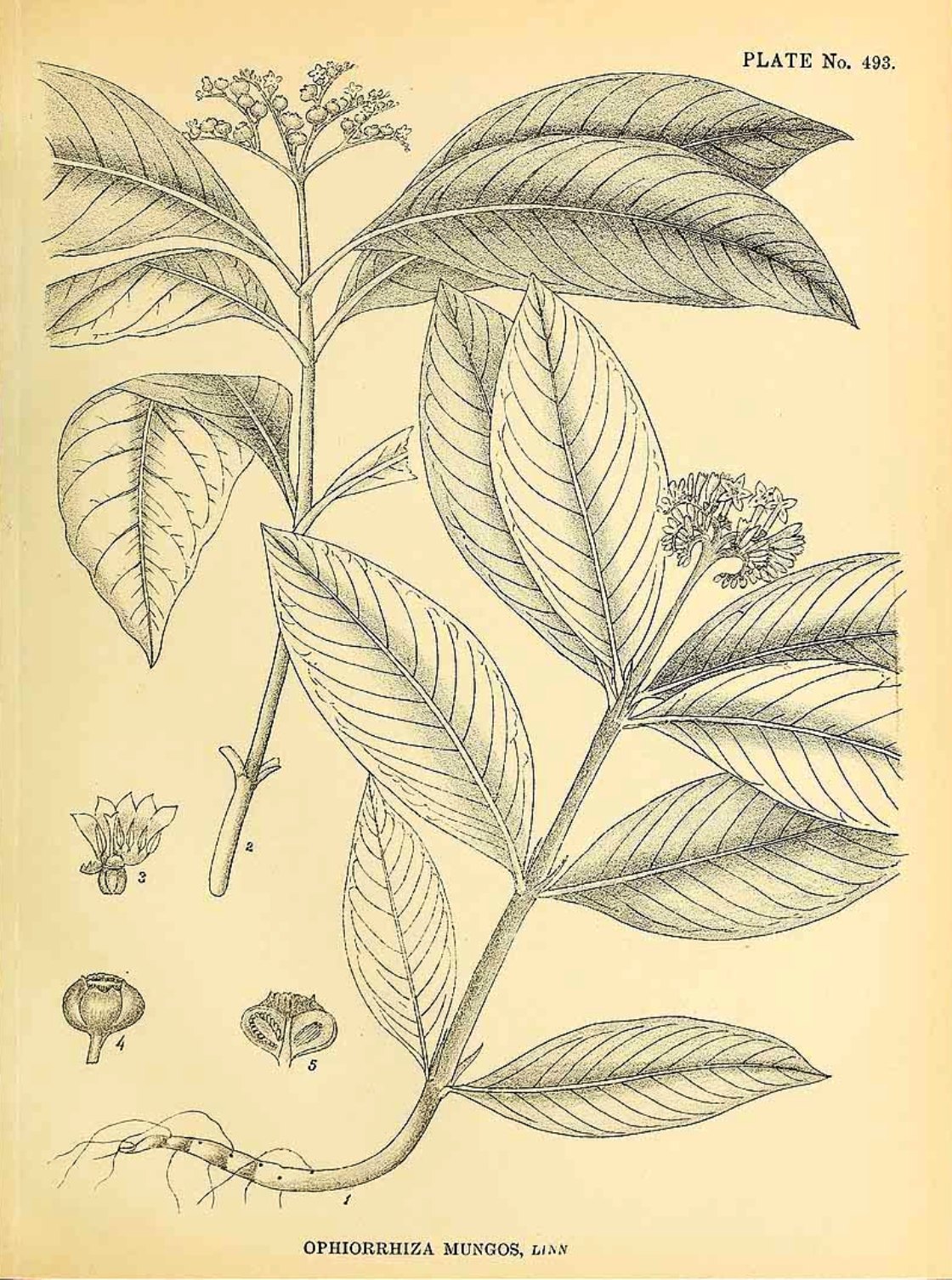 Description –
Ophiorrhiza mungos is an erect herbaceous plant, growing up to 10-50 (-80) cm in height.
The leaves are narrow to lanceolate in shape, 4-12 cm x 2-6 cm with a pointed base and apex. The petiole is 8-25 mm long; the stipules are 4-5 mm long.
It has a flat top, 2-12 cm in diameter, with sub-umbellate branches.
The flowers have white petals, with a 7-8 mm long pollen tube, short, obtuse and keeled lobes. The fruit is a capsule 2-3 mm long with 6-8 mm in diameter.

Cultivation –
Ophiorrhiza mungos is a plant that is harvested in nature for local use as a medicine.
This plant is found mostly in its natural state in humid locations in the undergrowth and at altitudes of up to 400 meters.
It can be grown in similar habitats and propagated by seed.

Customs and Traditions –
Ophiorrhiza mungos is a plant called in different ways in various languages ​​depending on the areas where it grows; named after Sarhati (Hindi), Patalagaruda (Kannada), Sarpakshi (Sanskrit), Avilpori, Chembajarinjil, Pera-aratha (Malayalam)
It is a plant that is used in Ayurvedic medicine, where it is used against diarrhea, snake bites, anger, dyspepsia, cancer. Both roots, leaves and bark are used.
In general, the root bark appears to be laxative and sedative.
The roots are very bitter and are official products in French and Spanish pharmacopoeias. They are applied as a cancer treatment and are also widely known in Malaysia for the treatment of snake bites, although this is incorrect. This misunderstanding seems to be based on its similarity to the Rauvolfia serpentina.
The decoction of leaves, roots and bark, which is bitter, is tonic and stomachic.
The plant is used as a poultice to keep the skin moist and soft.
In India, a decoction of leaves, roots and bark is transformed into a bitter and stomachic tonic.
The aerial parts of the plant contain several alkaloids, including camptothecin and 10-methoxycamptothecin.
In limited studies, camptothecin has shown broad-spectrum antitumor activity, but its toxicity and poor solubility have caused several problems.
Camptothecin has also been shown to have potentially useful activity against pathogenic protozoa such as Leishmania donovani and Trypanosoma brucei, which cause leishmaniasis and sleeping sickness, respectively.
Natural 10-hydroxy-camptothecin is more active than camptothecin and is used in China against neck and head cancers.
More promising are the 9-amino-camptothecin analogs and several semisynthetic derivatives. These compounds have been tested in clinical trials and show good responses in a range of cancers, including colon, lung, ovarian and cervical cancers.
Both camphothecin and 10-methoxycamptothecin also possess anti-virus activity against the Herpes simplex virus.
Among other uses, it should be remembered that a paste obtained from the scrapings of the stem is used in the production of sheaths and guitars.

Preparation Method –
Of the Ophiorrhiza mungos both the roots, the leaves and the bark are used.
Bitter flavor decoctions can be prepared using both leaves, roots and bark with tonic and stomachic properties which is used in various countries such as in India.
A poultice can be prepared from this plant to keep the skin moist and soft.