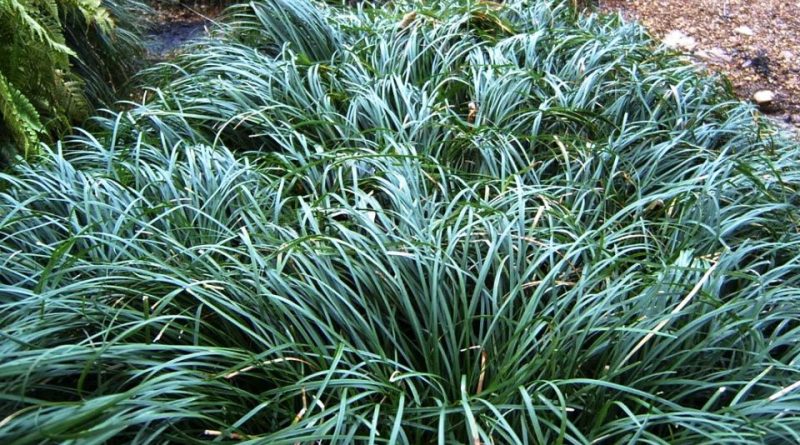 Etymology –
The term Ophiopogon comes from the Greek ὄφις óphis serpent and from πώγων pógon barba: probable reference to the long and thin leaves.
The specific epithet japonicus refers to the origins or presence of a species in the Japanese territory.

Geographic Distribution and Habitat –
Ophiopogon japonicus is a plant native to East Asia and present in China, India, Vietnam, Japan, the Philippines and Korea.
Its habitat is that of shady places, in the woods, in the thick spots of the ravines, on the slopes and along the streams and rocky areas at altitudes from 200 to 2,800 m in China. 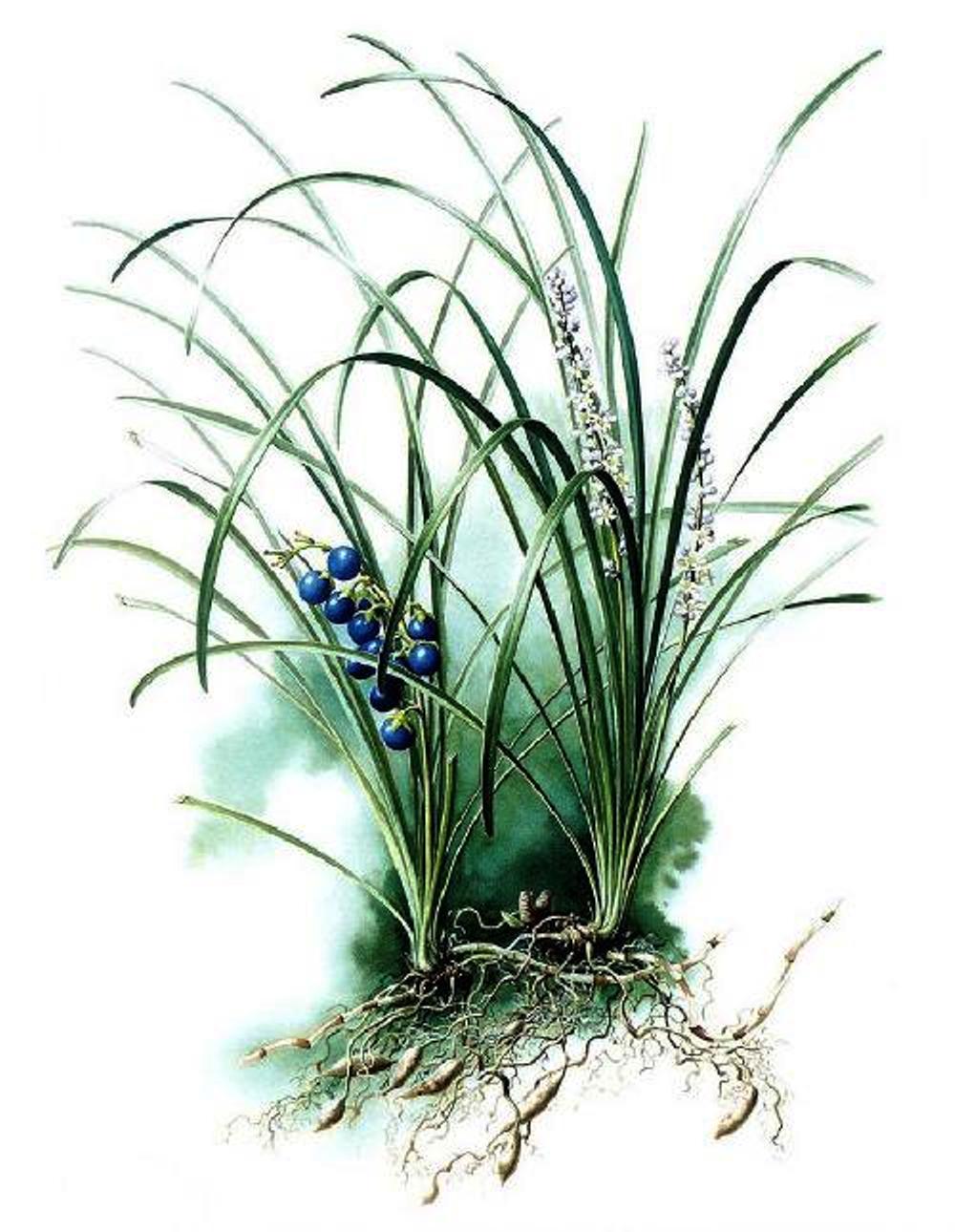 Description –
Ophiopogon japonicus is an evergreen perennial that tends to form bushes that have large stolons with tuberous roots underground.
The leaves are linear, 20-40 cm long.
The flowers are white to pale lilac, carried in a short raceme on a 5-1 cm stem.
The fruit is a blue berry, 5 mm in diameter.

Cultivation –
Ophiopogon japonicus is grown as an ornamental plant, providing excellent soil cover.
For this purpose, several cultivars have been selected, including “Albus” (white flowers), “Compactus” and “Kyoto Dwarf” (dwarf forms, no more than 4-5 cm tall) and “Silver Mist” (variegated, with leaves streaked with white).
It is often sold as a decorative plant for freshwater aquariums, but because it is not a true aquatic plant, it can live for a few months under water before dying. Although it is resistant to temperatures of about -20 ° C when it is dormant outdoors in the winter, when kept completely submerged, it requires water temperatures of 18-25 ° C.
The plant grows well in full sun or partial shade.
Propagation occurs from lateral shoots.

Customs and Traditions –
Snake’s Beard, called in Japanese ryu-no-hige (“dragon’s beard”) or ジ ャ ノ ヒ ゲ ja-no-hige (“snake beard”) is a plant that is used for healing purposes in Chinese medicine, against nausea, vomiting, constipation and intestinal lubrication.
In traditional Chinese medicine, both plants and tubers of O. japonicus are known as mai men dong (Chinese: 麥 門冬). The tubers are used as a cardinal herb for yin deficiency.
According to the Chinese Herbal Medicine Materia Medica, the herb is sweet, slightly bitter and slightly cold; enters the canals of the heart, lungs and stomach; nourishes the yin of the stomach, spleen, heart and lungs; and clears the heat and calms the irritability.
The plant is often grown in gardens as an ornamental species to give good ground cover. This species is grown as a medicinal plant in China.
Among the edible uses, the root is used which according to some is bitter, according to others it is sweet and aromatic.
The root contains about 1.6% of proteins, 0.5% of fats, 80% of carbohydrates, 2.3% of ash.
In medicine, the root is antitussive, aphrodisiac, expectorant, pectoral, sedative, scialagoga, stomachic and tonic.
It is also said to have anticancer activity.
The root is used internally in the treatment of a variety of conditions, including dry cough, fever, thirst, sore throat, tuberculosis, dry constipation, insomnia, anxiety, and palpitations.
It is also frequently used in diabetes mellitus treatments.
Furthermore, the roots have been shown to have an antibacterial action, inhibiting the growth of Staphylococcus, E. coli, Bacillus subtilis, B. typhi, etc.
The whole plant is antipyretic, antiscrofulatic, antitussive, emollient, expectorant and tonic. It also lowers blood pressure.
The nodules on the fibrous roots are used as a nutritional tonic in the treatment of tuberculosis.
Other uses include agroforestry as it is a good plant to form anti-erosion mats and which spreads quite freely; it is commonly planted as a ground cover or as a substitute for low maintenance lawns.
In this sense it is particularly valuable for preventing soil erosion. For these purposes the plants should be spaced approximately 45 cm from each other.

Preparation Method –
Ophiopogon japonicus is a plant that has been used for some time mainly for medicinal purposes but also for food purposes.
The tuberous roots of 2-year-old plants are harvested at the end of the growing season, washed thoroughly and then dried in the sun or in dryers after removing the two ends and the core.
The roots are harvested in the spring and dried for later use.