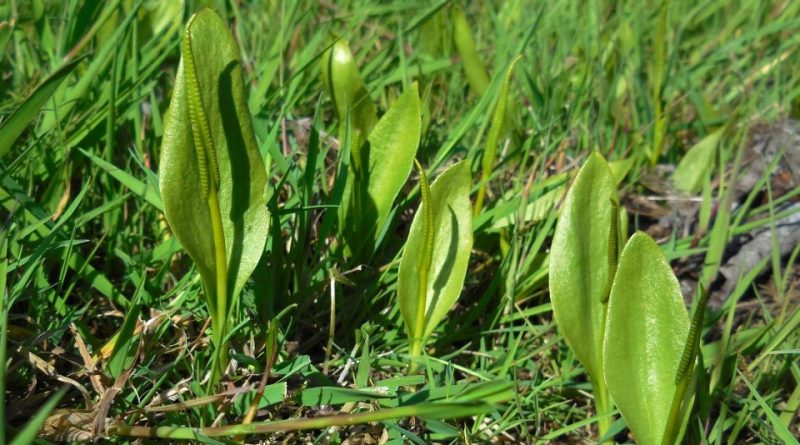 The Adder’s Tongue (Ophioglossum vulgatum L., 1753) is a fern belonging to the Ophioglossaceae family.

Etymology –
The term Ophioglossum comes from the Greek οφιϛ ophis serpent and from γλωσσα gloss lingua: snake tongue.
The specific epithet vulgatum comes from vúlgus vulgo: very common, ordinary due to its widespread use, banal.

Geographic Distribution and Habitat –
The Adder’s Tongue is a fern with a vast circumboreal distribution with presence in Europe, including Great Britain, from southern and eastern Iceland to northern Africa, to northern and western Asia.
In Italy it is present in all regions except in Valle d’Aosta, Puglia and perhaps Calabria.
Its habitat is that of humid meadows and shady woods, especially in the periodically flooded grasslands of Molinia coerulea, with optimum below the upper mountain belt, from 0 to 1700 m a.s.l. 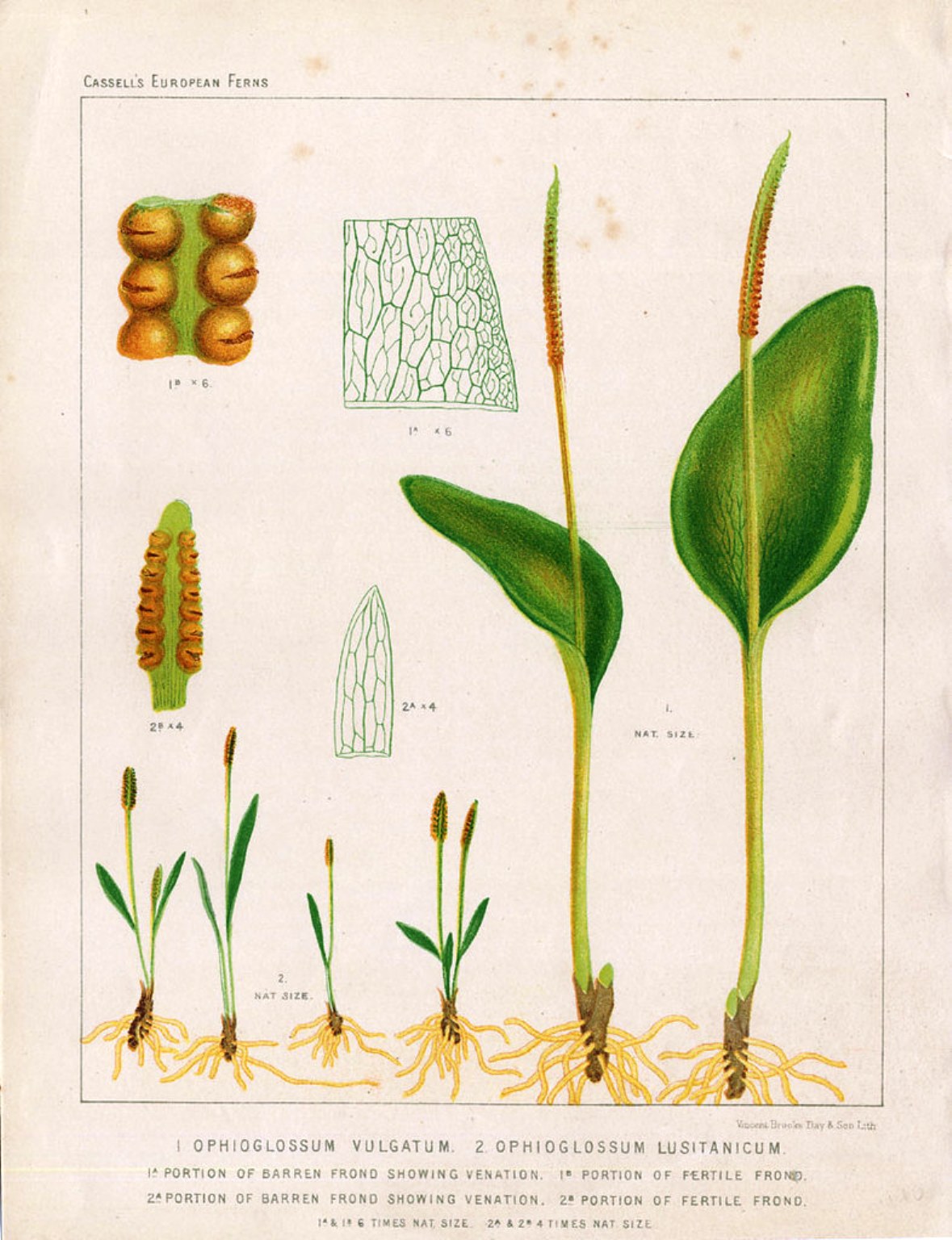 Description –
Ophioglossum vulgatum is a perennial pteridophytic species, 8-30 cm tall, with a short vertical rhizome with fasciculated roots.
It has a sterile lamina (nomophyll) generally solitary (exceptionally two), yellowish green and shiny, oval to oval-lanceolate in shape with entire margin and often mucronate at the apex, subsessile, with a rounded and concave base, wide up to 5 cm and up to 12 cm long, with reticulated rib and with secondary nerves not anastomosed; it develops above the ground level on an axis covered at the base by a brown sheath.
The fertile lamina (sporophyll) is transformed into a linear spike of 2-6 cm (3-4 mm Ø) with the sterile tip, inserted on a long peduncle at the base of the sterile lamina and eventually surpassing it.
The sporangia are globose, welded together, with thick walls and without annulus, dehiscent in 2 valves per transverse slit, inserted with 15-40 pairs on the sides of the ear.
It has trileti, reticulate-warty spores.
The plant quickly disappears after the release of the spores, with slagging that occurs in the period between April and July.

Cultivation –
The reproductive cycle of Ophioglossum is complex as the development of the prothalla (gametophyte) requires the presence of a symbiont fungus and takes several years before being able to generate a new sporophyte.
Unfortunately, ophioglossums appear to be in decline due to this presumable loss of competitiveness and the damage generically caused by man to the environment.
This fern is harvested in its natural state for local use as a food and medicinal use.
For growing, this fern prefers a moist and draining soil and is resistant to minimum temperatures down to about -15 ° C.
The protalli (small plant that forms when the spore germinates) of this species form a symbiotic relationship with a mycorrhizal fungus in much the same way as orchid seedlings.
Propagation occurs by spores which would go when they are just ripened on a humus-rich and sterilized substrate. It is advisable to keep the substrate moist, for example by using a plastic film. After which the small plants are potted as soon as they are big enough to handle them; these must be kept in humid conditions until they are well stabilized. It is recommended not to plant outdoors until the ferns are at least 2 years old.
Propagation can also be carried out by division of the underground rhizomes, treating them with care because the roots are quite fragile.

Customs and Traditions –
Ophioglossaceae are eusporangiate ferns (mature sporangia have a wall formed by multiple cell layers and development occurs starting from multiple cells).
As for the food and medicinal use of this plant, although no reports of toxicity have been found for this species, some ferns contain carcinogenic substances, so a certain caution is advisable.
Many ferns also contain thiaminase, an enzyme that deprives the body of its vitamin B complex. In small amounts this enzyme will not harm people on an adequate diet rich in vitamin B, conversely large amounts can cause serious health problems. The enzyme is destroyed by heat or complete drying, so cooking the plant removes the thiaminase.
This fern has been used for edible uses, as a vegetable, although there are not many details about it.
In the medicinal field, on the other hand, the root and the leaves are used which are antiseptic, detergent, emetic, hemostatic, hemostatic and vulnerary.

Preparation Method –
Both the leaves and the root are used from the Adder’s Tongue.
The plant, especially in the past, was eaten, after cooking, like a vegetable.
An ointment is obtained from the plant which is considered a good remedy for wounds and is also used in the treatment of skin ulcers.
The squeezed juice from the leaves is drunk as a treatment for internal bleeding and bruising.