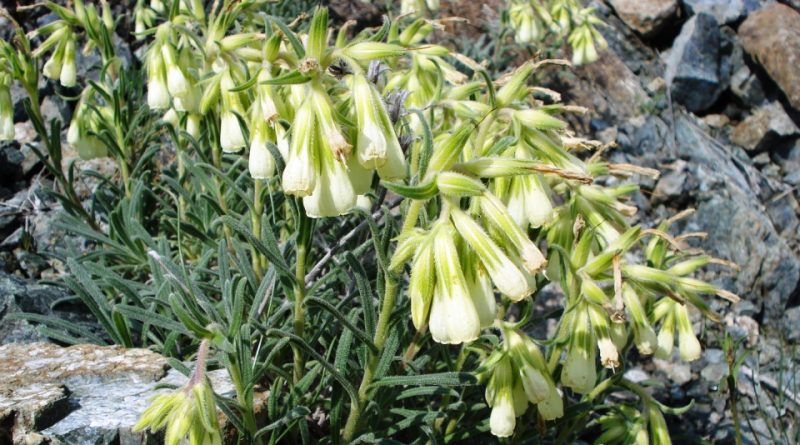 The Snake Onosma (Onosma echioides (L.) L.) is a suffruticosa species belonging to the Boraginaceae family.

Etymology –
The term Onosma comes from the term of the plant mentioned by Pliny as ononis, taking it from ὄνοσμα onosma / ὄνωνις ononis, Greek name of a boraginacea in Dioscorides and Theophrastus, probably an Anchusa; the name derives from ὄνος onos donkey and from ὀσμή osmé odore, that is, a plant that smells like a donkey or that the donkeys like; if it is true that donkeys eat these thorny plants, the second hypothesis could be the correct one.
The specific epithet echioides comes from Echium (from the Greek ἔχις ékhis vipera: viper plant) viper grass and from the Greek εἷδος eídos appearance: similar to viper grass.

Geographic Distribution and Habitat –
The Snake Onosma is a plant with an amphidia distribution and present, with 4 subspecies, in all peninsular regions, in Sicily and in Veneto; the Dalmatian subspecies is an entity with a prevalently Illyrian distribution, present in Venezia Giulia and in the Veneto region.
Its pot distribution range includes southern Europe up to northern Africa.
It is however an entity present above all in the Italian area, but with limited encroachments into neighboring territories.
Its habitat is that of arid meadows, from which it sometimes passes in ruderal vegetation on escarpments, oil pipelines, on the edges of gravel roads, on shallow limestone soils rich in skeleton, very arid in summer, below the mountain range, up to 1400 m above sea level. 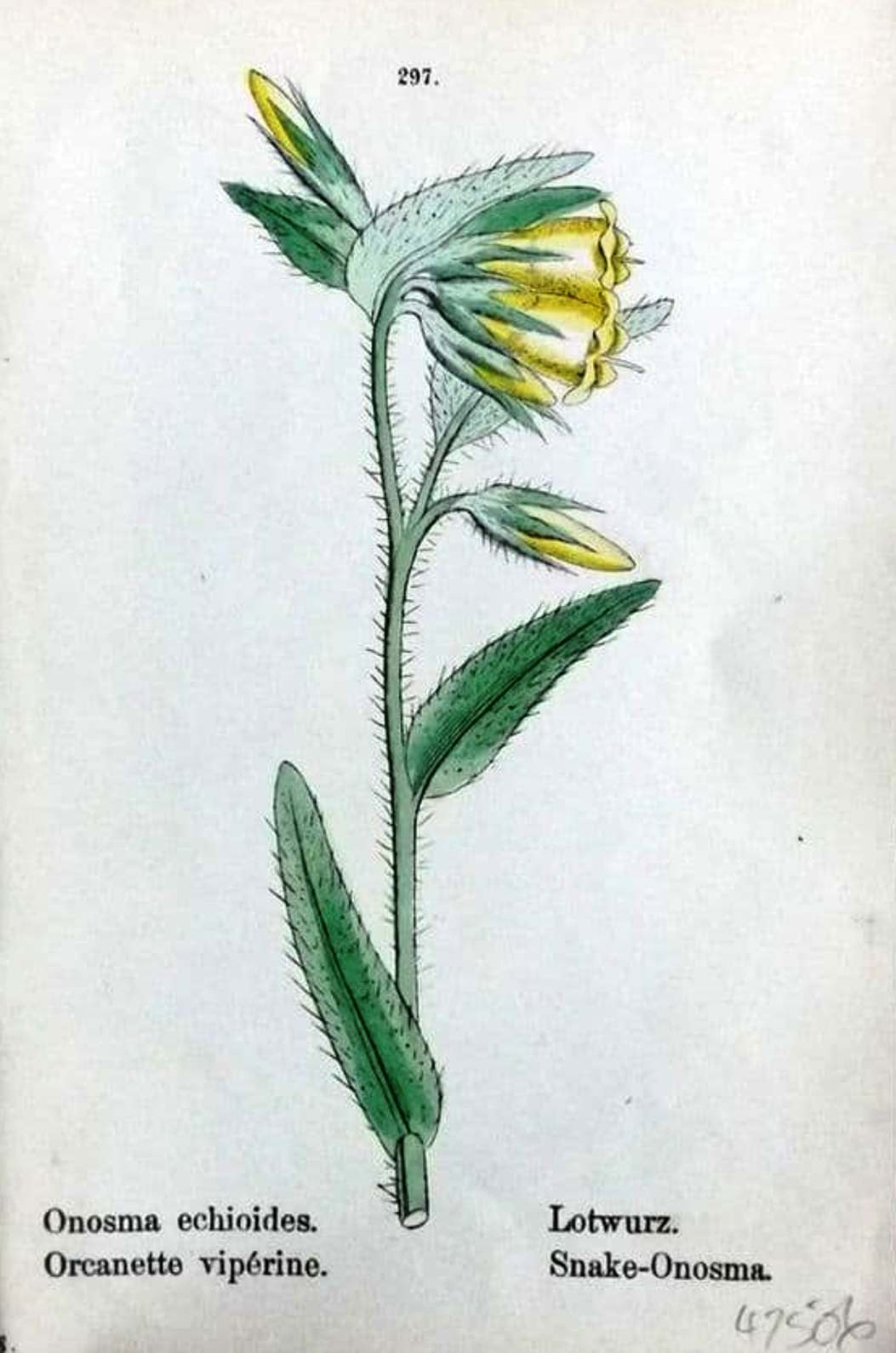 Description –
Onosma echioides is a perennial suffruticosa plant, up to 50 cm tall and covered with thin bristly hairs.
The stem is lignified, with several sterile branches and robust fronds and the roots are rigid and taproot.
The leaves are glaucous green in color, covered with whitish stellate bristles. Up to 3 cm long, they have a lanceolate linear shape (the upper ones are a little oval), with a slightly revolute edge.
The flowers, briefly pedunculated, are pendulous, collected in a unilateral cluster and have:
– a tubular corolla (about 2,5 cm long), pale yellow, ending with 5 small raised and fringed scales, open towards the outside;
– a large cup covering the corolla for two thirds, divided into 5 narrow and long teeth;
– a long style emerging from the corolla.
The plant blooms in the period of June-July.
The fruit is a microbasarium (tetranucula) with monosperm mericarps (nucule), apicolate ovoids, of 2-3.3 (3.8 mm, narrower at the base than in the median part, with ventral keel and base of insertion to the ± triangular receptacle and concave.

Cultivation –
Onosma echioides is a perennial plant that is harvested in its natural state for local use as a medicine and source of materials.
However, remember that bristly stems and leaves can cause significant skin irritation.
The plant is also suitable for cultivation but requires well-drained soil and full sun exposure.
It prefers a sandy, deep and rather rich substrate. It also lends itself to cultivation in rock gardens, as an ornamental plant.
Generally tolerates hot, dry conditions and even drought but does not like wet winter or summer.
The plant is resistant up to about -15 ° C.
Propagation occurs by seed in spring and, if sown in seedbeds, with transplantation in early summer.
Propagation can also be carried out through cuttings in the summer but with shading for the first 10 – 12 days.

Customs and Traditions –
Onosma echioides is a plant that, especially in the past, was used for medicinal purposes or for other uses.
The leaves are alterative and reduced to powder they were given to children as a purgative.
The flowers are used as a cordial and stimulant in the treatment of rheumatism and cardiac arrhythmias.
The shredded root is used as an external application for rashes.
Among other uses, it should be remembered that once a red coloring substance was extracted from its roots, for fabrics, food and cosmetics. It was used to replace the alkanna (Alkanna tinctoria L. Tausch).
Finally, it is emphasized that this plant is a good mellifera.

Preparation Method –
The use of Onosma echioides dates back to ancient times. Especially once the leaves were ground to dust and given to children as a purgative.
The flowers used are also used as a cordial and stimulant for rheumatism and cardiac arrhythmias.
The root is also used finely crushed or crushed in the external application of skin rashes.