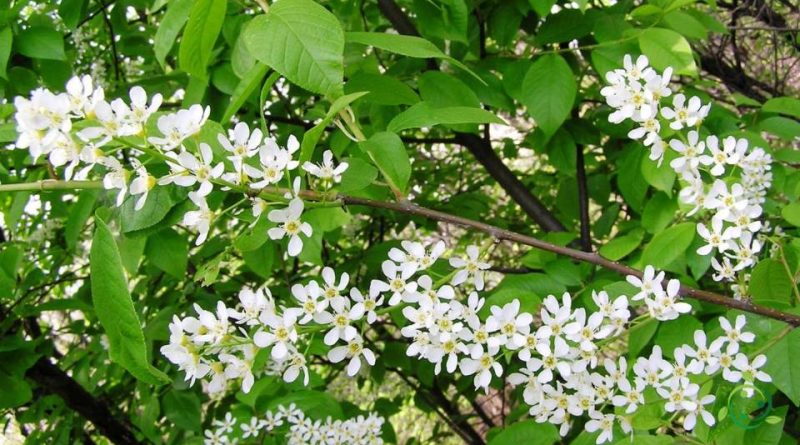 How Bird cherry is grown

The Bird cherry (Prunus padus L.) is a plant of the Rosaceae family, spread from Scandinavia and Spain to Western Siberia. In Italy it is mainly found in the North.
The reproductive structures are represented by flowers are hermaphroditic, whitish, perfumed, up to 1.5 cm wide and arranged in rich soft and pendulous cylindrical racemes, up to 16 cm long. The fruits are black and shiny drupes when ripe, gathered in clusters, with little mesocarp and endocarp similar to that of the cherry.

Cultivation –
The Bird cherry is a plant of easy cultivation, rustic, which can represent an interesting ornamental plant due to its remarkable and abundant blooms, which in autumn, when the livery takes on tones from yellow to orange and even amaranth.
The plant mainly requires sub acid soils but also adapts well to calcareous ones
It resists drought and humidity well. In parks and gardens it can be easily cultivated, for the construction of hedges or single specimens.
To favor a better tillering of the bushes, topping can be done during the resting or even vegetative phase, thus favoring the emission of lateral adventitious jets.

Although it is a rustic plant it benefits from irrigation and fertilization, which facilitate faster growth.
If watered and fertilized it grows very quickly.
Prunus padus is a more resistant plant than sweet cherry, it does not normally have specific parasites, it tolerates all the most common fungal diseases well and consequently does not require fungal treatments.
The plant can be reproduced both by seed and by cutting.

Uses –
Prunus padus is a tree widely used for ornamental reasons also in urban furniture due to its showy flowering.
It is also an essence of a certain forestry interest. In central Europe it is widely used for ornamental purposes in parks, gardens and road trees.
In the Middle Ages the infusion with its bark was used as a sedative tonic for stomach pain and considered useful for preventing the plague.