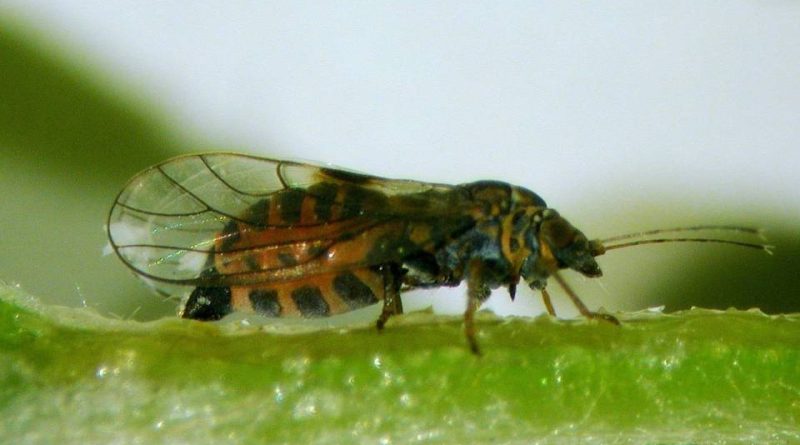 The pear psylla or pear psyllid (Cacopsylla pyri, Linnaeus) is an insect belonging to the Psyllidae family.

Geographic Distribution and Habitat –
The pear psylla is an insect found throughout Europe in Scandinavia and Asia. Once rare in Britain but now much more common, especially in the south-east of the country.
This insect was also accidentally introduced to North America, observed in Connecticut in 1832 and arrived in Washington State in 1939, soon becoming a serious pest of pears in the Pacific Northwest.
Cacopsylla pyri is one of the most important phytophages of the pear tree; among other things, due to the numerous chemical interventions, its danger has increased, reducing the effectiveness of the natural antagonists of this insect. However, it is not considered a harmful insect in agrosystems conducted with integrated defense, which has favored a recovery of the Psylla’s natural enemies.
This insect colonizes the shoots, young leaves, young branches and, sometimes, even the fruits of the pear tree.

Morphology –
The pear psylla, at the adult stage, is a small insect about 2,5-3 mm long; it has an ocher, hazelnut or brownish color, depending on the stage of the considered form (wintering people are darker); the wings are transparent and are positioned with a sloping roof on the body.
The nymphs, not very mobile, have a completely different appearance from the adults. These have a flattened shape, of yellowish-orange color, in the first age, to become more and more dark with the growth up to become brown-blackish (nymphs); the nymphs have two typical lateral expansions.
The juvenile stages of Cacopsylla pyri are covered with abundant honeydew which assumes the function of protection.
The eggs are yellow-orange, elongated and with a pointed formation, which serves to attach the egg to the tissues, at one end, while on the other side there is a tail.

Attitude and Life Cycle –
Cacopsylla pyri, especially in the juvenile forms, colonizes the buds, the young leaves, the young branches and, more rarely, the young fruits; on all the organs you can see the various juvenile stages covered with honeydew which abundantly smears the organs themselves.
There are thus direct and indirect damages:
– the direct damages are consequent to the feeding bites that cause deformations and vegetative stops, with small localized necrosis on the shoots and on the young leaves;
– the indirect ones are caused by the presence of abundant honeydew that covers the juvenile forms; this, as already said on other occasions, causes damage directly, because it determines asphyxiation of the green organs, and indirectly, due to the lens effect on plant tissues as it concentrates the sun’s rays and causes burns. Furthermore, the presence of honeydew depreciates the fruits and makes the treatments less effective, especially against very protected juvenile forms; finally, saprophytic fungi settle on the honeydew, such as fumaggini, which decrease the photosynthetic yield, further altering the plant’s metabolisms.
It should also be remembered that Cacopsylla pyri is the vector of a serious disease, the Moria del Pero, sustained by a Phytoplasma transmitted by the trophic stings of the Psylla itself.
From the point of view of the biological cycle, this insect overwinters at the adult stage in various shelters in the orchard.
At the end of winter the activity resumes, starting to prick the still closed buds, in this phase it does not cause damage.
With increasing temperatures, oviposition begins; the period corresponds when the temperatures begin to stabilize on values ​​of about 10 ° C in the period of March-April.
The eggs are laid in the crevices of the rind, on the twigs or under the buds.
From these eggs the 1st generation is born, which lasts from April to May.
Following you can have up to 5 generations according to the following scheme:
– 2nd generation, between May and June;
– 3rd generation, between the end of June and July;
– 4th generation, in the height of summer (August);
– in some favorable climatic and environmental conditions there can be a 5th generation between late summer and early autumn (September).
In the summer period there is also an overlapping of generations and under certain conditions there can be up to 6-7 generations per year.

Ecological Role –
As mentioned, Cacopsylla pyri is one of the most important phytophages of the pear tree. Furthermore, in recent times, with the increase in the frequency of chemical interventions, its danger has been increasing, especially with the use of active ingredients with a broad spectrum of action, which have gradually reduced the populations of natural enemies of this insect.
This situation had become quite serious in the 70s-80s, a period in which, due to the massive and indiscriminate interventions of those years, a situation of extreme danger was created also in consideration of the emergence of populations of Cacopsylla pyri resistant to certain chemicals.
In recent times, with the in-depth study of parasitic biocoenoses, with new knowledge related to agroecology and new integrated pest management techniques, Cacopsylla pyri is gradually returning to less invasive population dynamics.
In fact, the reduction in the number of interventions and the use of targeted products, and no longer with a broad spectrum of action, has favored the restoration and maintenance of populations of natural enemies (protective method) which assist in the control of Cacopsylla pyri populations.
If we add to this the latest agroecological techniques, the increasing use of associations, including trees, and the decrease in crop specializations, we understand how within a few years the problem of this insect could return to normality.
Currently, interventions are still carried out according to the method of guided and integrated struggle with treatments carried out only when the threshold is exceeded and by monitoring the presence of the natural enemies of C. pyri.
As a guideline, the intervention thresholds are:
– treatments, in the presence of honeydew or damage, on the fruits until mid-June;
– treat, always in the presence of honeydew or damage, in relation between the number of infesting jets from Psylla and Antocoridae, which must be equal to 5: 1; if higher, action is taken (from mid-June onwards).
In addition, the fighting techniques include:
– in the presence of eggs, with ovicides (Diflubenzuron, Teflubenzuron) or white oils, in spring-summer;
– in the presence of nymphs, with Abamectin, preceded by washing treatments with detergents and water, by the end of May.
We remind you that these interventions are performed with the use of products with a narrow spectrum of action also for other pests of the pear tree, to avoid damage to the natural enemies of C. pyri; for example, biological products such as Bacillus thuringiensis are used instead of chemicals.
We remind you that the best future way will be that of the perfect rebalancing of the populations of this insect both in relation to predators and to the degree of infestation of pear trees.
To do this you need to know its natural enemies which are:
– Rincoti Antocoridi, genus Anthocoris (nemoralis and nemorum), predators of all stages of Psilla; genus Orius, predators of nymphs and adults of Psylla; the Anthocorids make 2-3 generations a year and overwinter as adults;
– Diptera Sirfidae and Cecidomidae;
– Chrysopid neuroptera, Rincoti Miridae and Nabidae;
– Prionomitus mitratus, Parasitoid Hymenoptera of the preimaginal stages of the Psylla.
However, the rebalancing of the population dynamics of Cacopsylla pyri can only be achieved by changing the setting of the production systems, leaving the criterion of specializations and implementing consociative models in which several plants contribute both to ecological balance but also to corporate profitability.