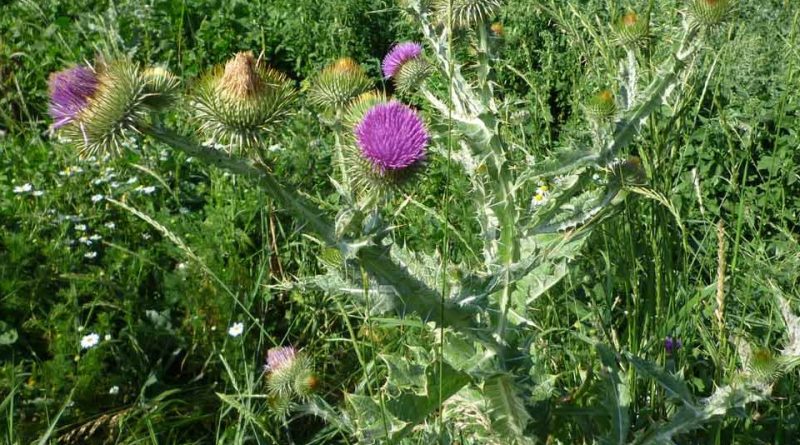 The Cotton thistle or Scottish thistle (Onopordum acanthium L., 1753) is a herbaceous species belonging to the Asteraceae family.

Etymology –
The term Onopordum comes from the Greek ονος onos donkey and from πορδη pordè peto, due to the presumed effects of intestinal turbulence that the plant gives to the donkeys who are greedy for it.
The specific epithet acanthium comes from the Greek ἀκάνϑιον acánthion, the name of a small thistle mentioned by Dioscorides.

Geographic Distribution and Habitat –
The Cotton thistle is a plant native to Europe and Asia. The plant was also widely introduced in mid-latitudes throughout much of North America.
We find it in the Alps with a discontinuous distribution both on the Italian territory and beyond the border which can be found in France (it is present in all the Alpine departments), Switzerland (it is present in the cantons of Bern, Valais and Grisons), Austria (it is present in the Länder of the North Tyrol, East Tyrol, Carinthia, Styria and Lower Austria) and Slovenia. It is also present on the other European reliefs and we find it in the Jura Massif, the Central Massif, the Pyrenees, the Balkan Mountains and the Carpathians.
Outside of Europe it is found in Siberia, Mediterranean and Middle Asia and Algeria.
In Italy this species is found mainly in the north and center, but is considered rare.
Its habitat is that of places with dry summers, such as the Mediterranean region, growing best in sandy clayey and limestone soils rich in ammonium salts. It grows in ruderal places, as well as in arid pastures and disturbed fields. Its preferred habitats are natural areas, disturbed sites, roadsides, fields and especially sites with fertile soils, agricultural areas, meadows and pastures, riparian areas, scrub valleys and plains, shrubs and streams. .
It is above all temperature and humidity, rather than nutrient concentrations in the soil, that determine the ecological performance of Onopordum species.
The altitudinal distribution is up to 1,500 m above sea level. 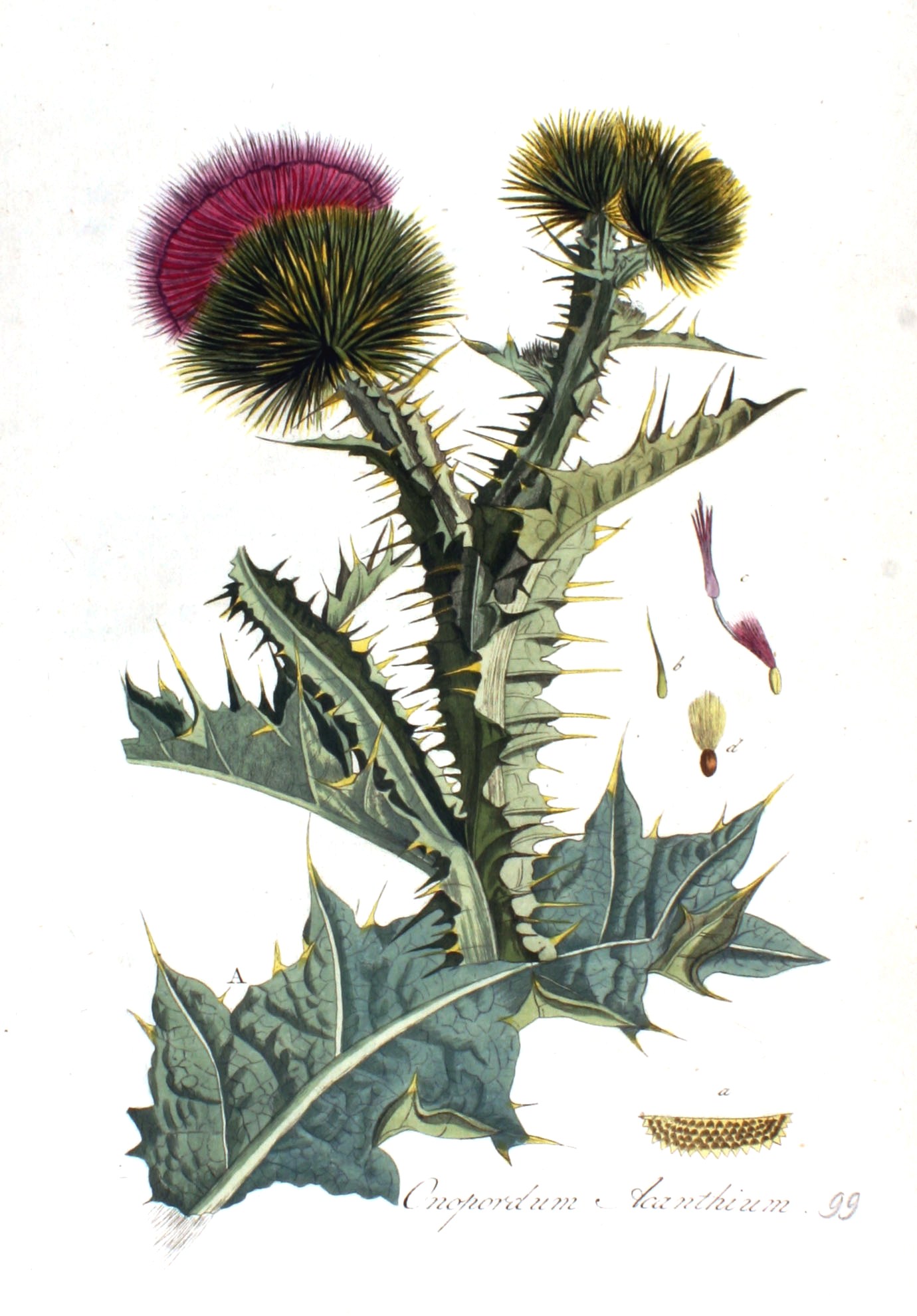 Description –
The Cotton thistle is a biennial plant with gray white color, tomentose and with a thick and very developed root.
The stem is broadly winged-thorny 150-180 cm in height, which is crossed for its entire length by several irregular toothed-spiny wing expansions; with spines bristling almost 1 cm.
The basal leaves are sessile pinnatopartite with broadly triangular division, oblong, toothed-thorny, gray-blue, pubescent cobweb, white-tomentose below, with a strongly thorny margin; the cauline with a long foliate effect.
The inflorescences have large, solitary or agglomerated flower heads of 3-5 cm in diameter, at the apex of the stem, surrounded by a globular-spider web, covered by bracts with large spines 2-3 mm wide at the base, long attenuated. subulates at the apex (awl-shaped). The corolla is purplish-purplish in color, with hermaphroditic tubular flowers.
Flowering occurs from July to August (September).
Pollination occurs by bees.
The fruits are achenes (cypseles) of 5-7 mm, obovoid to ellipsoid shape compressed, with 4 ribs, transversely wrinkled, brown in color with blackish spots, surmounted by a pappus of bristles, pink or whitish, rough toothed of 7 -11 mm, connected to the base.

Cultivation –
Onopordum acanthium is a biennial plant that in various parts is harvested in its natural state for local use as food, medicine and source of materials.
This plant is easy to grow, as it grows in many types of soil.
However it is best that the soil is well drained, preferably in full sun although it tolerates light shade. It prefers a soil with a slightly alkaline pH. The plant grows very well in poor soils, in dry heat conditions and tolerates drought when it is established.
It is a slow growing plant that is resistant to temperatures as low as around -15 ° C and that flowers the second year.
It is a plant that propagates by self-sowing and can also become intrusive.
Among other things, the young seedlings can be easily uprooted and transplanted if they are taken when they are still small.
The propagation must be done by sowing directly in the open field in the spring period. However, the seed can also be sown in autumn.

Customs and Traditions –
Onopordum acanthium can be confused with Onopordum illyricum (L.) – Onopordum major, which grows in the Mediterranean area with a dry climate. It differs from Onopordum acanthium L. for the bracts of the flower head (3-6 cm in diameter) green and reddish at the top, with a short reflected spine and with white-tomentose leaves below and above, with incisal-thorny divisions and thick stem with wings thorny.
Onopordum acanthium is, however, a little known plant, rarely included among medicinal plants for domestic use and little used in the kitchen.
Onopordum acanthium is also called Scottish thistle, as it is the heraldic symbol of this region.
The first kings of Scotland introduced this plant as a heraldic emblem, but only in 1503 was it recognized when William Dunbar wrote a poem “The Thistle and the Rose” to celebrate the marriage of King James III of Scotland to Princess Margaret of England.
In 1687 James II instituted the order of the Cardo as a special Scottish order of chivalry. This order is the oldest of all those present in Great Britain, except that of the Order of the Garter.
At one time it was popular belief that the unmarried girls of the locality of Milo, in the Etna area, wishing to take a husband, used the inflorescences of the Onopordo, to predict a possible imminent marriage; the young, on the eve of San Giovanni, June 24, collected the premature inflorescences of this plant and placed them underground in a secret place.
The next day, at dawn, they unearthed them to examine their color: if it was white it meant that the wedding was far away, if it was colored the wedding had to take place shortly or within the year.
The marriage test depended more or less on the color hue of the inflorescence.
As for medicinal uses, this plant is used in homeopathy where it is appreciated for cardiovascular disorders, while in herbal medicine it is recognized for its aperitif, anti-inflammatory and diuretic properties.
It can be used in inflammatory diseases of the stomach, intestines, such as gastritis, colitis and can bring relief to some disorders of the urinary tract organs.
Onopordum acanthium is used in some heart medicines.
The juice of the plant has been used with good results in the treatment of tumors and ulcers.
A decoction of the root is astringent.
In the kitchen you can use the fleshy receptacles of the flower heads, as well as the thick ribs of the leaves, cooked, boiled or stewed, they are edible like artichokes (Cynara cardunculus L.) You must be careful to cut the edible parts, using suitable gloves and it is advisable to let the leaves wither in order to completely free the fleshy median ribs from the thorns and the leafy part.
Natural seeds are toxic.
It is an excellent honey plant that attracts bees for its abundant nectar.
In England, the fibers of the dried plant were used to stuff pillows and mattresses.
Due to the very decorative characteristics of both the leaves and the inflorescences, some varieties are grown as ornamental plants in gardens and parks.
Among other uses, it should be noted that an extract of flowers, leaves and stems is used in commercial cosmetic products as a skin conditioner.
Stem hair is sometimes collected and used to stuff pillows.
A further practical use was once offered to us by its seeds which, after pressing, provided oil for food use and as fuel for lamps.
Furthermore, this plant, as mentioned, is used in gardening. This species was introduced in European gardens around 1640.
In some areas (such as the United States) this plant is considered a pest as it ruins the cultivated fields but above all the pastures.

Preparation Method –
The Cotton thistle, as seen, has numerous uses both of a medicinal and food nature or for other uses.
In the kitchen, the fleshy receptacle of the flower head is edible (it has a sweet and pleasant taste similar to artichoke); while its seeds are oily. The flowers (petals) are used to adulterate saffron. The stems, collected before flowering, removed the thorns and the leathery outer part, can be eaten like asparagus.
The leaves and young plants can therefore be eaten cooked.
They are harvested before the flowers develop and the thorns must be removed before cooking.
The petals, in some areas, are used as an adulterant of saffron.
A good quality edible oil is obtained from the seed.