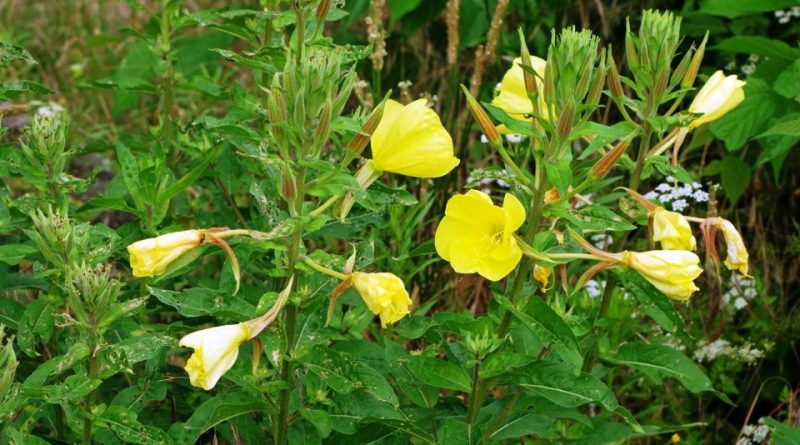 The common evening-primrose (Oenothera biennis L., 1753) is a herbaceous species belonging to the Onagraceae family.

Etymology –
The term Oenothera comes from the Greek οἶνος óinos vino and from wild θήρ thér: because the root was sought to flavor the wine.
The specific epithet biennis comes from biennial, from the prefix bis- twice and from annuus, annual: as a species that have a life cycle of two years.

Geographic Distribution and Habitat –
Oenothera biennis is a Subcosmopolitan plant or according to other authors native to eastern and central North America, from Newfoundland to the west to Alberta, to the south-east of Florida and from the south-west to Texas, and widely naturalized elsewhere in the temperate and subtropical regions .
The plant is also present in Europe and outside the old continent it is found in almost all areas of the northern hemisphere (Asia and America), but also in South America, the Pacific islands, New Zealand and Australia.
In Italy it is present in the north, in the Po Valley but also in the center and in the Apennines.
In the Alps it is found everywhere except the province of Cuneo. On the mountain ranges, outside Italy it is located in the Pyrenees, Massif Central, Massif of Jura, Vosges, Black Forest, Carpathians and Balkan Mountains.
Its habitat is obviously very varied but in general it tends to be present in incoherent soils such as escarpments or edges of roads and railway embankments; it is considered a colonizing plant, which is often found in poor and gravelly soils of water courses, sandy (alluvial type) and generally exposed. The preferred substrate is both calcareous and siliceous, with soil having a neutral pH, medium nutritional values ​​and rather dry.
Its altitudinal diffusion can reach up to 1200 m s.l.m., thus frequenting the hilly and partly mountainous vegetation plans. 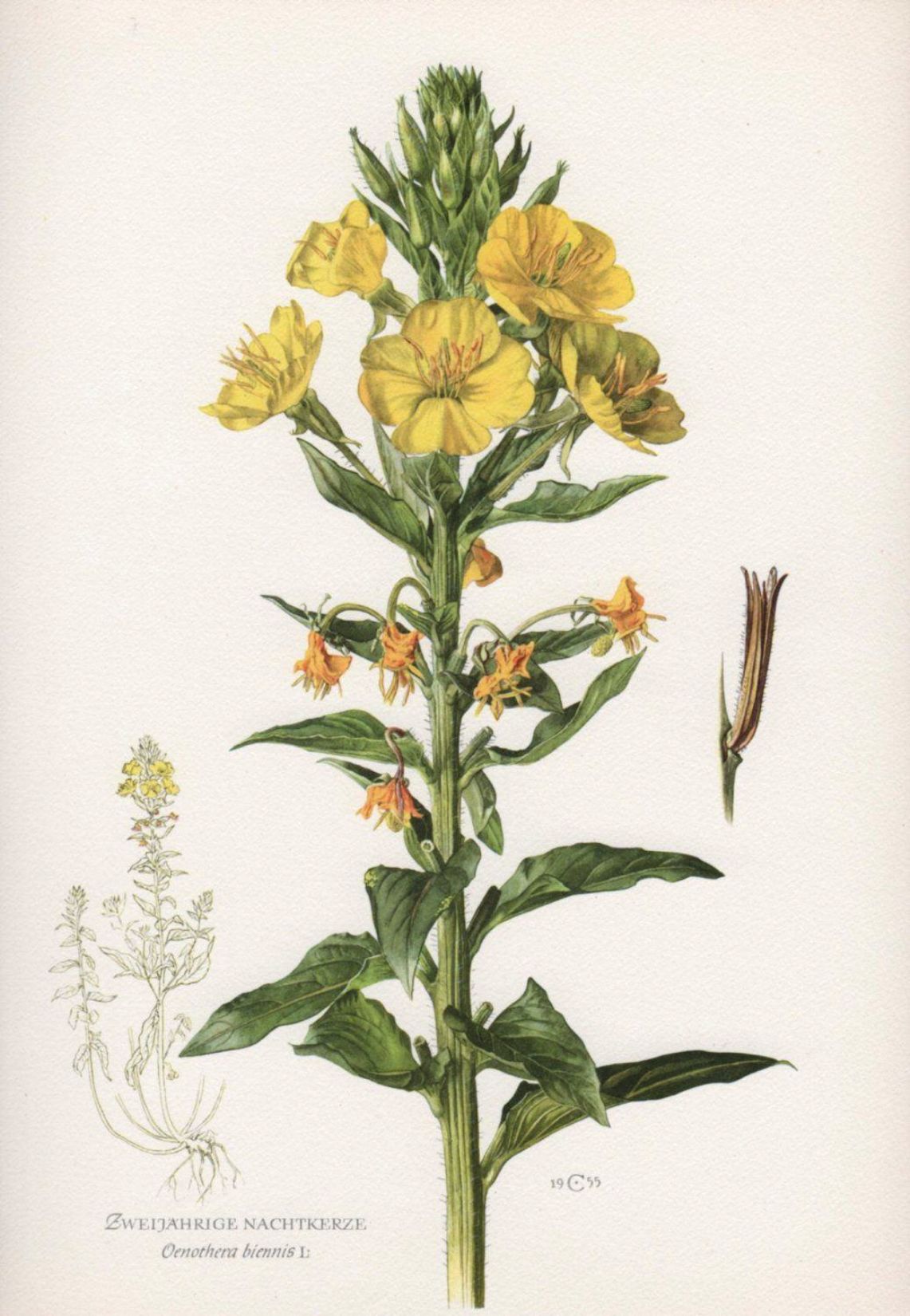 Description –
The common evening-primrose is a biennial herbaceous plant that reaches a height of 1.6 m.
The leaves are lanceolate, 8–18 cm long and 2–6 cm broad; they are produced in a narrow rosette the first year and spirally on a stem the second year.
The flowers are yellow, 2.5-5 cm in diameter, with four bilobed petals. The flower structure has fluorescences that are invisible to the naked eye but evident under ultraviolet light and visible to its pollinators, such as moths, butterflies and bees.
The flowers are hermaphroditic, produced on a high spike and last only until the next noon. They visibly open quickly every night producing a unique show.
Flowering lasts from late spring to late summer.
The fruit is a capsule 2-4 cm long and 4-6 mm wide, containing numerous 1-2 mm long seeds, released when the capsule divides into four sections when ripe.
Seeds are an important food for birds and some insects.

Cultivation –
Oenothera biennis is a biennial plant that is also harvested in its natural state for local use as a food, medicine and source of materials.
The plant can be grown on sandy, well-drained and dry soils with a sunny exposure and a warm climate; however, it tolerates many types of soil as long as they are not heavy and asphyxiated.
The plants that have now taken root are resistant to drought.
The plant was cultivated, especially in the past, for its edible roots, while now it is cultivated for the oil contained in its seed which contains some essential fatty acids and is a very precious complement to the diet.
The seed, however, is very small and difficult to collect and must be done by hand. Overall yields are low, making the oil very expensive to produce. Theoretical yields of 2.5 tons per hectare have been suggested, but actual yields are between 0.49 and 1.2 tons per hectare.
The flowers open in the evening and are heavily scented with a lovely sweet scent that attracts pollinating moths.
As far as propagation is concerned, plants usually self-sow freely if they grow in a suitable position and can spread and naturalize in the surrounding land.
Sowing must be done in situ in the period from late spring to early summer.

Customs and Traditions –
The cultivation of this plant can be traced back to the mid-1600s when it began to be cultivated as an edible plant, both in the underground parts, as a salad, and the young roots that can also be eaten as a salad. The large root, on the other hand, at the end of flowering, can be boiled, like a carrot or beet, and eaten as a side dish.
As mentioned, the root of this plant is eaten cooked and eaten like salsify. It is meaty, sweet and succulent in texture and is healthy and nutritious, with a peppery taste that is somewhat reminiscent of salsify or parsnips.
Young shoots, raw or cooked, can also be eaten. They are a little mucilaginous, with a peppery taste and should be used sparingly: according to other sources it is said that the sprouts should not be eaten.
The flowers are also sweet and are used in salads or as a garnish.
Young pods are steamed and eaten.
The seed, which contains 28% of a drying oil, is edible and is an excellent source of gamma-linolenic acid, an essential fatty acid that is not found in many plant sources and performs many vital functions in the body. The seed contains more than 70% linoleic acid and about 10% gamma linolenic acid.
Oenothera biennis is also used in the medicinal field.
The bark and leaves are astringent and sedative.
They have proved useful in the treatment of gastrointestinal disorders of functional origin, pertussis and asthma.
A flower-based syrup is also an effective treatment for whooping cough.
The bark is deprived of the flowering stem and dried for later use, the leaves are also collected and dried.
The oil from this plant has become a well-known dietary supplement since the 1980s. Research suggests that the oil is potentially very valuable in treating multiple sclerosis, premenstrual tension, hyperactivity, etc.
It is also taken internally to treat eczema, acne, brittle nails, rheumatoid arthritis, and alcohol-related liver damage.
Regular consumption of the oil helps reduce blood cholesterol levels and lower blood pressure.
The seed is a good source of gamma-linolenic acid, an unsaturated fatty acid that aids in the production of hormone-like substances.
This process is commonly blocked in the body, causing disorders that affect the uterine muscles, nervous system, and metabolism.
In detail, from a biochemical point of view, the seeds contain from 7% to 10% of γ-linolenic acid, belonging to the family of omega-6 fatty acids; the extracted oil is being studied to investigate its benefits. Other compounds are mucilage, phytosterol, ceryl alcohol, flavonoids and tannin.
The smeared root is applied to hemorrhoids and bruises.
From the roots a tea is obtained which is used in the treatment of obesity and intestinal pains.
Among other uses, it should be remembered that the seed oil is added to skin preparations and cosmetics. It is often combined with vitamin E to prevent oxidation.
From the flowers a yellow dye is obtained.
A finely ground powder obtained from flowering stems that is used cosmetically in face masks to counteract reddened skin.
This plant is also used in gardening as a decorative and easy to plant species. There is a variety (or cultivar) with large flowers.
Finally, in industry, a good yellow dye can be obtained from the petals; and from other parts of the plant are also obtained products for cosmetics (in fact, among other properties, the “Evening Primrose Oil” is indicated to maintain the elasticity of the skin and prevent the onset of wrinkles).

Preparation Method –
The common evening-primrose is a plant that is used both for food, medicinal and cosmetic, industrial uses and as an ornamental plant.
The parts of the plants used are almost all, but above all the roots; the recommended harvesting period is autumn.
For food use, the root is eaten which is cooked and has a peppery taste that is somewhat reminiscent of salsify or parsnips.
Young shoots are also consumed, raw or cooked.
The flowers are also sweet and are used in salads or as a garnish.
Young pods are steamed and eaten.
The oil, on the other hand, is used not only in the food sector, but also in the medicinal and cosmetic fields.
From the roots a tea is obtained which is used in the treatment of obesity and intestinal pain and other preparations as specified above.