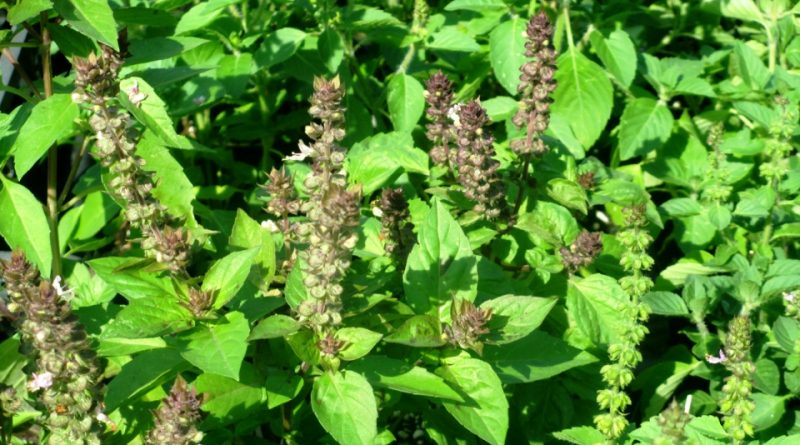 The holy basil (Ocimum tenuiflorum L. 1753) is a herbaceous and aromatic annual species belonging to the Lamiaceae family.

Etymology –
The term Ocimum comes from the Greek ὤκῐμον ócimon basilico; this gives ὄζω ózo odorare, emanate odor: due to the characteristic scent of the plant.
The specific epithet tenuiflorum comes from slender, thin, delicate tenuis and from flos floris fiore: with slender, delicate flowers.

Geographic Distribution and Habitat –
The holy basil is a plant native to south-tropical Africa, it is widespread in China, Southeast Asia and India naturalized in southern Europe, Australia and South America. It is present in particular in China, the Indian subcontinent, Myanmar, Thailand, Cambodia, Laos, Vietnam, Malaysia, Indonesia, Philippines, New Guinea and northern Australia.
In a large-scale phylogeographic study of this species, conducted using sequences from the chloroplast genome, a group of researchers from the Central University of Punjab, Bathinda, found that this plant is native to north-central India.
This basil has now escaped cultivation and has naturalized in a cosmopolitan distribution and its current natural habitat is that of desolate places or in inhabited areas and scrublands of the tropics and humid plains where it is found at altitudes up to 1,000 meters. 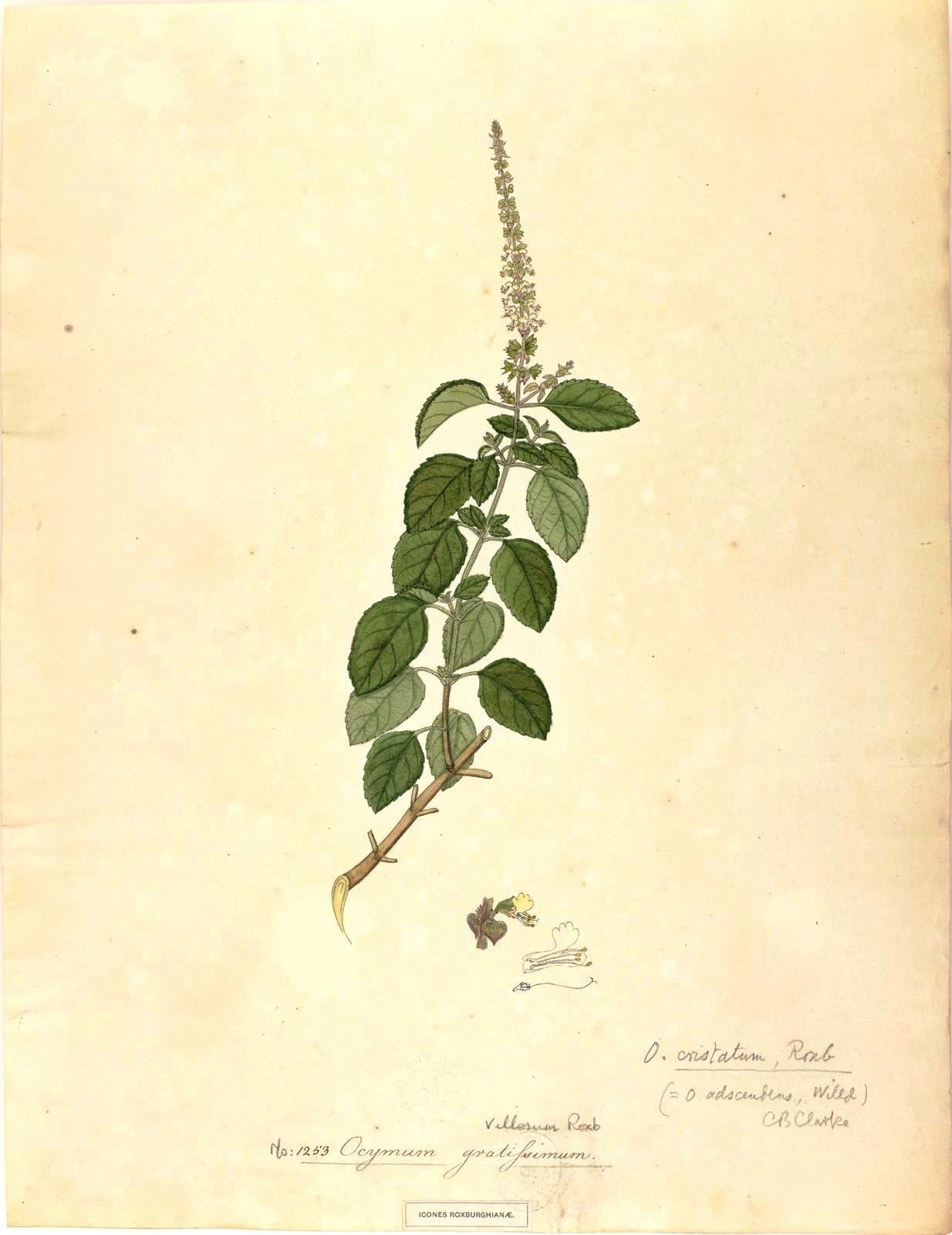 Description –
Ocimum tenuiflorum is a perennial and aromatic herbaceous plant, erect, very branched that grows from 30 to 100 cm in height.
The stem has a quadrangular base, with a color ranging from green to pubescent purple.
The leaves are simple, decussate and petiolate. The petiole can reach up to 2.5 cm in length. The lamina with toothed margin, lanceolate 2.5 – 5 cm long and 1.5 – 2.5 cm wide, wedge-shaped at the base and acute at the apex, green to purple, pubescent, and with glands on both surfaces. The leaves have a sweet and pungent flavor.
The flowers are petiolate, with a petiole as long as the calyx, arranged in whorls on an inflorescence. The corolla is small and white to purple-pink in color, formed by two lips. The lower lip of the chalice points downwards. The posterior stamens are basically pubescent. The anthers have equal cases.
The fruit is divided into 4 distinct lodges, enclosed in a tube by a persistent sepal. The loggias are black, ovoid, 1 mm wide and 1.5 long. In contact with water, the seed does not become sticky. Inside the lodge the seed is free.

Cultivation –
Ocimum tenuiflorum is a plant that is normally cultivated as a sacred plant in India but, due to its characteristic and marked scent, it is cultivated because it is widely used in Mediterranean and Southeast Asian cuisine.
This plant has been cultivated for over three thousand years and is still widely grown around homes and temples for its protective influence.
It is also commonly grown in other tropical areas for its leaves and medicinal uses.
Ocimum tenuiflorum is a tropical plant that grows best in areas where annual daytime temperatures are between 20 and 28 ° C, but can tolerate 15 – 35 ° C.
When dormant, the plant can survive temperatures as low as around -1 ° C.
It prefers an average annual rainfall in the range of 1,000 – 3,000 mm, but tolerates 700 – 7,600 mm.
From the pedological point of view, it prefers a moist but well-drained soil in a sunny, rich, light position, with a pH in the range of 6 – 7.5, tolerating 5 – 9.
On the other hand, the cool, humid and cloudy climate causes the plants to succumb to gray mold.
All parts of the plant are sweetly scented and the twigs can be harvested only one month after the young plants have been planted, and subsequently every two weeks during the growing season.
The plant reaches the full flowering stage (maturity) 65 – 70 days after transplanting.
Propagation is by seed.
There are several cultivated varieties.

Customs and Traditions –
Ocimum tenuiflorum, also called Tulasi in Sanskrit and Tulsi in Hindi, is an important symbol in the traditions of the Hindu religion, it is considered a sacred plant that identifies Lakshmi, the bride of Vishnu, a symbol of harmony, beauty and goddess of fertility . Since according to tradition the Tulsi opens the doors of heaven, a leaf is placed on the chest of dying people and after death they wash their heads with a solution composed of linseed and holy basil. For this reason it is also grown in gardens and in pots at home.
Tulsi Vivah is a ceremonial festival performed between Prabodhini Ekadashi (11th or 12th lunar day of the bright fortnight of the Hindu month of Kartik) and Kartik Poornima (the full moon of the month).
It has long been used in Ayurvedic and Siddha practices for its supposed treatment of diseases.
Also, for centuries, dried leaves have been mixed with stored grains to repel insects.
The leaves of this plant, with a strong and characteristic aroma, have been used for centuries in Ayurvedic medicine which assigns it numerous properties, including adaptogenic, anti-stress, anti-inflammatory, cardiotonic, antioxidant, expectorant, digestive, antibacterial and those supporting the immune system. The plant has been used in the treatment of bronchial asthma, viral encephalitis, hypertension resulting from stress, mood and immune system disorders, gastric ulcer, arthritis and chronic fatigue syndrome.
Ocimum tenuiflorum is also used against some skin diseases including acne and insect bites and also helps reduce the amount of sugar and cholesterol in the blood. The seeds are recommended for premature ejaculation and for the increase of spermatogenesis.
Research has shown that it has the ability to lower blood sugar levels.
In India it has been part of traditional medicine for centuries; among the first Western countries where it was officially accepted by the authorities and offered for sale are the United States, the United Kingdom, Canada and France.
As for the edible uses, the leaves are eaten, raw or cooked. They have a sweetly spicy flavor, with a strong and pronounced clove scent, spicy. These are used in salads; they can also be cooked as herbs or used as a condiment in a variety of dishes.
From the leaves you can make a refreshing tea.
Fresh flowers are also used and the mucilaginous seeds are transformed into a sweet and refreshing drink.
As for the essential oil extracted from the leaves, this has a very variable composition, depending on the season, the place of cultivation and the development and harvest of the plant. Its main components are eugenol, ursolic acid and rosmarinic acid; to a lesser extent it contains Β-caryophyllene and oleanolic acid. The seeds contain linoleic acid and linolenic acid. From a nutritional point of view it provides vitamins A and C; calcium, iron, zinc and chlorophyll. It does not contain caffeine or other stimulants.
In summary, the essential oil consists mainly of eugenol (~ 70%) β-elemene (~ 11.0%), β-caryophyllene (~ 8%) and germacrene (~ 2%), with the remainder composed of various compounds in trace amounts and mainly terpenes.
Among other uses, the essential oil of the plant is also used as an insect repellent.
As for contraindications, please note that Ocimum tenuiflorum is not recommended during pregnancy and breastfeeding. It should not be given for therapeutic purposes to infants and children in the very first years of infancy. Following studies carried out in the seventies on animals, possible negative effects of basil on fertility were found. It could cause blood sugar to drop, so it shouldn’t be taken by people with low blood sugar. It should be taken in moderation by people with diabetes and should not be used at the same time as insulin or other antidiabetic drugs.
A particular use of this plant is also to use the stems cut into beads for rosaries.

Preparation Method –
Holy basil is used in cooking as a spice in some Asian countries; in Thai cuisine it is called kaphrao (in Thai กะเพรา), not to be confused with Thai basil, called horapha (โหระพา), which is the thyrsiflora variety of Ocimum basilicum also known by the English name of Thai basil. Among the most popular dishes in Thailand is phad kaphrao, fried chicken or pork with the addition of sacred basil. To preserve the flavor and properties of sacred basil, it is recommended to add it immediately after turning off the heat.
For medicinal use, the plant is used internally in the treatment of febrile diseases (especially in children), colds, flu, sinusitis, headaches, rheumatism, arthritis, digestive disorders, including abdominal distension and cramps; low libido and negativity.
It has been found useful in some types of diabetes; it is also used externally as an antiseptic to treat skin infections, blemishes, etc.
Plant juice is used to treat insect bites and ringworm or is dropped into the ear to treat earache.
The leaves can be harvested during the growing season and used fresh or dried for later use while the seeds are used as a tonic.
For the administration and dosage of parts of this plant and essential oils it is good to rely on an expert; the quantities vary depending on whether a preventive or curative therapy is followed, depending on the concentration of chemical components in the different parts of the plant, on the extraction system of the active ingredients, etc. Usually recently dried leaves are used and can also be infused both fresh and dry ones.